Sierra Leone was a sad place during my teenage years, but it was my home. For much of my life, my small West African country was torn by a civil war (1991-2002). About seven years after the war began, the rebels came to our city. My whole family was running to escape, but my parents, who were just a few steps behind me, were shot and killed. I was so sad to lose them, but I had to keep moving.  After my parents were shot and killed, my brother was abducted and slain, and I saw my sister get her legs brutally cut off.  I was next in line to lose my legs, but I prayed fervently for help, and when some government soldiers arrived, the rebels ran off, saving my life.

I was constantly on the run, trying to escape the rebel soldiers. It was terrifying every time the rebels came through a city. Someone would see their torches approaching in the night, warn the others, and we would run for the bush, grabbing whatever we could along the way. 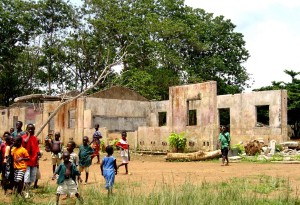 My first Sunday in that Latter-day Saint branch was a day I’ll never forget.  I learned of hope. You could just see that there was hope in those LDS people, and I was drawn to them. I was given the Book of Mormon and started reading right away. I remember hearing in church about how families could be together again after death and then reading in Alma 11 where Alma teaches about how our bodies will be made perfect again in the Resurrection. I felt the Spirit so strongly as I thought of my family members killed in the war. I knew that the Church was true and that we could be together forever-each of us well and whole.  There were no missionaries in Sierra Leone at that time (1997), so I took the lessons from my branch president and was baptized soon after.

As the war continued, the Church sent food and humanitarian kits. Everyone was so grateful even to get a small bag of rice or beans. I received a blanket and a hygiene kit that included a toothbrush, toothpaste, shampoo, soap, a comb, and a washcloth. 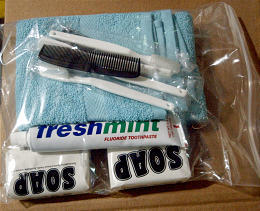 Soon, the rebels hit again and set fire to the house I was living in. As I was running to escape the flames, I took time to save only two things-my scriptures and my hygiene kit. We had to live on the run for a while, and I used my hygiene kit to help those around me.  Our group of 25 women stayed in the bush for 3 weeks.  I would squeeze out one pinch of toothpaste for each person, or we would go to the river and carefully pass my bar of soap from person to person.  I tried not to share my toothbrush! The kit was so precious to us. The blanket too was invaluable. It sheltered us for many days until I used it to wrap an old woman who had died.

When I received my humanitarian kit, my stepsister received a school kit. She was the only child in her school who had paper. Carefully, she tore out one piece for each of her friends and broke her three pencils in half, giving one half to each friend. Every day, the children would carefully write down their lessons and then gently erase everything each night so that they could use the sheet of paper again the next day. They were so grateful for the tools to learn.

Eventually, I went back to my town and my branch. It was then that I decided I wanted to serve a mission.  One thing that made me have the desire was that I felt that by serving my God, and my brothers and sisters, that I would return my gratitude to Him for saving my life. I know there is not much I can do to thank Him but that is one way by serving. And so I had the desire to serve.  But it was still a difficult decision for me, because I had nothing and would be leaving behind people I loved. As I was trying to decide, I read D&C 84:81 and 88, which say, “Therefore, take ye no thought for the morrow, for what ye shall eat, or what ye shall drink, or wherewithal ye shall be clothed … for I will go before your face. I will be on your right hand and on your left, and my Spirit shall be in your hearts, and mine angels round about you, to bear you up.”

I knew the Lord would care for me, so I turned in my mission papers and was called to the Utah Salt Lake City Temple Square Mission.  I was the caregiver for my two living relatives (my 10 year old sister and my 2 year old nephew), but my Branch President relieved my concerns for them by telling me that he would care for the children in my absence.

I arrived in Utah with practically nothing, and it was in the middle of winter.  I only had two changes of clothes in a plastic bag with my hygiene kit, and my scriptures.  It was the coldest temperature I had ever felt. I had only sandals and no coat.  The MTC President’s wife took me to a store for under-privileged missionaries to get some shoes and a coat.

One day, we were taking a tour of the Humanitarian Center and I recognized a blanket with an embroidered Relief Society logo-just like the one I’d had in Sierra Leone. I then saw hygiene kits like mine and familiar bags of beans and rice, and I began to cry.  Although I knew the church had sent them, I didn’t realize they originated here in the Center in my mission.

“This is where they came from!” I thought to myself. Tears streamed down my cheeks as I remembered what these things sitting in stacks in the Humanitarian Center in Salt Lake meant to my friends and to me in Sierra Leone, Africa. I was so grateful to the Lord for preserving me, for bringing the gospel into my life, and for allowing me to serve a mission. I knew that His angels truly had been round about me, to bear me up.

When I first arrived on my mission in Temple Square, I had no family to write me and I never received any packages, but the loving sister missionaries around me soon wrote to their mothers about my situation. It was not long until I received packages from all their mothers! I was so grateful!  Within a few weeks I was receiving more packages than anyone else!

In the course of the conversation, I discovered that the couple, who had 8 children, wanted to adopt an orphan from Africa. My heart jumped for joy as I told them about my 2 year old nephew. The couple looked uneasy and finally admitted they had hoped for a girl. I then told them about my 10 year old sister, and showed them a photo of my nephew and sister. The couple smiled. They knew they were about to meet their new son and daughter.

That was 12 years ago. My living family, consisting of my sister and nephew, are now a part of a loving family, that I also consider my new American family.  I know the Lord inspired this couple to come visit with me.  The couple later flew to Sierra Leone to adopt the children.

One day on Temple Square, I developed a strong desire to teach someone from Africa.  I went into a coat closet and poured out my soul to the Lord, and asked him to please send me someone from West Africa (who we rarely saw on Temple Square), for me to teach.  I felt a strong impression to immediately get up and run to the South Gate.  As I was running across Temple Square, I saw my mission president.  He asked me where I was running.  I told him that I was going to meet a black man and teach him the gospel! I knew in my heart that someone would be there to meet me.  Shortly after arriving at the South Gate, I met a man from Ghana, a country not far from my own country of Sierra Leone.  I was able to teach him the gospel, all in answer to my sincere prayer.

Sometimes we have to get up and run. We have to act on our spiritual impressions. We can’t just wait for the blessings to come to us.  Sometimes we have to work for them. This was certainly true in my case of meeting the man from Ghana at the South Gate, and so it is true in all of our own lives.

I have learned that God loves all His children, no matter where they may be and no matter what their circumstances are.  I have also learned not take what we have been given for granted.  I am so grateful for all that God has done for me in bringing me to this great country.  I am also so grateful for those special members in Utah who have brought me and some of my relatives into their family. 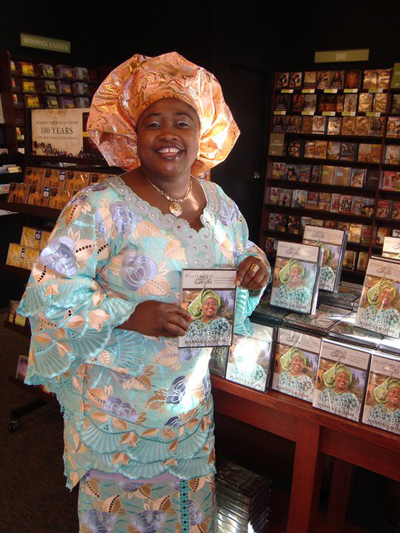 You can hear Mariama tell her story in this YouTube video

In May 2012, former Liberian president Charles Taylor, accused of participating in massive atrocities, was sentenced to 50 years in prison by  the international criminal court in The Netherlands. Taylor, 64, was accused of empowering rebels in neighboring Sierra Leone to murder, rape and mutilate thousands of people in an attempt to overthrow the government.  It is estimated that over 50,000 people were killed in the civil war. In return, prosecutors said, the Liberian president received diamonds and power.  Taylor was the first head of state convicted by an international court since the prosecution of World War II criminals at Nuremberg.

Sister Kallon, I would love to use this on our Africa West Area Website (africawest.lds.org). I am a senior missionary and help manage the website. We have so few articles from Sierra Leone. The people here would love to read this. What do I need to do to get permission. Thanks so much for posting this!

I would to have Maria Mariama speak at my Single Adult fireside and tell her story. I have left her a voice mail message but haven't received a call back. do you know how else I can reach her.