Fun and Fanciful Read in “Do Over” by Shannon Guymon

What’s a girl to do when she’s faced with irrefutable proof during her wedding reception that her new husband is deeply involved with not one, but two other women? Though so sick she simply wants to run as far and fast as she can, Iris calmly walks to the microphone, informs the guests the marriage is off, and invites them to pick up the gifts they brought to the reception on their way out. Next step, file for an annulment, then relocate to some place far away from Seattle. 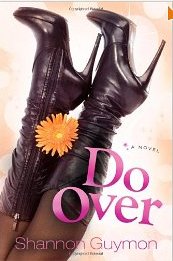 Do Over by Shannon Guymon begins with Iris’s heartbreak then quickly jumps to Alpine, Utah, where a group of women friends conspire to find a wife for a man they all admire. He is one woman’s brother-in-law and another’s former boyfriend, the man she dumped when she fell for the man who is now her husband. The sister-in-law has the perfect blonde beauty picked out, a new employee in her hair salon. Another is convinced her husband’s cousin is a better choice. They all agree to support whichever woman Trey Kellen chooses and a bet ends up being placed between the two sponsors over which woman he will pick and unfortunately his sister-in-law is a little too determined to win the bet.

Iris arrives in Alpine, moves into a house next door to her cousin, and goes on a shopping spree. She needs a complete break from her old life, she’s financially comfortable, and soon she is the proud new owner of a set of leathers and a pair of killer boots. She makes a stop at the local hair salon to have her hair trimmed and red flames added to the tips. The owner of the shop is horrified that anyone with such beautiful auburn hair would demand a style she considers a desecration. The new employee ends up fulfilling the customer’s wishes.

After Iris returns to the house her cousin rented for her next door to his own home, she realizes she needs to stock her kitchen. Before the conspiring women have a chance to act, Iris and Trey meet in the grocery store in a battle over a carton of Chunky Monkey ice cream. They’re thrown together when Trey’s brother hires Iris, a top interior decorator, to decorate the restaurant Trey and his work crew are constructing. Before they know it, Iris is under attack by Trey’s sister-in-law, her ex shows up, and a big plumber on Trey’s crew falls for her. Trey finds himself fending off the beautician and his match-making sister-in-law. Both Trey and Iris insist they’ve sworn off the opposite sex, but agree to pretend they share a relationship to get the matchmakers and Iris’s ex off their backs. A surprise visit from Iris’s well-to-do parents who take an immediate dislike to Trey further complicate the pair’s lives.

This book is light, fun escapism. We all know how romance novels end, but the journey makes all the difference and this journey is full of twists, turns, laughter, and a look at making judgments based on outward appearances. Most of the characters are likable, though some go to extremes that seem a little over the top for that particular character. The major characters make satisfying amounts of growth as they deal with their problems and attain better self-understanding in the process.

Shannon Guymon is the author of eight previous novels. She lives in Utah with her six children and is a firm believer in happy endings.

DO OVER by Shannon Guyman, published by Bonneville Books an imprint of Cedar Fort Publishing, softcover, 185 pages, $11.98, available on Kindle

I was wondering if this book would be worth buying and it sounds delightful! I've read a few other books by this author and enjoyed them all. Thanks for sharing about it.