Near Miss by Small Asteroid: Closest for a Space Rock So Large | Meridian Magazine

Near Miss by Small Asteroid: Closest for a Space Rock So Large

Scientists are projecting a near miss by a small asteroid on February 15th. The asteroid is about the size of a small office building. This might bring to mind the question of how often actual collisions occur. Collisions with small asteroids or large meteors are relatively common events, occurring about every few centuries or so. The most recent incident apparently occurred about 100 years ago.   What is much rarer is that such a collision would actually destroy a city as evidently happened to Sodom and Gomorrah anciently and which was narrowly avoided by the city of Nineveh in Jonah’s day.

The Washington Post noted that asteroid 212 DA14 is about 150 feet in diameter and crosses the earth’s orbit twice a year. It will quickly pass by within 17,000 miles of the earth at 2:24 p.m. Eastern Time on Friday, February 15, 2013. That is over 13 times as close as the moon’s orbit and closer than our geosynchronous communication satellites. Being so tiny, the asteroid was only discovered last year by astronomer Jaime Nomen of the La Sagra Observatory in southern Spain. Fully 99% of these small asteroids are unknown and very hard to detect. (Brian Vastag, “NASA: Asteroid flyby next week will be closest for a space rock so large,” The Washington Post, February 7, 2013 )

In 1908, it is believed that an asteroid or comet estimated to be about twice the size of 212 DA14 hit the mostly unpopulated area of Tunguska, in Russian Siberia resulting in few casualties and little property damage. However, it flattened an area of 800 square miles with about 80 million trees. Here is an excellent article including art work depicting this event. (William K. Hartman, “1908 Siberia Explosion: Reconstructing an Asteroid Impact from Eyewitness Accounts”) (See also Tunguska Event, Wikipedia, retrieved February 8, 2013.) 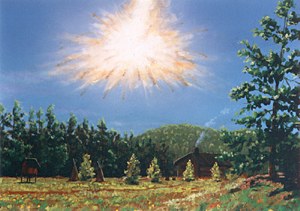 This artistic rendition shows how the Tunguska explosion in 1908 in a remote area of Russia might have looked having the energy of a 30 megaton bomb.

In our day, it is politically incorrect to say that God sometimes sends calamities when people refuse to repent and become fully ripe in iniquity. In spite of even being willing to call off the coming “fire and brimstone” event if even ten righteous could be found in those two cities, ministering angels personally evacuated Lot and his family from Sodom and then the cities of the plain were completely destroyed. (Genesis 19:25, Amos 4:11)

In another great possible example, the people of Nineveh repented after the preaching of the prophet Jonah and the calamity scheduled for that city was turned away, evidently much to the surprise and disappointment of Jonah. (Jonah 3:4, 4:11)

Both of these scriptural examples seem to fit the profile of a meteor or asteroid collision.

Even a small gravitational nudge of a small asteroid on a collision course with a city can avoid the calamity and scientists have various possible plans in mind to provide that nudge with a robotic lander or a massive spacecraft as a “gravity tractor.” So, changing the course for a large meteor that might have been on course to hit a city may be possible for even mortal man. (Robert Lamb, “Could we stop an asteroid on a collision course toward Earth?” Howstuffworks.com, 2010 )

We are assured by astronomers that 95% of kilometer-sized or bigger asteroids that could cause severe “life on earth threatening” problems will not collide in the foreseeable future. We should be grateful for the inspired architecture of the solar system with its comet/asteroid collision prevention system in place, the planet Jupiter, that protects us from frequent collisions that would destroy life on earth. Just look at the cratered moon as an example of an era before Jupiter had swept up or tossed away into space most of the asteroid and meteor blizzard believed to exist during initial phases of the creation of this world. (Ronald P. Millett and John P. Pratt, “Astronomical Event of the Century,” Meridian Magazine, January 14, 2000 )

The Lord’s preface to the Doctrine and Covenants and section 39 might be worth rereading.

“Wherefore, I the Lord, knowing the calamity which should come upon the inhabitants of the earth, called upon my servant Joseph Smith, Jun., and spake unto him from heaven, and gave him commandments;” (D&C 1:17)

“And inasmuch as they do repent and receive the fullness of my gospel, and become sanctified, I will stay mine hand in judgment.” (D&C 39:18)

I understand what you mean when you say its not PC to say that any calamity is a warning or a result of something God does..but i believe that it is...I dont believe in Global warming..ever since I was a kid or even farther back we can read that the weather was either this way or that..in texas in mid texas area it use to be so dry no grass grew and now its humid..off and on its that way...our earth is shifting and science plays a part in all things and who created science...God did...God is science...people dont realize this...He is in control..and if people die in these calamaties...well, we all die dont we...its what happens when we leave this earth and prepare still for His coming..our Savior...People chose to say how could God let this happen...well, when we leave this earth ...we are coming home...because realy we left the home we had with Him...so this earth to me is one big school preparing us to be in His presence...good and bad die...just because your good doesnt mean you wont ever die...in order to be with him we all must die...Christ died...thank you for your article I loved it...