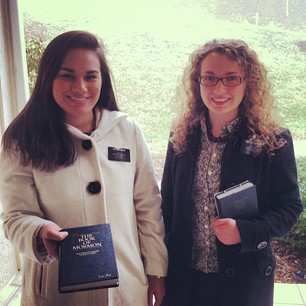 Remember when President Benson urged us to flood the world with the Book of Mormon? Okay, half of you are too young to remember that. But he did. And did we do it?

I, for one, did not do it. Yes, I wrote my testimony in a few copies, pasted in a picture, and gave them out. But would I call it flooding? Did I share them with the gusto of a new recipe? Was it done daily, with the burst of enthusiasm we now give to Pinterest or to Downton Abbey? It was not.

Fifteen years ago a clever skit about Visiting Teaching made the Relief Society rounds. Everyone loved it. We all got on the phone and told our friends in other wards that they just had to do it. And they did, by droves. As I was painting scenery for one of its productions, I commented on how this play had swept through the church like wildfire. My friend, painting beside me, said, “Wouldn’t it be great if we could do that with the Book of Mormon?” and we shared a wistful moment.

Today we’d call it “going viral.” Or having a “tipping point”-that moment when something catches on and becomes household knowledge. Think of the terrible news you share-shootings, hurricanes, scandals. We all become informed. We even join the masses when there’s good news-a flash mob, a great movie, chocolate cake in a mug.

And there sits the Book of Mormon. Without question this second witness of Christ is the greatest news since His resurrection itself. And, except for a few valiant souls and a few more converts on fire with amazement, there’s no grand hubbub. We bear testimony of it from the pulpit, we read it, we even talk about it amongst ourselves.

But do we share it? Is it the flooding President Benson was talking about?  Is it a river? Is it even a fire hose? A water pistol? How pathetic have my own efforts been in obeying prophetic counsel? Yes, I’ve given a few copies to neighbors and to various visitors in my home. But I’d describe it more as a dripping faucet than a flood. Is that how I want to describe my efforts when I’m asked to account for them?

In a recent Ensign article, President Henry B. Eyring shared the idea of praying to find someone we can present with a copy, and then taking one along with us for that very purpose. His article touched my heart, nudged my guilt, and caused me to find a purse with a perfect pocket in which to keep a paperback copy. In fact, this is how I shall buy all my future purses. I want a zippered pocket where I can tuck one away and protect it, rather than toss the book in with the jumble of keys, pens, and chewing gum in the main section.

And off I went. I wanted to give one to a store clerk I’d been talking with about my son’s temple marriage. One for my nail lady. One for a woman I chatted with about her efforts to quit smoking. A Farsi one for my Iranian hairdresser. Suddenly I could think of nothing but people who needed that book!

On the way to a baptism I unzipped the pocket, thinking to take the book out and lighten my load. After all, a baptism would be members, right? Then I felt impressed to leave it be. Sure enough, I found myself walking across the refreshments room to a young man who seemed somewhat uncomfortable in our building. He and another fellow were divinity students of another faith, simply attending out of courtesy to their roommate. We began a lengthy discussion that ended with one of them asking where he could read more. Ta da! Many baptisms include friends and family who would love to know what made their pal enter the waters of baptism that day. And you can give them the answer.

I heard of a woman who keeps a basket of books by her front door. After all, they’re incredibly inexpensive. No plumber, salesman, or visitor enters without receiving a copy. I gave one to my daughter as she boarded the plane for the MTC a couple of weeks ago. “You never know who you’ll meet on the plane,” I said, “and you may as well start your missionary work right now.”

It has changed the way I go through my day. I’m a friendly woman on the lookout, not just someone running errands. I’m seeking inspiration. I’m trying to set a good example so that when I do bring up the book, people are receptive. I have purpose beyond my “to do” list.

Does it work every time? Nope-one clerk told me she’s already an apostle for the Lord, and another told me she loves the church she already attends. And that’s okay. My assignment isn’t to insure the outcome; it’s simply to extend an invitation. I’ll tell you this-not one individual has recoiled with the horror we all fear and use as a mental excuse to hold back. Every one of them knew I was sincere and responded kindly.

We just have to set a goal. If you gave out one book a day, wow-that’s 365 books! That’s some serious flooding. Even one a week, that would be 52 — a pretty good soaking, I’d say. What if you bought one of those clear backpacks-or sewed on a clear pocket-and then put a few copies of the Book of Mormon inside with a note that said, “Free-Take One”? People might tap you on the shoulder and request one! After Mitt Romney’s run for the presidency, is there anyone left who hasn’t at least heard of Mormonism? And there you are, with something they’ve already wondered about.

Back in the October Conference of 1988 President Benson said, “We must flood the earth with the Book of Mormon-and get out from under God’s condemnation for having treated it lightly. (See D&C 84:54-58.)…Some of us may not live long enough to see the day when the Book of Mormon floods the earth and when the Lord lifts His condemnation. But, God willing, I intend to spend all my remaining days in that glorious effort.” I say we pull on some galoshes and get to work.

Her latest three novels, “JUNGLE,” “SISTERS IN THE MIX,” and “PINHOLES INTO HEAVEN” are all available in paperback at Createspace.com, and on Kindle at www.mormonbooksandauthors.com.

Hilton has written 20 books, three award-winning plays, and is a frequent public speaker and a former TV talk show host. She is also the author of the “As the Ward Turns” series, “The Ten-Cow Wives’ Club,” and “The Power of Prayer.” Hilton is a frequent writer for “Music & The Spoken Word,” many national magazines. She is married to TV personality Bob Hilton, is the mother of four, and currently serves as Relief Society President in her ward in northern California.

Thank you for that inspiring story. It was just what I needed to jump start myself. I like the backpack idea so it is always on my person. I have a little back pack from my NZ mission which I will carry with me.

I have never responded to any article before this but felt inspired by what I have just read. I am kinda excited to begin this challenge. I have always been very shy about sharing the gospel but I have truly felt the spirit touch my heart tonight through this article. Thank you much.