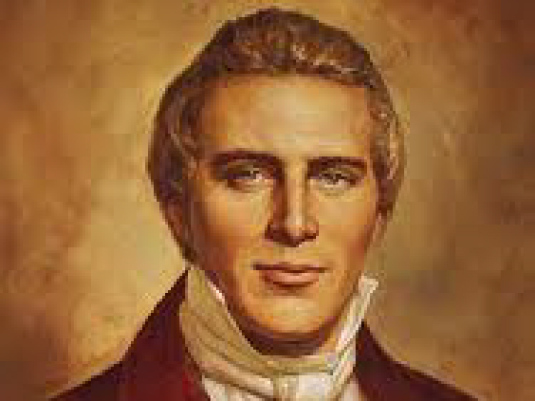 Mark L. McConkie compiled hundreds of eye witness accounts of Joseph Smith to create his book Remembering Joseph: Personal Recollections of Those Who Knew the Prophet Joseph Smith. Today we share six of these reflections from those who knew him.

Joseph Smith said that God had given him the key of knowledge by which he could trace any subject through all its ramifications.

I soon went to Nauvoo-became acquainted with the Prophet-heard him preach and saw him conduct the April Conference of 1840. The power and wisdom that he displayed on this occasion was more evidence . . . I have studied the Gospel as revealed by Joseph Smith and wondered if it were possible for any one unaided by the spirit of God to have revealed such a system of salvation and exaltation for man. My conclusion is in the negative.

I sat and listened to his preaching at the stand in Nauvoo a great many times when I have been completely carried away with his indescribable eloquence-power of expression-speaking as I have never heard any other man speak-I have heard him prophesy many things that have already come to pass, I have seen him translate by the Seers stone. I was present when he received a revelation on priesthood; he blessed me and prophesied that on my head, which has been literally fulfilled; and I have seen him by the aid of the Spirit of the Lord, as a prophet raised up to usher in the dispensation of the fullness of times; besides this, the work and the workings of it, have been made manifest to me by the good spirit. . . .

While thus engaged [as Joseph Smith’s secretary], I had many very precious opportunities great and Small, almost every day, were calling on him, some for one thing, and some for another.-polititians and preachers and of different persuations-some with the view of testing the depth of his knowledge and, if possible, confounding him and putting [him] to shame. Well, what did I discover-that he was equal to every occasion, that he had a ready answer for all questions. I heard him say that God had given him the key of knowledge by which he could trace any subject through all its ramifications.

I had heard it remarked that Joseph Smith was Sidney Rigdon’s cat’s paw: soon after he returned from the East he came to see Joseph, and the thought went through my mind: now I will see, who the cat’s paw is.-well, I did see; after passing the usual compliments, Rigdon said to Joseph:-“When I was preaching in Philadelphia after I had finished my discourse a man stepped up to me and desired me to explain something in John’s Revelation, mentioning at the same time what it was)-“Well, I could not do it, how is it Joseph?” Joseph cited him at once right offhand to a passage in Ezekiel and something in some other book of the old Testament, saying that they explained all about it.” I thought to myself, that don’t look much like Joseph’s being a cat’s paw. [A cat’s paw is a 19th century colloquialism meaning “dupe” or “fool.”]

In 1836… I attended one of the meetings where Joseph Smith, Martin Harris and John Smith were present. Martin said there would not be a living Gentile on the earth in four years. Joseph reproved him and said, “Brother Martin, you are too fast; after messages are sent with lightning speed, with iron carriages drawn by iron horses snorting fire and smoke, with less speed than the messages were carried, then, it may do to talk about the time for the destruction of the Gentiles. But before that takes place they will make wonderful improvements in machinery of every kind, especially implements of husbandry for the working of the land and raising grain, saving a great deal of labor to the saints in building up the kingdom. The Lord will inspire the Gentiles to do this, but they will not acknowledge his hand in it, nor give him the glory, but will take the glory to themselves, and when their destruction comes the wicked will slay the wicked; the saints will not destroy the Gentiles, they will be divided among themselves and destroy one another. But the time is with the Lord. The benefits of all their ingenuity and inventions will be the means of advancing the building up of Zion with greater speed. The Lord will have the glory.”

Note: Some may feel Joseph alludes to trains-“iron carriages drawn by iron horses snorting fire and smoke.” Note, however, that trains existed in Joseph’s day; indeed, the earliest and most primitive trains existed even before his birth, and some were in commercial operation during his life time. For that matter, Joseph himself rode on a train in July 1836 (Joseph Smith, History of The Church of Jesus Christ of Latter-day Saints, 7 vols., 2d ed., edited by B. H. Roberts [Salt Lake City, Utah: The Church of Jesus Christ of Latter-day Saints, 1932-51], 2:436). Others of the early Saints did as well. Perhaps this is a reference to cars and trucks, or for that matter, something not yet invented. The significant dimension of what Decker mentions, it seems, is the timing of the destruction of the gentiles as something that follows dramatic technological advancement, and the fact that they will not be destroyed by the Saints but that “they will destroy one another.”

We should post ourselves regarding the prophecies that have been predicted. I will mention one in particular that was uttered by the Prophet Joseph Smith, he said the time would come when none but the women of the Latter-day Saints would be willing to bear children.

One day the whole kingdom will rest on Brigham Young’s shoulders.

I was living with Joseph Smith Jr. and had completed the translating room and had seen many new brethren, and had heard Joseph speak many things concerning them, but no observation sunk with such weight on my mind as the one that he made about Brigham Young and Joseph Young. Some time in the month of Nov. 1832, these men came to Joseph Smith in the evening and sung and prayed with us. After they had gone from there Joseph Smith said to me, “how do you like the men?” or something near it. After he had got my answer he said, “these are good men,” and “there is Brigham Young, [he] is a great man and one day the whole kingdom will rest upon him; and there is the smaller one, he is a great man, but his brother [Brigham] is greater.

According to a vision he saw, Joseph made a map for the Saints to follow in their trek to the Rocky Mountains.

Monday Sept. 27th [1897] . . . I met that day, at the Hall of Relicks, Hopkins G. Pendar an old Nauvoo Mormon, and from him learned that Joseph Smith just before he was killed, made a sketch of the future home of the saints in the Rocky Mountains, and their route or road to that country as he had seen in vision; a map or drawing of it.

Joseph knew he would be martyred before the event occurred; he went to Carthage to save the Saints.

I have just learned from Brother Peter W. Cownover another evidence of the certainty in the Prophet’s mind that he was going to Carthage to be slain as a sacrifice for the Saints.

Brother Cownover had been to Carthage in charge of prisoners arrested by the county sheriff, and when he reached that place he and the prisoners were all thrown into jail together, without judge or jury, and after they were liberated he returned to Nauvoo, and arrived just as Joseph was starting for Carthage. After usual salutations, Brother Cownover asked Joseph where he was going.

“I am going to Carthage to give myself up,” was his reply.

Brother Cownover said, “If you go there they will kill you.”

“I know it,” replied the Prophet, “but I am going. I am going to give myself for the people, to save them.”

My father was living in a good hewed log house in 1840 when one morning as the family all sat at breakfast old Father Joseph Smith, the first Patriarch of the Church and father of the Prophet Joseph, came in and sat down by the fire place, after declining to take breakfast with us, and there he sat some little time in silence looking steadily in the fire. At length he observed that we had been driven from Missouri to this place; with some passing comments, he then asked this question: “And how long, Brother Huntington, do you think we will stay here?” As he asked this question I noticed a strange, good-natured expression creep over his whole being-an air of mysterious joy.

“We will just stay here seven years,” he answered. “The Lord has told Joseph so-just seven years,” he repeated. “Now this is not to be made public; I would not like to have this word go any further,” said the Patriarch, who leaned and relied upon his son Joseph in all spiritual matters as much as boys generally do upon their parents for temporalities. There were then two or three minutes of perfect silence. The old gentleman with more apparent secret joy and caution in his countenance said, “And where do you think we will go to when we leave here, Brother Huntington?” Father did not pretend to guess; unless we went back to Jackson County.

“No,” said the old Patriarch, his whole being seeming to be alive withanimation. “The Lord has told Joseph that when we leave here we will gointo the Rocky Mountains; right into the midst of the Lamanites.”

This information filled our hearts with unspeakable joy, for we knew that the Book of Mormon and this gospel had been brought to light more for the remnants of Jacob upon this continent than for the Gentiles.

Father Smith again enjoined upon us profound secrecy in this matter and I don’t think it was ever uttered by one of Father Huntington’s family. The history of Nauvoo shows that we located in Nauvoo in 1839 and left it in 1846.

The Church did move to the Rocky Mountains into the midst of the Indians or Lamanites-or more properly speaking the Jews-and here expect to live until we move to the spirit land or the Lord moves us somewhere else.

Then we sat down to our mush and milk, and after eating, the men went out to hitch up their teams, and Joseph took his hat and stepped out into the yard. We boys followed close at his heels, and he turned around and said, “Boys, you think I am a Prophet, and want to hear all I have to say. Now,” said he, “if I should tell you all I know that will come to pass within twelve years, perhaps there would not one of you believe it, and would apostatize from the Church. But I shall let you learn things as they happen, then most likely you will all stand in the Church.”

This saying of course caused me to watch what transpired in the following twelve years. About the first thing that took place after that was the great apostasy in 1837; next we were driven out of Kirtland; and Joseph was obliged to flee for his life; next Joseph and his brethren and the whole Church were driven out of Missouri; next Joseph and Hyrum were murdered; afterwards the entire Church were driven from Nauvoo, which history you are familiar with; all this inside of twelve years, and ten thousand other things besides! 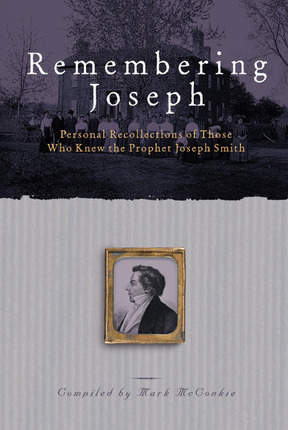 Not sure how the Bro McConkie could have made such a mistake with the title of the article being "Eyewitness Accounts" when Lillie Freeze was born in Utah in 1855 (based on her death certificate online) so she could not have been an eyewitness.