The BYU Jerusalem Center for Near Eastern Studies (often simply referred to as the BYU Jerusalem Center) was first announced publicly on October 24, 1979, when President Spencer W. Kimball visited Jerusalem to dedicate the Orson Hyde Memorial Gardens, located on the Mount of Olives. The church had donated money to beautify the Jerusalem area, and officials of the Jerusalem government were present at the occasion. It was at this dedication that President Kimball took the opportunity to announce the church’s desire and intention to eventually build a center for BYU students to live and study in the Holy Land.

In the Spring of 1980, some three years after his release as a mission president from the Johannesburg South Africa Mission (at that time, the only mission in all of Africa), and just months after President Kimball’s announcement at the Orson Hyde Memorial, Robert P. Thorn of Bountiful, Utah,  was asked to come meet with Elder Hunter of the Twelve.  At this meeting, Robert was asked to move to Jerusalem to help the Church acquire official governmental recognition as a religion and then to also help the Church locate and acquire the legal rights to build the Jerusalem Center for Near Eastern Studies. 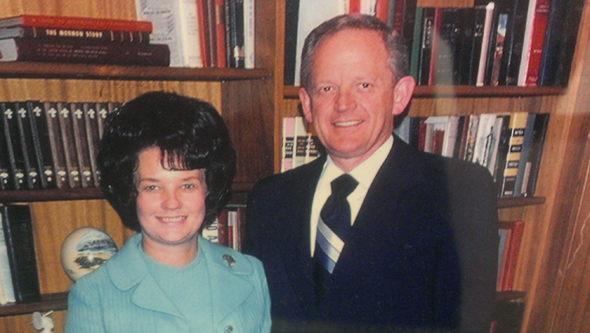 Robert had an MBA from the Harvard Business School and had been President of Thorn Construction Company, as well as a former respected mission president. His association with government leaders in South Africa had resulted in him being named honorary consul of South Africa to Utah.  It was obvious that he was well qualified and would feel comfortable dealing with governmental leaders.  He had also served as president of the BYU Alumni Association and had a great love for the school.  Everyone who knew him recognized him as one of the most eloquent and gifted speakers in the Church.  Of the thousands of qualified members who could be given the task to move to Israel and help with an almost impossible assignment of obtaining the necessary church recognition from the Israeli government, it was determined that Robert Thorn was the man for the mission.

Little did Robert know at the time that this project would require his intensive efforts for the next five years, with over 22 trips to Jerusalem, but he soon became an articulate and knowledgeable spokesperson to spearhead this important and challenging project.

Upon arriving in Jerusalem, Robert was given a list of 30 potential construction sites for the Center.  One by one he eliminated them as possibilities until only one site remained, a special 5 acre parcel located high on the southwestern side of Mount Scopus next to the Mount of Olives overlooking the Old City and the Eastern or Golden Gate. Robert had no way of knowing at the outset that he would need to live in Jerusalem full-time for almost two years. (Granddaughter, Kerry Jackson, biography of Robert Thorn).  Robert started to focus all of his energies on obtaining the rights to build on this site, which is located at the juxtaposition of Mount Scopus and the Mount of Olives in Jerusalem, Israel.  It is believed that this is the same site where Titus the Roman general had his headquarters during the siege and ultimate destruction of Jerusalem in A.D. 70.

This particular piece of real property had been acquired by Israel during the Six Day War of 1967 and could not be sold under Israeli law. Robert and the church leaders eventually decided to obtain a lease on the land instead of pursuing an outright purchase. Leasing the land also helped mitigate various legal concerns, and was seen as beneficial for various political reasons by Israeli government officials.

Robert had the difficult task of gaining multiple approvals for the proposed BYU project through the Israeli Knesset and from local politicians, including Mayor Teddy Kollek.  Many of the Church’s friends in high places said, “Forget it! There have been far more powerful and influential organizations than yours who have sought to obtain that land for their own building projects-contractors, politicians, even Muslims seeking to have it returned to them-and all have failed.”  Kollek supported the Center, arguing that “the Mormon Church’s presence in Jerusalem can do a great deal of work in providing the bridge of understanding between the Arab and Jews…because its members look with sympathy and understanding at both sides.”

Perhaps the first miracle was the process of convincing Jerusalem’s leaders to even entertain the proposal. There were all kinds of committees that Robert had to meet with, such as the Beautiful Jerusalem Committee, the Beautiful Israel Committee, various citizen committees, and the Jerusalem Land Authority, all committed to ensuring that special sites in Jerusalem were not turned over to ugly high-rise or inappropriate commercial building projects.

Additionally, there were the Muslim community and the Orthodox Jewish community that had to be convinced <span style="letter-spacing: -0.

From the beginning, the BYU project seemed out of the question from every vantage point. Fortunately, President Kimball, President Tanner, President Hunter, Bob Taylor, David Galbraith, Robert Thorn, and a few select others had the vision, faith and talents to pursue the project to a successful conclusion.  The value of Robert’s service was immeasurable.  He made some 22 trips to Israel over a five year span to accomplish a great miracle against heavy and continual opposition, and eventually had his wife Norma join him in the Holy Land for a short time. It was amazing how one committee after another responded to his presentations with a comment such as, “Yes, we could support a project like that.”

Negotiations between the church and the Israeli government stretched on from 1980 through 1984. Robert made repeated trips to Israel during this entire time. The Orthodox Jews feared the Mormon reputation for missionary work.  Eventually the Church and BYU agreed not to perform missionary work or allow its students to proselyte in Israel.  Out of a desire for peaceful interfaith relations, BYU specifically agreed with the government of Israel that the Center would be used exclusively for educational and cultural activities.  By August of 1984, the church had finally acquired a leasehold interest in the land on a 49 year lease, building permits had been obtained, and construction on the building itself commenced.

When the Church’s enemies finally saw the cranes and equipment commencing construction on the church’s prized five acre site on the Mount of Olives, the heated opposition started anew, but with even greater intensity.  Those opposed to the project tried hard in every possible way to stop the construction.  They attempted to find any possible legal mistake, oversight or administrative loophole to stop the work from progressing.  But Robert had carefully dotted every “i” and crossed every “t”.  Not a single mistake had been made in the extremely complex and lengthy acquisition and approval process. Protests and opposition to the building of the center springing from various organizations made the issue of building the center a national and then an international issue.

Warnings in the Israeli media led to street protests and demonstrations. Orthodox Jews marched on City Hall and at the construction site in 1986. Some even gathered at the Wailing Wall in a public prayer of mourning because of the center.  After several investigative committees looked into the matter, the Israeli Knesset also reviewed and debated the issue at the request of Israeli Prime Minister Shimon Peres. Former President Gerald Ford even spoke out in favor of BYU.  Fortunately Israeli officials eventually decided to allow the center’s construction to continue in 1986.

The center finally opened to students two years later in May 1988 and was dedicated by President Howard W. Hunter (then President of the Quorum of the Twelve Apostles) on May 16, 1989.  This was very appropriate, since it was Elder Hunter who, some 9 years earlier, had first interviewed Robert and extended to him the assignment from the First Presidency to spearhead the project.  As an expression of their gratitude, the Brethren later flew Robert and Norma Thorn to the Holy Land to see the completed building.  It was gratifying for the Thorns to finally be able to enjoy the fruits of their labors that had started almost a decade earlier.

The 125,000 square-foot, eight-level structure is set amid five acres of beautifully landscaped gardens. The first five levels (moving up from the lowest level) provide dormitory and apartment space for up to 160 students, dormitory rooms accommodate four people with ample study space and each of these rooms has a patio overlooking the beautiful Old City. The sixth level houses a cafeteria, classrooms, computer facilities, and a gymnasium. Administrative and faculty offices are located on the seventh level, as is a 250-seat auditorium. The main entry is on the eighth level, which also contains a spectacular recital and special events auditorium with organ, lecture rooms, general and reserve libraries, offices, a domed theater, and a learning resource area.  Robert was also instrumental in helping to raise the private funds necessary to purchase the spectacular Scandinavian-made Marcussen organ for the special events auditorium. 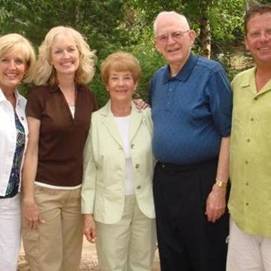 When it was finally evident that his services were no longer needed, Robert eventually packed up and returned home to Bountiful, Utah to his supportive wife Norma and family.  His involvement in the project spanned over 5 years.  Other more well-known figures were also instrumental in the success of the project include Robert C. Taylor, director of the BYU Travel Study program, and David B. Galbraith, the director of BYU’s program in Jerusalem from 1972 until 1987 when he was asked by the First Presidency to take on the responsibility of organizing the BYU Jerusalem Center. Literally hundreds of others made major contributions.  Brother Galbraith noted that it would take chapters to do justice to their respective contributions toward the establishment of the Jerusalem Center. However, Elder Howard W. Hunter, Elder James E. Faust, and then BYU President Jeffrey R. Holland deserve special note since they comprised the executive committee appointed by the First Presidency to oversee the establishment of the Jerusalem Center. Additionally, President Gordon B. Hinckley was intimately involved with multiple recommendations, approvals, and final decisions.

Robert deeply appreciated the opportunity that the First Presidency had given to him to be of service in so great a cause.  He was a team player, and the Lord used his special talents and gifts to help make the dream of a BYU Jerusalem Center become a reality.   He knew the Lord’s hand had been abundantly evident in overcoming every obstacle that arose in his path. The BYU Center has been a unique blessing to thousands of visitors and students since its dedication.

Of Robert Thorn, perhaps it can be said, as Esther of old, that he was raised up for a time such as this.

In my mind at least, he is one of the unsung heroes of the Jerusalem Center.Some may ask why I have chosen to focus this article on Robert Thorn, rather than on some other important figure in the development of the Center.  The answer is because Robert Paul Thorn of Bountiful, Utah, was my mission president as a 19 year old serving in the Johannesburg South Africa Mission. Since his passing last week at the age of 83 (1929-2013), I have wanted to pay tribute in some small way to honor this great man who had such a profound influence on my life,  the lives of his beloved missionaries, and the BYU Jerusalem Center.

1.The Jerusalem Center for Near Eastern Studies: Reflections of a Modern Pioneer by David B. Galbraith and Blair G. Van Dyke The Educator Vol 9 No 1 2008

3.Interview with Kerry Jackson, granddaughter of Robert P. Thorn, and co-author of his autobiography.

4.Personal interviews by author with Robert and Norma Thorn