The Twelve Dogs of Christmas Written and Directed by Kieth Merrill 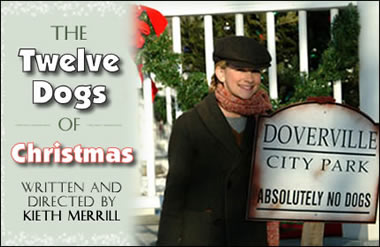 I’ll admit that I couldn’t possibly do an unbiased review on a movie directed by Kieth Merrill.  It’s not only because I was dissolved to tears and nearly wailing out loud in both Legacy and Testaments of One Fold and One Shepherd so I am prepared to like what Kieth does.

I’m also entirely biased because when Meridian was about to launch, I called him while he was in a parking lot on his cell phone and I said, “Kieth, I’m not sure if you remember who I am, but we are starting a magazine called Meridian.  Right now we have about two readers – my husband and me – and we can offer no pay. How about spending hours and hours of your life writing as the film editor with no guarantee that it will ever work? Kieth said yes – and my bias toward him went straight over the top.

But beyond all that, I frankly like Kieth’s heart. He thinks Hollywood has lost its touch with America – with people like me who love to get wrapped around a good story, who weep, laugh and find joy in feeling warmed by characters we come to love. So he sets out not only to make that kind of film but to champion it. 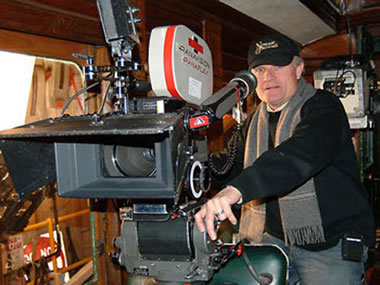 That’s why I was excited that The Twelve Dogs of Christmas, a new family film written and directed by Kieth, became available November 1, and I was rather dogged to get my paws on a copy.

This is a direct-to-video film, sidestepping a theatrical release.  Producer Ken Kragen shopped the $1.75 million film to the networks and studios but found little interest in a G-rated film.

According to the Los Angeles Times, “Even ABC Family told him that its prime-time target audience is adults 18 to 34 years old.  To get a more appealing PG-13 rating, people suggested they ‘add a cuss word or two’ but Kragan held firm.”

How It All Began

The idea that became the film all began when then 7-year-old Emma Kragen wrote a new version of “The Twelve Days of Christmas”  on a restaurant placemat – only this time the gifts were dogs – including “five golden retrievers” to replace “five golden rings.”   Her enchanted father took the words to a publisher friend of his, and the placemat became a picture book for kids, which sold close to half a million copies. 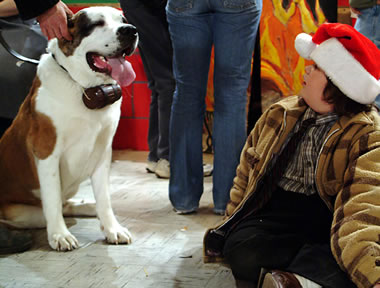 The journey to film was a little more challenging – as such journeys are – but there came a day when Ken Kragen handed the twelve-page, mostly picture book to his friend, Academy Award winner, Kieth Merrill, and asked him if he could make a film out of it.

Film adaptations from books often struggle with too much material.  Avid Harry Potter fans are ready to pounce when the most delicious scene from the book is omitted from the movie.  But in this case, Kieth wondered how to make a film out of 12 mostly-picture pages.

That’s when he locked himself in his room with a stack of Power Bars for brain food and came out 14 days later with a unique and charming story idea turned into a script.

It is the 1930’s, a grim, impoverished time, when Emma O’Conner’s father tells her she must go live with her Aunt Delores in small-town Doverville for a time until he gets on his feet.  He promises he’ll come for her before Christmas.

She’s crestfallen, and feels even more alone when Aunt Delores is less than thrilled to see her – and is no blood relation but her father’s ex-girlfriend who thinks he’s a rat.  What saves the day and Emma’s loneliness is a dog that she adopts and keeps hidden in her bedroom.

Yet, Aunt Delores’ discovery of the dog is not as bad as the ‘no-dogs law’ the mayor has created.  Dogs are not safe in Doverville as long as the dog catcher, who happens also to be the mayor’s brother, is around.  He is both foppish and relentless, determined that no dog will live in the town. 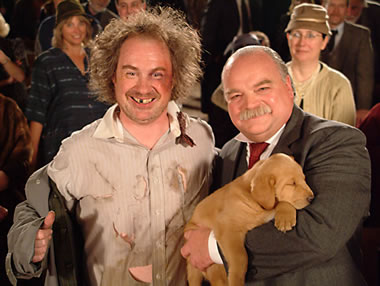 How Emma solves the dilemma and turns the town law on its head makes for a heartwarming tale, and brings in a variety of lovable characters – including the unmusical coach who in an emergency becomes the director of the Christmas pageant and the woman, Cathy Stevens, who saves dogs and runs an orphanage for them just beyond the town boundaries. 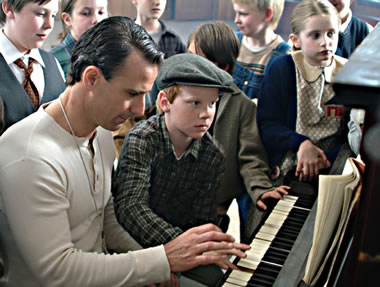 It is a fun, heart-warming story that brings a diverse canine cast of more than 101 pooches – only one of them professionally trained.

The Twelve Dogs of Christmas was among only three chosen to be shown at the recent Heartland Film Festival, a gathering to promote “truly moving films.”  Dick Rolfe, founder of the Dove Foundation, was there and said, “At the risk of redundancy, his movie is a classic family classic; sure to be around for a long time. I watched a big-screen showing of this film, in the presence of 300 people, most of whom were under the age of 12.  The end was met with spontaneous cheers and applause from the captivated attendees, myself included.” 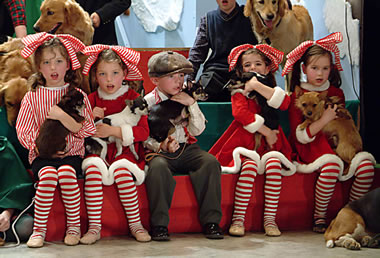 When we watched the movie, we decided to put it to the acid test.  Since Kieth said he made this movie “for the kids”, we invited our 10-year-old Michaela to watch and give her honest opinion.

We liked the winning ways of young actors Jordan-Clair Green and Adam Hicks, two misfits who banned together to foil the bad guys, and it was especially charming to be transported to another world as small-town 30’s was portrayed.

Here’s a movie with children, dogs, snow and Christmas, playing upon the nostalgia of another era.  It is an unbeatable combination for viewers, but a bit of a headache for the filmmakers. 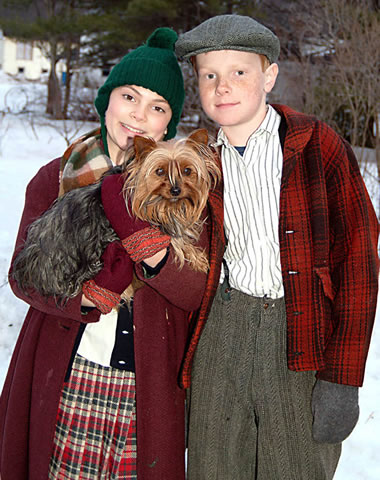 Filmmakers know that it is a headache to work with children on the set, even more difficult to add a dog – but more than 101 dogs?  The movie was filmed in Bethel, Maine, and ads were run in the local newspapers for pet owners to bring their dogs for roles in the movie. It was, of course, a motley crew that arrived.

Then there was the challenge that in far-north Maine, at 70 degrees, there was no snow – and all the snow had to be manufactured and brought in from local ski resorts.  Rain became a constant making mud an extra challenge.

“Day One of the shoot: The antique cars imported from Kansas City, Mo., didn’t run and had to be rolled downhill – or pulled by wires – for moving shots; the second-unit camera malfunctioned, costing $1,500 to replace; and when the steady-cam operator tripped, the camera broke open and much of the morning’s footage was lost. On Day Two, a dogsled hit a pipe submerged in the snow and was cut in half. (Stunt doubles were not hurt.)”

All in all it took two as resilient as Kieth Merrill and Ken Kragen to pull off this delightful film.

I guess somebody in the world must still like G-rated films.

To see a photo essay from the movie click here. To learn more about the movie or to order it, go to www.12DogsofChristmas.com.