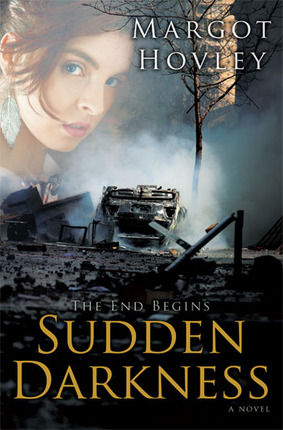 Once in awhile a book written for teens draws enough adult readers to catch my attention. Such is the case with Sudden Darkness by Margot Hovley. In a sea of dystopian young adult novels, this one stands out because it is written especially for Latter-day Saint readers and it is also a “last days” novel. Because the target audience is teenagers, the language is a little simpler than in adult books and the main characters are sixteen and seventeen. The theme is one that will catch the attention of adults as well as younger readers as the author explores a modern twist on events leading up to the Second Coming. It can also be taken as a subtle reminder this Thanksgiving to take a look at the blessings we take for granted.

Amelie Hatch lives in a rural area in eastern Washington state with her parents and younger brothers. Injured in an accident as a small child, she walks with a heavy limp and has a bit of a chip on her shoulder about her disability. The one person who understands is the teenage boy on the neighboring farm who is her best friend. Zack’s father, who strongly opposes the Mormon faith, long ago placed a condition on their friendship; she and her family must never speak of their religion to Zack.

Amelie’s father is called away by Church leaders just before a major disaster strikes the area. The nuclear facility at nearby Hanford is compromised by a terrorist explosion of an EMP bomb over America that wipes out all electronic equipment leaving fear of a radiation leak. In time they learn the whole country is affected, Washington D.C. has been decimated and the president and most of congress are dead, power is out everywhere, and only the oldest cars and trucks will run. Thieves raid farm gasoline tanks and steal older equipment. Zack’s father is murdered as he tries to protect his old farm truck.

A call comes from the stake president for all of the LDS families to go to Salt Lake. With only a few old farm trucks to carry food and supplies and a limited amount of gasoline that hasn’t been stolen, the members who choose to heed their stake president’s call begin the long trek. Because of her leg, Amelie is invited to ride on an old flatbed truck reserved for the sick and handicapped. She refuses to ride and makes do with her cane and her friend Zack’s arm. He thinks the Mormons are crazy to attempt such a long walk, but with his father gone Amelie and her family are the closest he comes to having a family. Besides with her father away, he figures Amelie and her mother need more help than just her little brothers.

A modern day trek on foot by a large group beset by gangs, terrorist threats, bad weather, discouragement, some whose faith falters, a mountain range and the Columbia River to cross makes this a modern pioneer trek that opens many possibilities of thought. Teenagers suddenly thrust into performing adult roles, are dealing not only with the questions teenagers of our day face but are expected to suddenly assume responsibilities never previously expected from them.

Those perpetrating the attack are never identified which is a little disappointing, yet for the story’s purpose perhaps it’s enough to know that without phones, radios, TV’s, or any other electronic gadgets those called to leave their homes and flee to Salt Lake know little about the nature of the attack or future threats, but must act on faith.

The characters are realistic and their growth and increasing maturity is handled well. The plot is filled with both action and introspection with a slightly more satisfying ending than found in most dystopian novels. It neatly ends this phase of the story, but immediately opens up the problems and tragedies the characters will face in the next volume of what is bound to be a series.

Margot Hovley grew up in rural Washington State, but now lives in Utah. She teaches music, writes, and enjoys telling stories. She loves hiking and traveling.