How the Faithful Voted: 2012 Preliminary Analysis

This is a project of  The Pew Forum on Religion and Public Life. 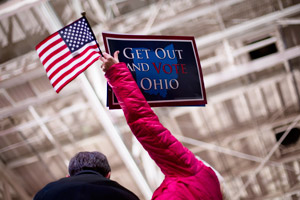 In his re-election victory, Democrat Barack Obama narrowly defeated Republican Mitt Romney in the national popular vote (50% to 48%)1. Obama’s margin of victory was much smaller than in 2008 when he defeated John McCain by a 53% to 46% margin, and he lost ground among white evangelical Protestants and white Catholics. But the basic religious contours of the 2012 electorate resemble recent elections – traditionally Republican groups such as white evangelicals and weekly churchgoers strongly backed Romney, while traditionally Democratic groups such as black Protestants, Hispanic Catholics, Jews and the religiously unaffiliated backed Obama by large margins.

Vote Choice by Religion and Race

Religiously unaffiliated voters and Jewish voters were firmly in Obama’s corner in 2012 (70% and 69%, respectively). Compared with 2008, support for Obama ticked downward among both Jews and religiously unaffiliated voters in the exit polls, though these declines appear not to be statistically significant. Both of these groups have long been strongly supportive of Democratic candidates in presidential elections. Black Protestants also voted overwhelmingly for Obama (95%). 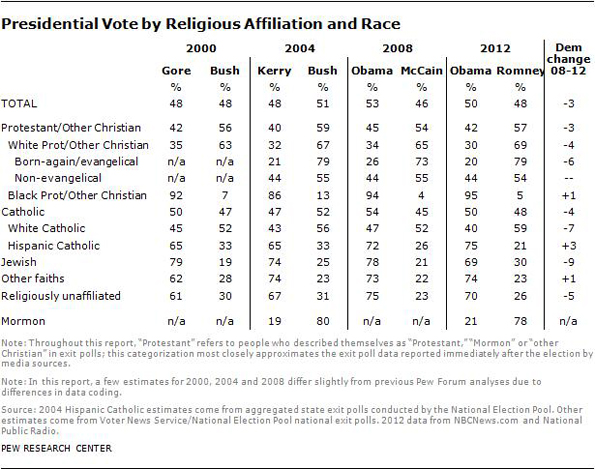 At the other end of the political spectrum, nearly eight-in-ten white evangelical Protestants voted for Romney (79%), compared with 20% who backed Obama. Romney received as much support from evangelical voters as George W. Bush did in 2004 (79%) and more support from evangelicals than McCain did in 2008 (73%). Mormon voters were also firmly in Romney’s corner; nearly eight-in-ten Mormons (78%) voted for Romney, while 21% voted for Obama. Romney received about the same amount of support from Mormons that Bush received in 2004. (Exit poll data on Mormons was unavailable for 2000 and 2008.)

As in other recent elections, those who attend religious services most often exhibited the strongest support for the Republican presidential candidate. Nearly six-in-ten voters who say they attend religious services at least once a week voted for Romney (59%), while 39% backed Obama. Romney received as much support from weekly churchgoers as other Republican candidates have in recent elections. 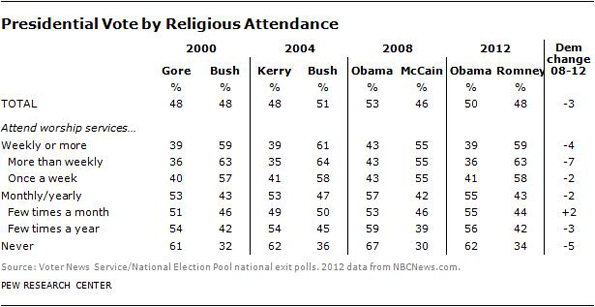 Religious Composition of the 2012 Electorate

The religious composition of the 2012 electorate resembled recent elections, though there are signs that both the white Protestant and white Catholic share of the electorate are gradually declining over the long term. 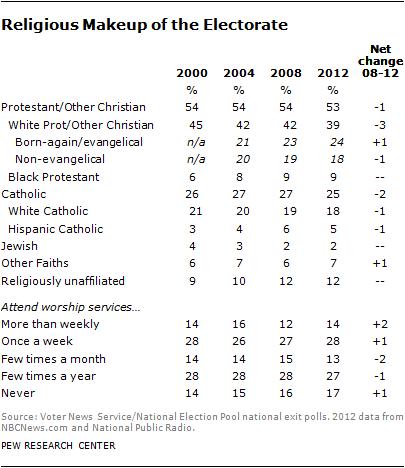 1 This preliminary analysis reflects data for 2012 as published by NBCNews.com as of 10:15 a.m. on Nov. 7, 2012. If data are subsequently re-weighted by the National Election Pool (NEP), the consortium of news organizations that conducts the exit polls, the numbers reported here may differ slightly from figures accessible through the websites of NEP member organizations. As in previous years, the Pew Forum on Religion & Public Life plans to conduct a more detailed analysis of religion in the 2012 campaign once the raw exit poll data become available. (return to text)