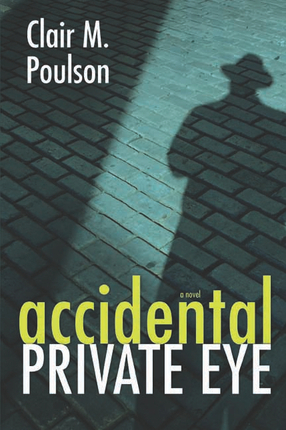 Dallas Rowen, a recent army veteran, has had a run of bad luck leaving him without an apartment, broke with no job, hungry and discouraged. Someone makes a simple false assumption or perhaps is following an inspired prompting and suddenly Dallas has a job, money, and a place to stay, but he questions whether he has a right to say yes to the biggest opportunity of his life. So begins Accidental Private Eye by Clair M. Poulson.

Dallas is merely leaning against a wall reviewing his miserable situation with less than two bucks in his pocket and no job prospects following losing his wallet, credit cards, and almost everything he owned except a few clothes that fit in one small suitcase, and his truck following finding his apartment burglarized. His cell phone has been turned off and he can’t even afford gas for his truck. An older woman walks up to him, hands him $1200 and says she wants him to find the person who murdered her grandson. He tries to explain that other than reading a lot of detective novels, he knows nothing about being a private investigator. The woman won’t hear him out or take no for an answer. When he discovers the wall he’s leaning against is next to the door of a PI’s office he understands the mistake, but he needs the money, and makes up his mind to fill the woman’s expectations.

He launches his investigation beginning with a visit with the lady’s hot-headed granddaughter who makes it clear she doesn’t trust him, but still helps him get a job at the garage where her brother worked. Another pretty young woman, a sister of one of the victim’s pit crew buddies takes an interest in Dallas. Soon he has a long list of suspects and is in over his head. He visits the real PI who turns out to be an elderly man with serious health problems who is delighted to have an apprentice fall into his lap. To be certain he’s being honest and aboveboard, he contacts the police in the small town where the victim was shot during a demolition-derby race and has the good fortune of working with a detective who doesn’t mind sharing the case. However, someone cares a great deal about Dallas’s involvement and makes several attempts on his life and the lives of those he’s trying to help.

Poulson has created an interesting cast of characters. Dallas doesn’t change a great deal from the beginning to the end of the story other than to regain the confidence he once had as a soldier and to give some serious attention to the religious faith he had let slip. The two ladies who play significant roles don’t change much either, but their roles are interesting, both suspects and romantic interests. This much loved author has a folksy, rural style that gives his characters a kind of authenticity; they’re the people you meet when you take your car to have the oil checked, the kind of people you meet at church, in the grocery store, and who live across the street.

This fast-paced novel follows Poulson’s usual trademark style of plenty of action. There was one point where I felt a little cheated. It was when Dallas received information which was blatantly withheld from the reader. Other than that one incident that added a hint of deus ex machina to the ending this was a satisfying suspenseful mystery.

Poulson spent twenty years in law enforcement beginning with the US Army Military Police, then the Utah Highway Patrol, and finally as a deputy then sheriff of Duchesne County. He currently serves as a justice court judge for Duchesne County. He has served on many state and federal law enforcement committees and boards. He and his wife have five children and twenty-three grandchildren. In addition to his court responsibilities he assists his oldest son with operating their grocery store and works with him and other family members on the family ranch.