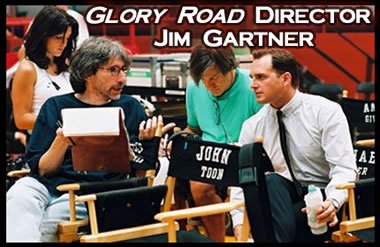 Everybody in film dreams of the opportunity to be a director, especially of a movie with some significance. They work for it, hope for it, scramble for the chance. But not Jim Gartner, director of Glory Road, which opened last weekend to a first-place box office finish at $16.93 million.

Glory Road is the story of Texas Western’s 1966 NCAA victory, where a crusty, audacious Coach Don Haskins fielded an all-black starting line-up in a sport that had never seen that before. Not only did this change the face of college basketball, but did more to advance social justice and racial equality than any civil rights march ever did. 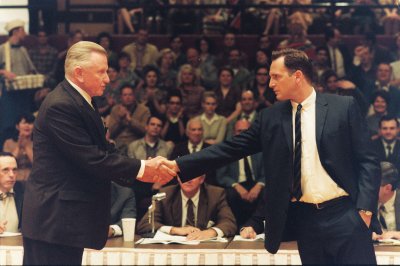 They were playing the heavily-favored University of Kentucky squad coached by the legendary Adolph Rupp.  What makes this game so significant was the courage of Don Haskins as he ignored insults, threats and glares to send five black players onto the floor.

Don Haskins said that he didn’t intend to make a political or cultural statement that night, but he made a choice based on ability and heart. 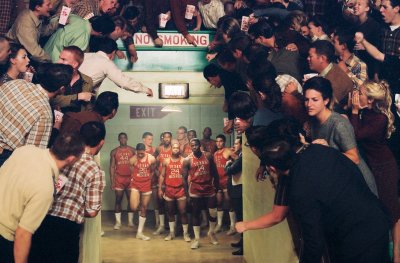 Jim Gartner was a perfect choice to direct a movie based on heart – and the spontaneous applause that has broken out in some theaters at the end of the movie indicates people have been touched.

I remember Jim well from his 14 years at Bonneville Communications, where he was one of the early directors and writers of the Church’s Homefront spots.  The spots, which highlight poignant and warm teaching moments about marriage and family, were always so outstanding they brought in shelves full of awards.  Bonneville’s directors had Emmys and Clios (awarded for top advertising spots of the year) so thickly crowded in their offices, they hardly had room to work. 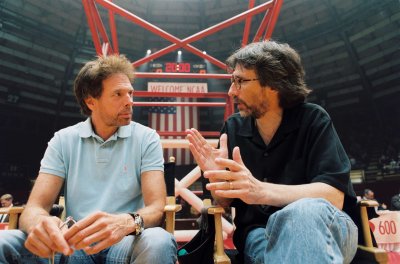 The atmosphere at Bonneville was so creative, you could feel it as you walked in the office, a tangibility in the air.  “It was magic,” said Jim. “I suppose everybody has their own glory days, but those were my glory days.  They were really special times. We were so known in the advertising industry that people really looked at us in a special way.”

I recall thinking even then, that the magic particularly spun around Jim. He was something special, putting more in 60 seconds of a television spot about the significance of family than you could say in an hour. 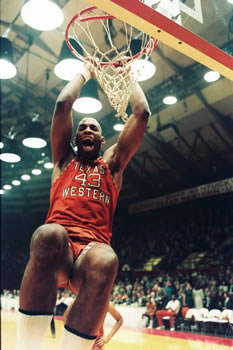 He once did a Homefront spot called “Julie Through the Glass.”  It portrayed parents looking through the glass into the hospital nursery at their beautiful baby girl.  Then as the music plays, “Julie through the glass, I’m looking forward to spending time with you.” the image segues through many scenes of her growing up.  She is a toddler, a child ballerina, a graduate in loving scenes with her parents.  This flashes before their eyes and they look once more at their baby through the glass with an added sense of how fleeting their time will be together – and how precious every moment is.

So that Jim Gartner became the director of a major motion picture does not surprise me, but it wasn’t his driving ambition.

“What’s odd about me,” he said, “is this was never anything that I pursued. It sort of came my way.  I always took what I did seriously. I am fanatical that way and I am not always successful, but I attempt to learn whatever the craft is that I’m currently engaged in and I’m rather obsessive about it.”

What I admired and remembered all these years about Jim was that after every day of film shooting on the Homefront spots, he took careful notes in his notebook about what he could do to improve, what mistakes he had made, what might make things work more smoothly.  He became a director of a major motion picture because one event in his life just sort of unfolded into the next as a natural consequence of this pursuit of excellence.

“I think most of my notes were on my mistakes and where I thought I was stupid, so that I wouldn’t do the same thing a second time.  This involved everything from the mechanics of filming to ones posture as a director.  It’s nice to have a starting place the next time around so you don’t have to reinvent the wheel.”

He laughed, “Some mistakes are difficult to overcome so you just keep them on the list.  It’s a long life.  It’s probably a smart thing to do just in terms of moving ahead in life.

In fact, he comments on the awards that he used to have.  “They end up meaning nothing.  What remains is the magic of the experience. Back then, they were kind of meaningful because we were young and egotistical.  We’re not young anymore, even though we may still be egotistical.  Things only seem to matter more in the moment than they do looking back.  That’s true of bad things, too.  You wonder later, why did that affect me so much?”

When he loved working on Church commercials so much, why did he ever leave?

Don Block saw something remarkable in his work, called from Los Angeles and said, “We’d love to represent you.”  Jim said that he didn’t want to leave.  “I loved what I was doing and that was the huge payment.”  He said, “Tell me every concern that you have.”

Jim said that he didn’t want to leave Salt Lake.  “We’ll just fly you in,” was the answer.  “I don’t want to do alcohol, tobacco, coffee or tea ads.”  No problem.  “I’m pretty choosy about what I work on, and I’ll probably turn down a lot of opportunities.”  Again the answer was no problem.

Jim began directing many of the television commercials of the big time clients – Pepsi, American Express, Federal Express, AT & T, Coca Cola, and the Morgan Stanley ads where the financial advisor is cheering for the family member at some special event like graduation – and the twist is that only after a few seconds do you realize he’s not the father or a close family member.

While he worked on these plum jobs, he lived in Michigan – away from any glitz or glamour. “You try to anchor yourself in reality,” he said.  My persona is really un-director like.  I’m kind of quiet.  I’m not one of those guys who is loud with a dominant personality.  So I go against type a bit.”

Commercials are particularly attractive for a director, however, because more money per celluloid second is invested here than in the television shows they sponsor.  It’s not uncommon for a 60-second spot to cost a million dollars.

Still, there’s only a handful of directors who make the jump from commercials to full-length films.  But producer Jerry Bruckheimer saw Jim’s work and offered him the opportunity.

“I certainly liked the script.  I was drawn to it,” said Jim.  “I had turned a lot of movies down because I wasn’t drawn to them.  I had made a career doing commercials with humor and emotion, and this script had that.  I knew this would be a good place for me to start because I’d be in somewhat of a comfort zone.”

But Jim admits, it also took a swath of time from his life.  In March, it will have been two years since he first started talking about doing the film.  This time, he says, his notebook was particularly full.  “It was the most difficult thing I’ve ever experienced and brought a range of joys and sorrows.”

Again, he pushed himself hard for excellence.  “I’m quite hard on myself that way.”  But in making a film, there’s a lot of opinions.  It’s not just me crafting the story.  You have to make sure you are all making the same movie.”

The highs were marvelous and the premiere was unforgettable. “It was a big audience,” Jim said, “and they went crazy over the movie because most of them are associated with the historical events. The real players from the team came out onto the stage, and it was very, very emotional and the whole audience got to their feet.  It was a magnificent moment.

“Haskins called me yesterday, and said that as he walked out of the theater, there was an old black man just weeping because he remembers so well when they didn’t have the same opportunities.”

Jim also loved working on the footage that runs over the credits.  He interviewed the original players who talked about their experience.  “It makes the story richer and it hits home more solidly when you see the real people who were involved.”

So does Jim have a string of directing opportunities all lined up?  “It’s too early to say, if I will choose to do another picture,” he said.  What’s certain is that this Michigan boy will continue to keep his notebook and stay grounded in what really matters.  It is that grounding that gives his work so much heart.