Missionary Moment: Missionaries Everywhere are Servants of the Lord

Our son-in-law, Joe Dominguez, has been a Military Construction principal for an international construction firm building military facilities in remote areas of Iraq and Afghanistan for the past 3 years. On all of the military bases where he has worked, Joe has been able to find the LDS Group to meet with on a regular basis. Joe is always meeting soldiers and civilian workers during his daily activities and it is not unnatural for him to meet and befriend many people or to simply say hello in passing.

Working in the Middle East in Muslim countries contractors are counseled to avoid spreading Christianity to the locals and to keep their Christian believes to themselves. This has been difficult for Joe; however, he always finds quiet ways to share his testimony often with his American co-workers, military personnel, and even with locals who asks why he is so different from the others.

Without being overbearing and in appropriate times most people that interact with Joe learn that he is a member of The Church of Jesus Christ of Latter-day Saints who lives his religion. Many of Joe’s fellow workers simply think Joe is an outgoing, respectful, non-swearing, construction supervisor who is demanding and enjoys meeting people.

Recently, Joe along with an entire construction crew was transferred from Afghanistan to Central Africa on a temporary work assignment. 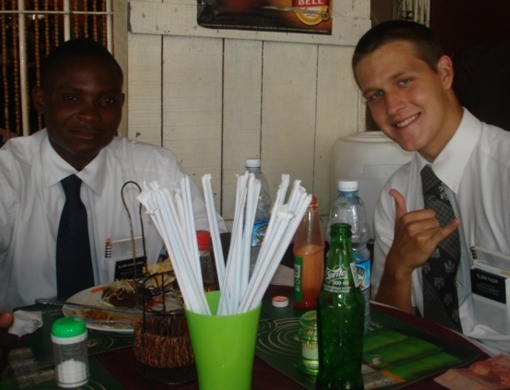 Joe responded: “There are approximately 55,000 LDS missionaries serving throughout the world. In the early 1990’s, I was an LDS missionary serving East Los Angeles, California. I feel like I know every missionary I see and when I see them anywhere, I always say hello, shake their hands and wish them well because they are servants of the Lord!” 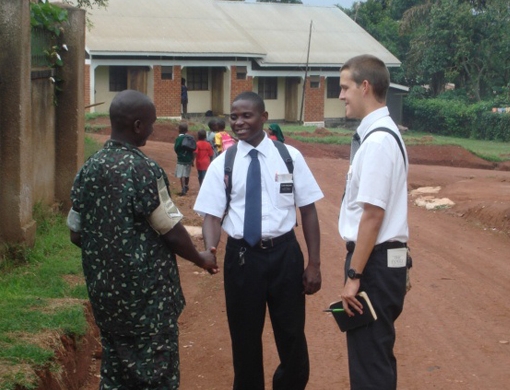 A few days later Joe was able to locate the local LDS Church building in Entebbe, Uganda Africa where he met the missionaries again and photographed them as they were engaged in their daily work there.  Joe is currently enjoying meeting with the saints in Entebbe during his temporary construction assignment there.  The attached photo he took in Uganda  is of Elder Facer from Pasadena California, and  Elder Kabelenga from Zambia Africa.