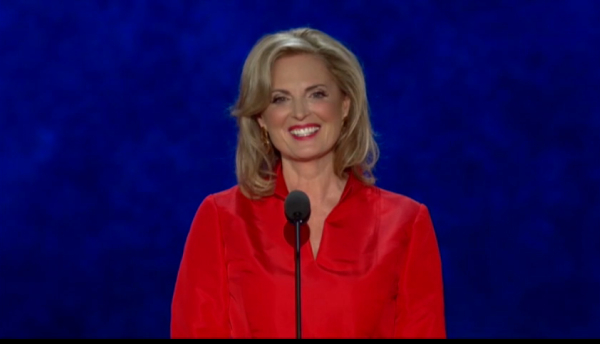 Ann Romney admitted she was feeling just a big shaky during the sound check before her speech at the Republican Convention, but she went on with brightness and confidence to move and inspire the crowd who gave her a standing ovation.

Since this was the first time she had used a teleprompter to give a speech, Mitt gave her some advice. “He said to just look as though someone’s face is there as though you are talking to someone, and that helped a lot,” she said.

The much-anticipated speech was slated to be window into the human side of Mitt Romney, revealing the man behind the candidate. He wanted her front and center at the convention as she is so much of what defines him.

Wearing a patriotic red dress, Ann, who usually does not use a script when she talks, delivered a heartfelt speech that she had written herself. Her words demonstrated why this woman whom Mitt fell in love with when she was only 16 is his best campaigner and most trusted advisor.

Some have written that he looks best when she is with him and he is the only governor of Massachusetts to have insisted that his wife be portrayed with him in the official governor’s portrait.

In the political world that is so often rancorous, her topic was surprising.

She had told ABC’s Diane Sawyer before her speech that Mitt’s attaining the presidential nomination wasn’t so much a sense of jubilation as something else. “It’s a settling in of the awesomeness of how many people are counting on us,” she said. “What I’m feeling and what I think is what Mitt is feeling as well… sort of a humility that is millions of people have put their trust in us and we don’t want to disappoint.”

Those who have tried to make the election about class warfare attempt to paint Ann Romney as an out-of-touch Republican country-club elitist, a rich girl who can’t understand the needs of others, but she painted quite a different picture in her speech.

“I want us to think tonight about the love we all share for those Americans, our brothers and sisters, who are going through difficult times, whose days are never easy, nights are always long, and whose work never seems done…

“The parents who lie awake at night side by side, wondering how they’ll be able to pay the mortgage or make the rent; the single dad who’s working extra hours tonight, so that his kids can buy some new clothes to go back to school, can take a school trip or play a sport, so his kids can feel like the other kids.

“And the working moms who love their jobs but would like to work just a little less to spend more time with the kids, but that’s just out of the question with this economy. Or that couple who would like to have another child, but wonder how will they afford it.

Then she made a special appeal to women. “You know what it’s like to work a little harder during the day to earn the respect you deserve at work and then come home to help with that book report which just has to be done. You know what those late night phone calls with an elderly parent are like and the long weekend drives just to see how they’re doing. You know the fastest route to the local emergency room and which doctors actually answer the phone when you call at night.

“You know what it’s like to sit in that graduation ceremony and wonder how it was that so many long days turned into years that went by so quickly.

She spoke of $60 tabs at the gas station, grocery bills that soar and said, “We’re too smart to know there aren’t easy answers. But we’re not dumb enough to accept that there aren’t better answers.”

This is not a world that Ann cannot understand. She is the granddaughter of a Welsh coal miner who was determined that his kids would get out of the mines and escape poverty. Her father got his first job at 6 and immigrated to America at 15. Her future father-in-law George Romney did not graduate from college, but instead became a carpenter, then with hard work became the head of car manufacturer and finally governor of Michigan.

She married Mitt when was 19, because they were deeply in love. They became engaged on the way home from the airport when he was returning from his mission.

She said, “There were many reasons to delay marriage, and you know? We just didn’t care. We got married and moved into a basement apartment. We walked to class together, shared the housekeeping, and ate a lot of pasta and tuna fish. Our desk was a door propped up on sawhorses. Our dining room table was a fold-down ironing board in the kitchen.”

Ann said, “I read somewhere that Mitt and I have a “storybook marriage.

” Well, in the storybooks I read, there were never long, long, rainy winter afternoons in a house with five boys screaming at once. And those storybooks never seemed to have chapters called MS or breast cancer.


“A storybook marriage? No, not at all. What Mitt Romney and I have is a real marriage.”

Earlier Ann Romney has said that her quiet battle with MS-and later breast cancer-helps her understand the struggles of ordinary Americans. “We all have our challenges in life, and for me, it has been my health,” she said. “I like to say that we all carry our own bag of rocks. It may not be visible to the rest of the world, but it is there.”

Ann first felt the symptoms of MS at Thanksgiving in 1998 with a numbness on her right side, then more difficultly getting upstairs. When they went to the doctor for tests, it was clear she was flunking the examination and something was terribly wrong.

By 1999 the prospects of being nearly bedridden and spending her life in a wheelchair loomed before her. She told one audience, “I was at such a scared time in my life. The only way I can describe it – do you know when you have the flu and you just can’t get out of bed? That’s how I felt all the time … That’s what I was living with, in addition to my right leg, my whole right side, basically not working.”

That’s when Mitt said to her what she needed to hear. “He said to me, I don’t care how sick you are. I don’t care if you’re in a wheelchair. I don’t care if I never eat another dinner in my life. I can eat cereal and toast and be just fine. As long as we’re together, everything will be O.K.’ I needed that at that moment.” In this instant, the turn-around candidate, did the same job for his wife.

In her speech she described him giving the same service to others, “He has tried to live his life with a set of values centered on family, faith, and love of one’s fellow man. From the time we were first married, I’ve seen him spend countless hours helping others. I’ve seen him drop everything to help a friend in trouble, and been there when late-night calls of panic came from a member of our church whose child had been taken to the hospital.” 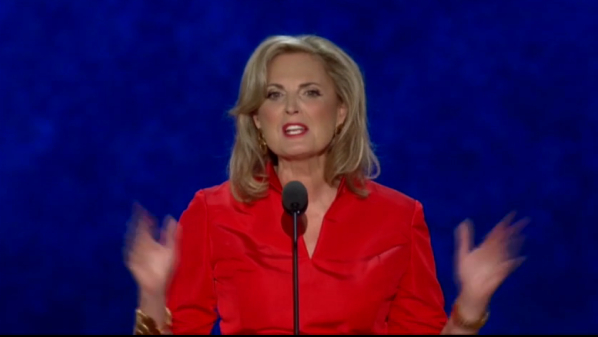 She said, “You may not agree with Mitt’s positions on issues or is politics…But let me say this to every American who is thinking about who should be our next president:

“No one will work harder. No one will care more. No one will move heaven and earth like Mitt Romney to make this country a better place to live!”

She said that it is true that Mitt has been successful at each new challenge he has taken on, but “It amazes me to see his history of success actually being attacked. Are those really the values that made our country great? As a mom of five boys, do we want to raise our children to be afraid of success? Do we send our children out in the world with the advice, “Try to do…okay?”

“And let’s be honest. If the last four years had been more successful, do we really think there would be this attack on Mitt Romney’s success?”

She said that Mitt would be the first to say that he had been the most fortunate of men because he had two loving parents “who gave him strong values and taught him the value of work.” He was well-educated, but “as his partner on this amazing journey, I can tell you Mitt Romney was not handed success.

She remembers long hours, risk-taking, times when they wondered if the whole idea just wasn’t going to work. “Mitt’s reaction was to work harder and press on.” The small company he grew has helped many others to live better lives-and this is the very essence of the American dream.

She said, “Because this is America, that small company which grew has helped so many others lead better lives. The jobs that grew from the risks they took have become college educations, first homes. That success has helped fund scholarships, pensions, and retirement funds. This is the genius of America: dreams fulfilled help others launch new dreams.

“At every turn in his life, this man I met at a high school dance, has helped lift up others. He did it with the Olympics, when many wanted to give up.

“He did it in Massachusetts, where he guided a state from economic crisis to unemployment of just 4.7%…

“This is the man America needs.

“I can’t tell you what will happen over the next four years. But I can only stand here tonight, as a wife, a mother, a grandmother, an American, and make you this solemn commitment:

“This man will not fail.

“This man will not let us down.

“This man will lift up America!”

“You can trust Mitt.

She played to the heart and delivered.