The Olympics Pique an Interest in Sports Books | Meridian Magazine

The Olympics Pique an Interest in Sports Books

The 2012 London Summer Olympics garners high interest in sports here in America. Following an amazing book that introduces readers to London, there are several more books about the Olympics and several sports that kids will genuinely enjoy. 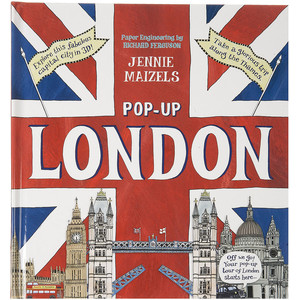 Pop-Up London (Full of Flaps, Facts, and Dramatic Pop-Ups), by Jennie Maizels, and engineered by Richard Ferguson, is the perfect sight-seeing book of this host city of the 2012 Olympics. You begin by floating down the Thames and pass by the most spectacular pop-ups which include Westminster Abbey and the Tower Bridge. The interesting facts found throughout the book are easy to read and some are found under flaps. What a great way to tour this city! This book is perfect for all ages.

Dream Big (Michael Jordan and the Pursuit of Olympic Gold), by Deloris Jordan, and illustrated by Barry Root, is a picture book for all ages that both inspires and educates all who read it. Michael Jordan first got the desire, back when he was nine years old, to play on the U. S. Olympic team after they narrowly lost to Russia back in 1972. This story, richly painted with watercolors and gouache, showcases the tiny steps it took Jordan as he grew, but continually worked hard, to achieve his goal. 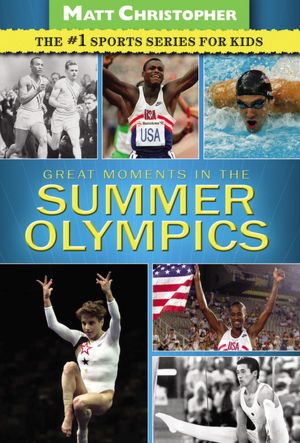 Great Moments in the Summer Olympics, by Matt Christopher, is a non-fiction that will take you back to some of the most amazing moments in these Olympics that will be as inspiring today as when they happened. Some of these stories include Jesse Owens, Carl Lewis, Wilma Rudolph and Michael Phelps. The best part of this book is the author, who will keep your 8 year old and older reading to the very end!

Unexpected Twist, by Olympic Gold Medalists Dominique Moceanu and Alicia Thompson, is a story about the heart of gymnastics and the triumph and heartache that goes with it. Christina has been working her whole youthful life to get to the point of winning, but then disaster happens when she lands her vault and painfully injures her ankle. This is one of four books in a planned series about gymnastics that are good for ages nine and older. 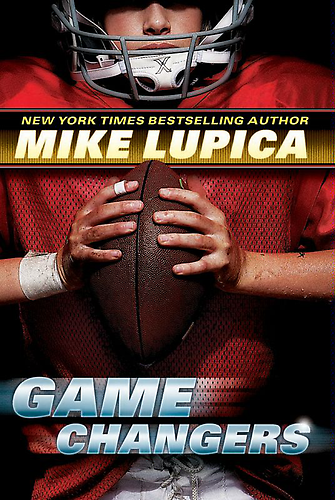 Game Changers, by one of my favorite sports authors, Mike Lupica, is engaging from the first page and will likely keep ages nine through adult turning the pages to the end. Ben is very capable of playing just about any position on his football team. But what he really wants is the quarterback position. But the coach’s son, Shawn, has that spot. What happens when Ben gets to know Shawn better and discovers Shawn’s inner struggles, he finds compassion to help.

Good Sports: Able To Play, by Glenn Stout, features four stories about talented baseball players who dealt with major physical disabilities. Mordecan Brown lost a finger, Jim Abbot was born with one arm, Ron Santo had sever diabetes and Curtis Pride had major hearing loss. Now if these stories don’t inspire you, I don’t know what will! This book is great for all ages.

Ballpark Mysteries: The Astro Outlaw, by David A. Kelly, and illustrated with drawings sprinkled throughout by Mark Meyers, is a chapter book series good for ages seven to nine. Each mystery takes place at a different ballpark. This story takes place in Houston and Mike and Kate soon discover that a rare moon rock that was being shown at the Astro ballpark has suddenly gone missing. 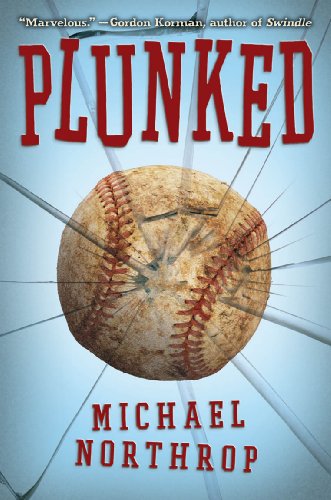 Plunked, by Michael Northrop, is a fabulous read that’s not just about the intricacies of baseball, but the timid and even skittish trepidation of that hard ball as it comes fast towards your face. When Jack gets hit in the head by a wild pitch, he finds himself scared of the ball. There is so much to learn, understand and appreciate in this well-written story. This book is good for ages nine and above.

How Georgie Radbourn Saved Baseball, by David Shannon, was first published back in 1994 and won the picture book New York Times Best Illustrated Book of the Year. This reissue showcases the wonderful full page illustrations and tells about a boy who overcomes a corrupt ruler who proclaims that no baseball is allowed in the country.

Randy Riley’s Really Big Hit, by Chris Van Dusen, is a home-run from the start. This picture book, with illustrations that have the flair and feel of the mid-20th century, is about a nerdy, science-loving boy who just can’t seem to be any good at baseball. Then he builds a giant robot to save his town from an astroid. 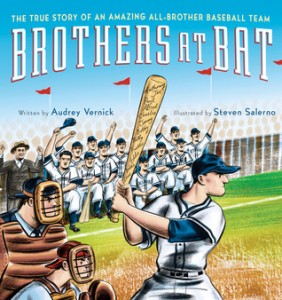 Brothers at Bat (The True Story of an Amazing All-Brother Baseball Team), by Audrey Vernick, and painted with black crayon, gouache, watercolor and pastel by Stven Salerno, is a picture book about a family of 16 children back in the 1930’s. This family had enough sons to play and still have three on the bench!

Super-Sized Slugger, by Cal Ripken, Jr. and with Kevin Cowherd, is a story about Cody who is the new kid in school and he’s overweight. (He prefers to call himself burley.) The story shows how he overcomes teasing and being friendless with his great ability to play ball. 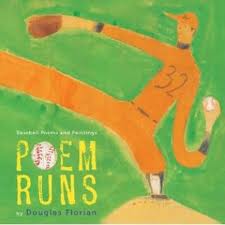 Poem Runs, (Baseball Poems and Paintings), by one of my favorite kid’s poets: Douglas Florian, has simplistic, yet realistic, poems from the first pitch to diamond positions. The winning illustrations (a combination of many elements) are cleverly done in Florian’s style.

There Goes Ted Williams: The Greatest Hitter Who Ever Lived, by Matt Tavares, is a beautifully painted picture book about this tremendous hitter for the Red Sox when he hit .406 in 1941. The story also tells of his continual hard work practicing daily as a kid because he wanted to hit the baseball better than anyone else. This book showcases diligence, sacrifice and aspiring and achieving goals.