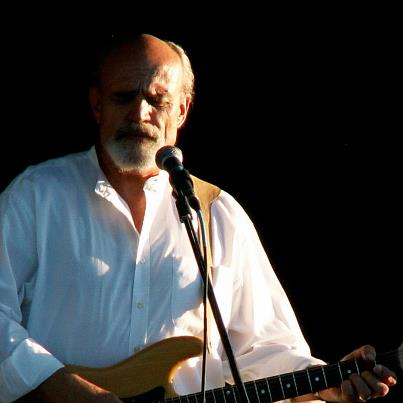 I’ve been picking and grinning at Capt. Len’s City BBQ (just south of the roundabout in Alpine, that one town in Utah).My job is to be sort of an organic jukebox.

(“Juke,” in case you’ve been wondering, is a Gullah word meaning “disorderly,” and was used in the 1930s as a synonym for “roadhouse” or “tavern.”) 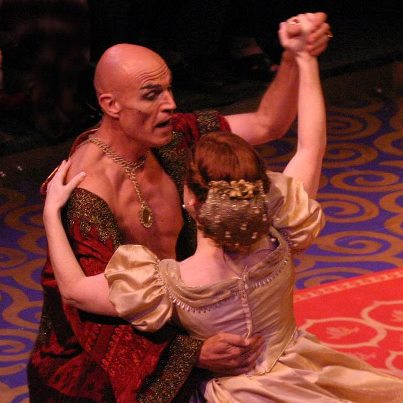 [You can see a half-dozen more of these Great Moments in American Advertising at www.facebook.com/mpayneplayer ]

I was an organic jukebox (O.J.) once before, in the Tree Room at Sundance (that one ski resort in Utah). Tricia Storey, who had done that job with grace and sensitivity for several years, got kicked upstairs to being the hostess and she asked me to fill the gap. But that was back when I thought I was more important than I do now. Every night it rankled me (“rankle” is a word that through various inexplicable French permutations comes from the Latin “draco,” meaning “serpent.” Hey, Mr. and Mrs. Malfoy, I get it now!)that people weren’t dropping their forks in astonishment at the poignancy (first I typed “pignancy” and that was kind of funny) of my songs, and letting their forty-dollar grilled trout with the head still attached get cold. Finally, I’d had enough and wrote and sang this song to a slightly puzzled clientele and got the heck out.

I won’t be a jukebox anymore.

No I won’t be a jukebox anymore.

So please, Mr. Redford, won’t you show me the door?

Cause I won’t be a jukebox anymore.

There were several other verses about the regrets I would feel in leaving, like not seeing the lovely hostess nightly and not eating any more of Lex’s fish (Lex was the chef) but I can’t remember those verses.

The lyrical form is natural and easy, and must reflect an immediate human crisis. I’ll write one now.

I got up this mornin’ (which is where many blues songs start, with the apparent assumption that nothing much happens to you until you at least get up), felt a hunger in my head.

I got up this morning’, felt a hunger in my head.

Couldn’t find my MacBook, so I went right back to bed.

(In fact, this is untrue (some blues songs are untrue). I’d gone to sleep with the MacBook right beside me, listening to “Aunts Aren’t Gentlemen” by P.G. Wodehouse.)

Got my MacBook right beside me, gotta write Backstage Graffiti today.

Got my MacBook right beside me, gotta write Backstage Graffiti today.

Got no clues what they can use. I got the blues-I’ll get some help from my valet.

So I left the Tree Room a couple decades ago with the blues, and now I return to being an organic jukebox at a blues joint. You see, the good Captain himself is a blues musician and plays there with his band every now and then. There are pictures of blues musicians in frames on the wall, and blues playing over the muzak system when there’s no O.J. (that’s shorthand for Organic Jukebox, in case you forgot already) on the stage.

But I don’t do blues very well. I mean, I know some of the licks, but I don’t have the ego for it. You have to have an ego before you can get your egobruised by a false lover, or an inattentive audience,and feel the real need to get the blues out of you. (This ego reduction is why I can blissfully be an O.J. now-I just love to play guitar and sometimes people even listen.)This sort of gets at the meaning and purpose of the blues. We young suburban guitar owners in Southern Californiasang blues songs to workourselves into feeling really low, thinking that the lower we felt, the more honest our singing would be. We didn’t know that the blues exist as a means to escape and transcend the low feelings that life lays on us-I mean lower feelings than those induced by acne.

Neil Diamond, in a song that was like the blues in about the same way that golf clubs are like popsicles, said it pretty well when he sang something about how you take your blue feelings and put them in a song “and sing em out again” (which is the only part I remember). Watch young white guys when they sing the blues. They’re usually frowning. Watch old black guys when they sing the blues. They’re almost always smiling.

I also don’t have a proper blues name. About a year ago, Blind Lemon Jefferson, Bald James Taylor, and Disingenuous B.B. King made an appearance in Backstage Graffiti. The first of these is the only artist with an authentic blues name. You have to start with a disability, then move on to a fruit (lemons and watermelons being featured prominently), then your last name, or, better, the last name of the aristocrats who owned your ancestors, or, even better, the last name of an early U.S. President. I just can’t get much mileage out of “Moderately Depressed Mango Taft.”

And this name thing is important. Some time ago my eyes rested upon something on the Internetthat instantly whapped me with the truth. “Persons with names like Sierra, Sequoia, Auburn, and Rainbow can’t sing the Blues no matter how many men they shoot in Memphis.”

But to please the Captain, I always sing “Down in the Dumpster Blues,” which I wrote for the musical “Take the Mountain Down.” (I don’t remember if my co-author Steven Kapp Perry deserves any of the blame for this particular song.)

He also likes it when I sing “Abilene,” which isn’t exactly a blues song but sure sounds like one. Neither is it a folk song, but in the spirit of the “folk process” (although possibly in violation of the spirit and letter of the “copyright process”) I made it my own. I’d flown in an itty-bitty jet down to St. George to play a set in their “First Night” revels several years ago.

I had with me a black Gibson hollow-body electric guitar and was feeling funky. The chord progression to “Abilene” is completely fun to play and, on a whim, (no, really it was on a black Gibson hollow-body electric guitar) I played it in my set. But I only knew the chorus and one verse. So first I had to write a few more verses.


My new verses were nearly dictated by the spirit of the few words I knew, which were:

Women there don’t treat you mean in Abilene, my Abilene.

Wish to the Lord that I could be in Abilene, my Abilene.

So what’s it about? A place where people are nice and things are free. What did that remind me of? I got to work.

Wish to the Lord that I could be in Abilene, my Abilene.

All the little children, like you and like me, lookin’ for heaven in the top of the tree.

I’m gonna climb til I can see Abilene, my Abilene.

Gates of pearl, streets of gold-there’s a light in the night, so I’ve been told.

So hang on tight, I’m gonna hit the road for Abilene, my Abilene.

Been gone so long I’m losin’ track of the facts.

Is it a city on the plain, or is it Zion by the tracks?

Well, if it ain’t I just might have to settle for a reasonable facsimile-

I don’t remember ever having been advised to “liken the blues” unto us, but there you are. Couldn’t help it.

Anyway, it’s been fun at Capt. Len’s. So far, there’s been only one documented case (I mean, with witnesses) of someone retreating to the parking lot because their ears were actually hurting.

Last Tuesday when I got there I didn’t feel much like singing, though, because earlier in the day the mountain range that rises from the eastern edge of town went up in flames. Imagining that the fire was caused by the use of banned fireworks, I was preparing myself emotionally to be irritated. (Turned out to have been started by a backhoe that was breathing fire into… no, backhoes don’t do that-it was started by a backhoe that backfired flames into… no, I don’t think backhoes do that, either-it was started by a backhoe that gave a look of fiery indignation at… no. Maybe the sun focused in a funny way through the irregular pane of the backhoe window onto the dry… well, a backhoe seems to have been involved.) Still, I picked and grinned, valiantly.

By the next night, you could watch (and hear!) stands of pine explode into flames that reached over a hundred feet into the sky. 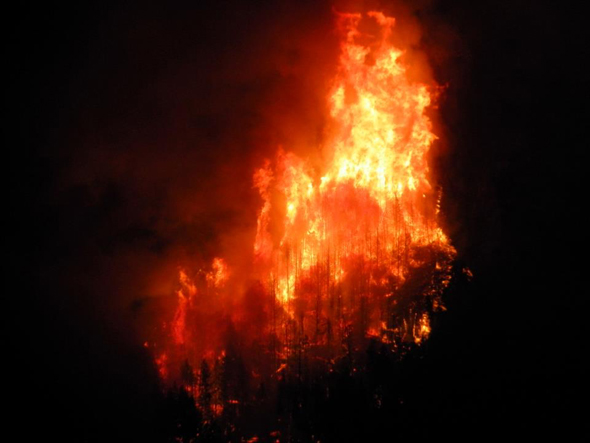 The firefighters were splendid, and the town pulled together pretty unselfishly. I mean, like, nobody sold tickets to outsiders to watch it, and stuff. Still, I felt a little like that fiddling Emperor Nero Tuesday night on the stage of Capt. Len’s, except I didn’t start the fire. 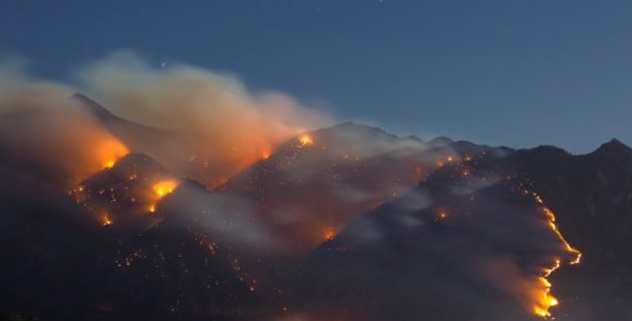 Five days later, I felt more like making music than ever before. My wife had been asked to sing “Jesus, the Very Thought of Thee” in sacrament meeting and I played piano for her. Why the difference in my desire?

During the fire, we watched helicopters make flight after flight in constant rotation to drop loads of water onto the advancing line of flame. It was valiant, and I’m sure to a degree effective. But the fire marched ahead, hungry for pine.

Then we awoke to rain. I don’t think about rain much, really. Doesn’t usually seem like a big deal. Until you compare its effectiveness to that of helicopters. I suddenly wondered how many helicopters it would take to blanket that vast mountain in water all at once? It was a mercy.Double rainbows that night. 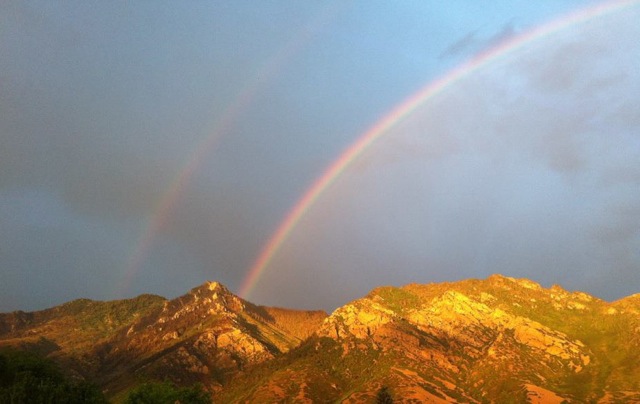 “Abilene” has urged metaphor upon us here in this column. On the day after the fire was pretty much fully contained, I was out watering our little garden-furrows meandering this way and that (I never plow straight rows). It was the usual challenge: how to get the water to the end of the row. Someplace in General Conference, or in a rumor following an official training, or someplace in my imagination, I remember hearing that the Brethren, masters of metaphor, were always concerned about “getting the water to the end of the row,” meaning “getting the gospel to the last tender soul in line.” And I remember one of them saying to the rest of them that the answer was probably to pray for rain.

So Laurie stood up in church and sang the blues. She never shot a man in Memphis, but after suffering a week of flame and sirens and heartbreak and worry and redemption, she was qualified to drop sweet music onto our loved ones like rain. Everybody listened.