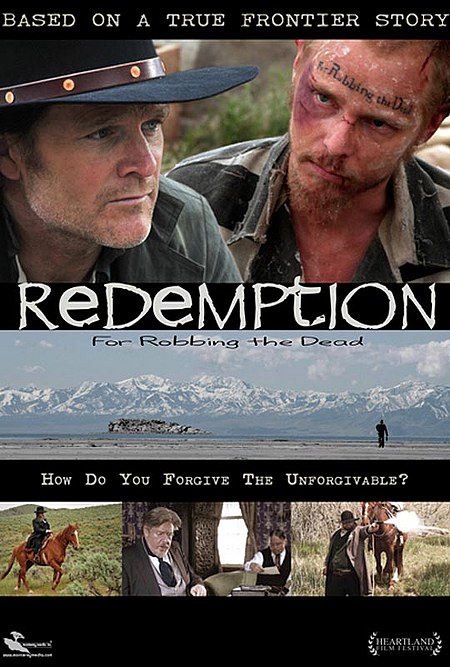 Like Saints and Soldiers before it, Redemption (now on DVD) is a gritty and realistic offering from Mormon Cinema that carries broad appeal. A hit at both the Heartland Film Festival and the LDS Film Festival, Redemption should appeal to anyone who believes in the principles of mercy and compassion. Set in the Utah Territory in the 1860’s, the film (also known as For Robbing the Dead) is a compelling true story about an impoverished immigrant-turned grave-robber who’s exiled and left for dead on a barren island in the Great Salt Lake as punishment for his crimes. The bitter sheriff who arrested him takes pity on him, bringing him food and water, to the disgust of the still-grieving community. Striking up a slow-building friendship, the two men help one another to take responsibility for their past mistakes and allow God into their hearts. As a nice bonus, there’s a brief cameo by Porter Rockwell, doing what he did best.

Produced by Firstlight Independent and released through Covenant Communications, Redemption undoubtedly had a small budget, but one would never know it from the artistry on display. Derek Pueblo’s cinematography is excellent: notice the gradual “warming” of the colors and tones as the characters approach redemption. Writer/director Thomas Russell has crafted a nicely understated work here; nothing is melodramatic or forced, and the realism pays off nicely. Never preachy or overbearing, some of Redemption‘s most poignant messages emerge only upon post-viewing reflection. The attention to period detail in wardrobe, set design, and dialogue is impressive, and the performances are superb all around, from relative unknowns John Freeman, David Stevens, and Robyn Adamson in the leads to the well-known faces in the supporting cast like Margot Kidder (Superman), John Gries (Napolean Dynamite), and Edward Herrmann (The Aviator, Richie Rich).

The only real flaw of the film is that some of the dialogue is difficult to hear or understand; I found myself rewinding and replaying a few moments to catch what I missed. No matter, this is a faith-promoting, virtuous film. It’s made all the more so, in my opinion, because it doesn’t sugarcoat the imperfections of people or the harsh realities of life, which gives its morality greater weight. It’s worth noting that the deleted scenes are worth the watch; though they would have slowed the story down, they provide some nice insight into the Mormon-led history of Utah at the time.

CONTENT OVERVIEW: Redemption is rated PG. It has some non-bloody gun violence, some threatening scenes with implications of beatings, brandings, and cutting off part of a man’s ears (the scenes end before the actual violence occurs, but the aftermath is shown). A man cauterizes his ear to prevent it from infecting. A woman talks about a man making “advances” to her, but the dialogue is handled tastefully and is relevant to the plot.

MESSAGES TO DISCUSS: “Love your enemies, bless them that curse you, do good to them that hate you, and pray for them which despitefully use you and persecute you” (Matthew 5:44). The body and spirit separate at death, but are restored in the resurrection because of Christ (2 Nephi 9:10-12). Those who show mercy to others will receive mercy from God (Matthew 5:7 as well as this General Conference talk by Gordon B. Hinckley). “Who am I to judge another, when I walk imperfectly? In the quiet heart is hidden sorrow that the eye can’t see. I would be my brother’s keeper, I would learn the healer’s art. To the wounded and the weary, I would show a gentle heart. I would be my brother’s keeper; Lord, I would follow thee” (Hymns #220).

FOR MORE REVIEWS, ARTICLES, AND VIDEOS FROM THIS AUTHOR, PLEASE VISIT https://www.mormonmovieguy.com