Sports Illustrated Cover Features the Faith of an LDS Athlete

The cover of this week’s Sports Illustrated features an intense picture of an outstanding high school athlete with this headline: Jabari Parker Is…The Best High School Basketball Player Since Lebron James, But There’s Something More Important To Him Than Instant NBA Stardom: His Faith. 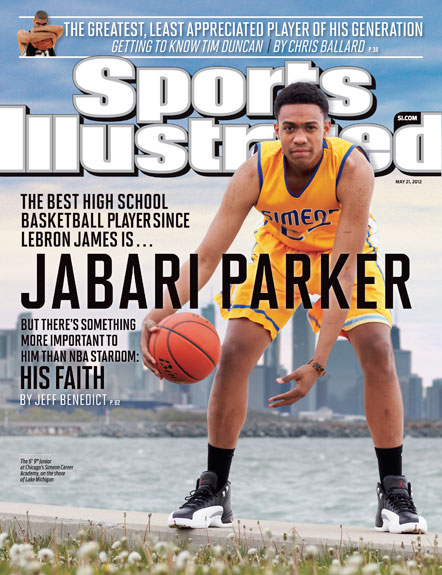 The magazine rarely features a high school athlete, and even more rarely highlights his faith, but this article, written by Jeff Benedict, LDS author and frequent SI contributor highlights his outstanding prowess on the court as the reigning National High School Player of the Year and his loyalty to the LDS Church.

According to Sports Illustrated, “Last season the 6’9″, 220-pound junior led Simeon to a 33–1 record and a third straight Class 4A state championship. In April he was chosen the Gatorade National Player of the Year, becoming only the fourth nonsenior to win the award (after James, Greg Oden and Brandon Knight). Three months earlier USA Basketball had named Jabari its male athlete of the year for 2011, succeeding 2010 winner Kevin Durant, an NBA All-Star. Jabari got that nod after leading the U.S. to the gold medal and being named MVP of the FIBA Americas U16 championship in Cancn, Mexico, last summer.”

In other words, he’s good-real good. But that goodness is also soul deep.

When SI describes his backpack it includes the usual paraphernalia of an athlete-T-shirts, Icy Hot gel, a couple of rolls of athletic prewrap and “also a paperback copy of The Book of Mormon. Jabari belongs to the Church of Jesus Christ of Latter-Day Saints. Basketball is what I do,’ he says. It’s not who I am.’

Jabari’s father, Sonny is not a Mormon, but his wife, Lola, is a lifelong member of the church, and their four children have been raised as Mormons, which, says SI, “makes him a minority on two fronts.”

According to SI, Rahm Emanuel, Chicago’s mayor, said, “Jabari is unique. His family has great values. Jabari has earned the right to be a role model for kids in Chicago. His character and seriousness of purpose are exceptional.”

“Jabari admits that he feels a big responsibility to be a good example. I know there are a lot of eyes on me.’