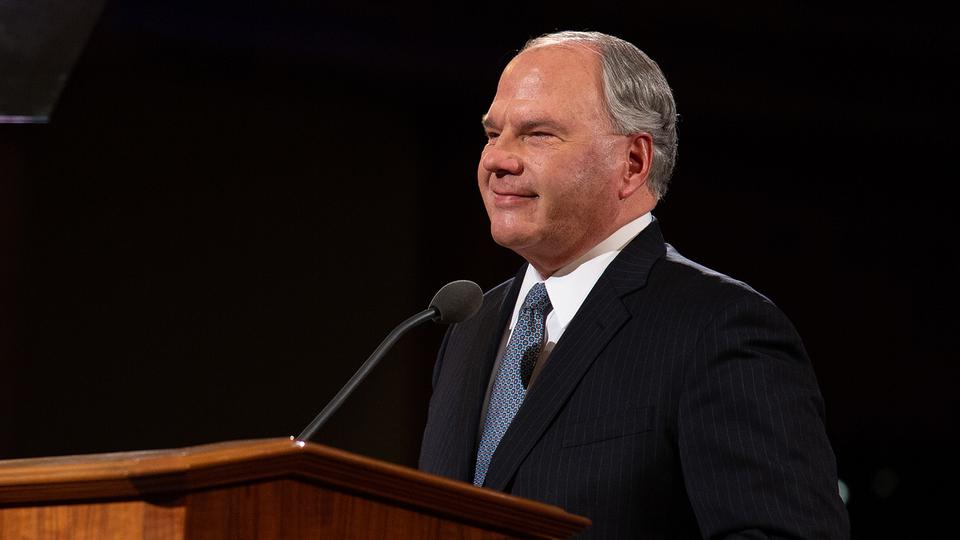 For those seeking help, the National Suicide Prevention Lifeline can be reached at 1-800-273-TALK. The Church of Jesus Christ of Latter-day Saints also provides suicide prevention resources at suicide.lds.org.

Elder Ronald A. Rasband of the Quorum of the Twelve Apostles encouraged Church educators worldwide Friday night to “talk to teens about suicide and love them out of considering suicide as a solution to their pain.”

Calling teen suicide a “crisis reaching all around the world,” the apostle of The Church of Jesus Christ of Latter-day Saints told educators that “we must all face this issue. As members of [the Church], we must commit to do everything we can to reshape the thinking that suicide is an answer, a response worth considering.”

Elder Rasband’s remarks came at the Church Education System’s (CES) annual “Evening with a General Authority” devotional on Temple Square. The global audience included 3,088 Seminaries and Institutes employees. Also watching were 47,536 volunteer teachers and missionaries around the world, most of them outside the United States. This volunteer group contributes more than 21 million hours of educational service each year.

The apostle cautioned educators against the complacence that can come when a student’s visage and life seem normal — a lesson he said he has learned since being named to the Utah governor’s Teen Suicide Prevention Task Force in January 2018.

“There is no template for who is at risk,” Elder Rasband said. “These youth play the trombone, sing in the choir, play on soccer teams, or bag groceries after school. They come to church — some of them — they are the friends of those who come to your classes, though some have long since set aside religion for themselves.”

The adversary is “not content with what he has carved out of the kingdom of God on earth so far,” Elder Rasband admonished educators. “He wants more. He is aggressive and ruthless. He is targeting those in your care; we are seeing in some their ‘hearts failing them for fear’ (Luke 21:26).”

Though suicidal thoughts can come to anyone, Elder Rasband counseled educators to be alert to several common suicidal threads that may encounter among their 730,000-plus students. These include “disappointment, a botched quiz, a breakup, a string of bullying, academic stress, and what we might call adolescent misery.”

Elder Rasband, whose calling is to be a special witness of the name of Jesus Christ throughout the world (Doctrine and Covenants 107:23), said an educator’s best approach to fostering hope is to tap into the healing and enabling power of the Messiah.

“Christ’s enabling power is manifest in the simplicity that He is there for us. Come what may, He will be with us, He will comfort us, and He will heal us if we come to Him and draw upon His power to save us. Most often He heals the wounded heart,” Elder Rasband said. “How does it happen, we ask? By the power of the Atonement exercised in our lives today, not at the end before the final judgment, but every day as we seek to be like Him.”