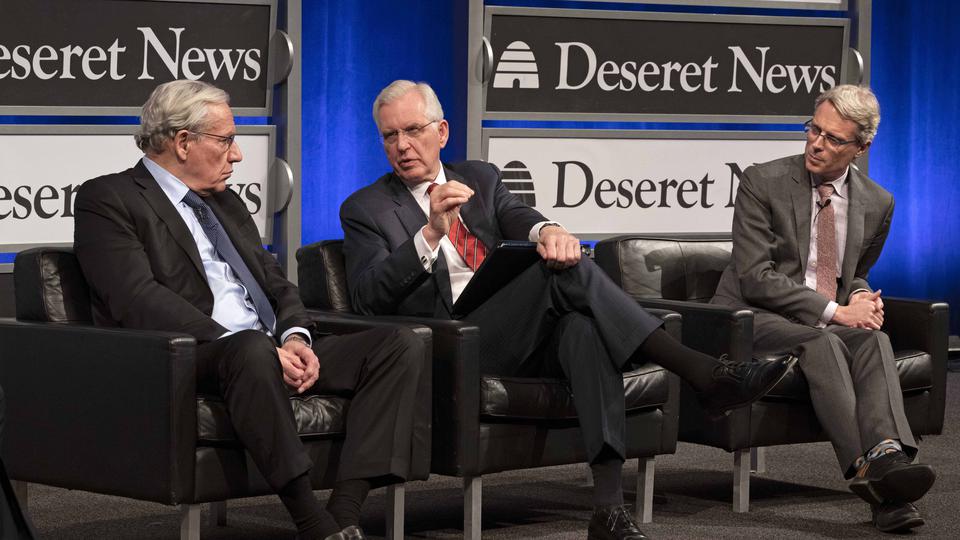 An apostle of The Church of Jesus Christ of Latter-day Saints sat down with renowned journalist and author Bob Woodward at the Newseum Monday night to discuss lessons of integrity and trust learned from the Watergate scandal of the 1970s.

The Watergate scandal, named after an office complex in Washington, D.C, led to the resignation of United States President Richard Nixon in 1974, after the president and his attorney general, legal counsel and closest aides were implicated in efforts to cover up a break-in at the Democratic National Committee’s Watergate offices. Members of the president’s reelection committee had devised a plan to illegally enter the offices at the Watergate complex to plant listening devices.

“Watergate was really an effort by Nixon and his people to destroy the process of nominating and electing a president,” said Woodward, an associate editor at the Washington Post and author of 19 best-selling nonfiction books. “The day Nixon resigned, which was Aug. 9, 1974, he gave a farewell address. … He said, ‘Always remember, others may hate you but those who hate you don’t win unless you hate them and then you destroy yourself.’ Think of the wisdom that he had at that moment.”

Woodward co-authored “All the President’s Men,” a chronicle of his and Bernstein’s investigative reporting of the Watergate scandal. The duo has also co-authored four other Watergate books.

Elder Christofferson said the lessons he has gleaned from Watergate reconfirmed the things he learned as a child at home and at church, as well as what he taught later as a Latter-day Saint missionary in Argentina.

“I feel fortunate that integrity and trustworthiness were emphasized in my life at home growing up and fortified by a religious upbringing and teaching,” he said. “I can’t claim perfection, but I’m grateful for that training at an early age. … The Watergate experience taught me the importance of integrity and trust like nothing else.”

The apostle described the shock he and Judge Sirica felt when they heard President Nixon on tape offer to pay a bribe to obstruct justice.

“It hit the judge very hard,” Elder Christofferson said. “He said it was ‘like a blow to the gut,’ a ‘punch to the gut.’ This from somebody who had an amateur boxing career before he became a judge or a lawyer, and he knew what he was saying. I felt the same.”

Elder Christofferson said an upshot of his experience during Watergate is knowing that some public servants really are trying to do good and our individual decisions in small spheres of influence really do matter.

“We’ve got to feel accountability — I think always. At least to God if nowhere else,” Elder Christofferson said. “Even in small things I think you have to be careful. When it seems you won’t get caught or it doesn’t matter or it’s just too small, I don’t think you can make an exception. None of us can escape, I feel, the responsibility for our own selves, our own conduct, our own integrity. And that may be the greatest contribution we can make.”

The evening also featured Michael Dimock, the president of the Pew Research Center. His presentation provided context to the discussion via research findings about trust in individuals, elected officials and public institutions.

The forum was sponsored by the Deseret News and moderated by its opinion editor, Boyd Matheson.

It's unfortunate that as such a stellar reporter Bob Woodward has no interest in ferreting out the truth about the 2016 election, and the illegal and unwarranted spying that went on against the Republican Presidential nominee. There is far more documented proof of attempted election tampering in our last election than in the Watergate situation. Both are equally bad. Integrity matters, irrespective of political affiliation.