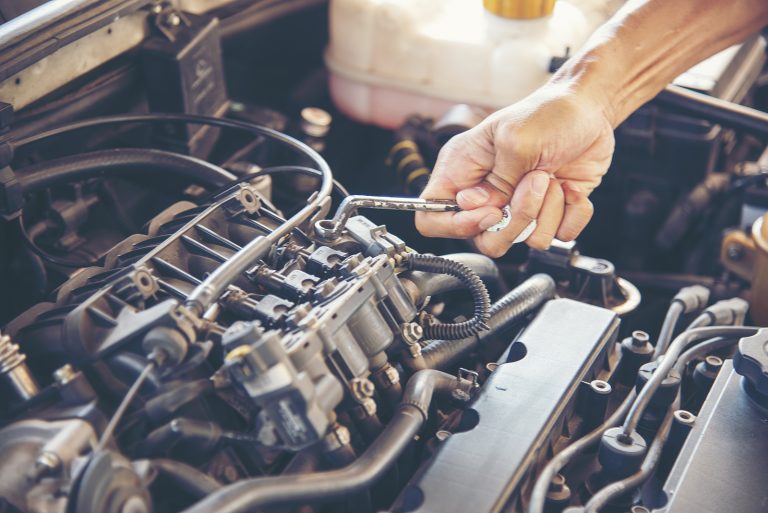 My high school mechanics teacher assigned team captains by our grades on the book work.  Sam had the highest score and was assigned to the first team.  I had the second-highest score and was assigned as head of team two.  Four more boys were also assigned as team captains.  The other thirty-nine boys were distributed to the six teams based on grades.  But we quickly learned that good book-work grades did not necessarily translate to excellence in doing actual mechanic work.

Our teacher had six engines, one for each team.  He “bugged” the engines so they wouldn’t start.  These bugs could be as simple as draining all the gas from the tank or as complicated as replacing good wires with bad ones, which looked fine on the outside but were dead inside and didn’t carry electricity.

We continued to learn new things each week, but Friday was our favorite day.  Every Friday, our teacher would go through each engine, doing the same hacks to each one, and then we would race to see which team could get their engine running first.

I learned that often, the team members who struggled to pass tests on classroom work did the best job on the engines.  I determined the strengths of each team member and assigned them to that specialty.  We all helped each other, but each person was in charge of their own area, and the rest of the team deferred to them on it.  With that strategy, my team always had any hacked engine running in less than ten minutes.

Sam, on the other hand, drove his team crazy.  He felt he knew more than anybody and insisted on making all the decisions, only letting his team make suggestions.

On one particular competition day, our engine was cranking but did not fire.  Our team member specializing in the fuel system and carburetor assured us there was fuel getting to the cylinders.  Our spark plug expert found no spark there.  I took apart the distributor and tested the rotor and capacitor, which was my specialty.  The capacitor was bad.  We switched it out for a new one, and our engine fired up immediately.

Sam’s team determined similar things, but instead of checking to see if something was wrong inside the distributor, Sam insisted the engine wasn’t cranking fast enough.

Riley, one of Sam’s team members, said, “That’s crazy!  The engine cranks fine.”  But Sam decided he knew better.  He pulled over two battery chargers, connected them to the battery, and turned them both to the highest boost setting.

Riley, who was testing the electrical system on the engine, had turned his back to Sam.  Our team had our backs to him as well.  But I smelled something and heard sizzling.  I turned and saw the two chargers connected to the battery, with acid bubbling out of the holes on top.

We dashed away, and so did all of Sam’s team except for Riley, who was still bent over the engine.  We had barely moved to a safe distance when the battery exploded.  A wave of battery acid hit Riley from the back.

We immediately hauled him over to the emergency shower.  Even though he had on full-length coveralls, his clothes underneath were wet from both acid and water, and he was mad.

Riley started yelling at Sam and was threatening him with bodily harm when the class bell rang.  Sam took off running to his next class.  Riley jerked off his coveralls, threw them on his hook, and ran after Sam.

I stayed with a few others to help clean up, and by the time we finished, we had missed most of our next class.  As I hung up my coveralls next to Riley’s, I bumped his, and the whole back of them peeled away and fell to the floor.  We all gasped and looked at each other.

Knowing the acid may have soaked through to Riley’s clothes, our teacher said, “I think it might be good if one of you told Riley about this.  Immediately!”