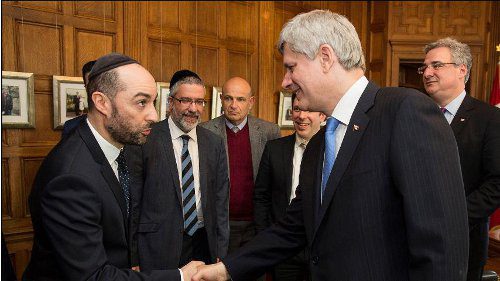 To read the full article and interview on Aish.com, click here.

“The defining moment for me was when ISIS (released) pictures of children crammed up in a cage dressed up in orange jumpsuits while outside a soldier held a flame to them. I said to myself, ‘Steve, you’re going to act.'”

By now we’ve all seen the photos of prisoners and refugees; we’ve each read of the atrocities unfolding across the world. For most of us, the daily parade of misery and unthinkable brutality we see in the news can feel numbing: when we read of tragedies unfolding thousands of miles away, it can seem natural to feel that nothing we personally can do possibly could make any difference.

For one Jewish businessman in Montreal, averting his eyes wasn’t an option. Steve Maman, a 42-year old father of six, would seem at first to have little if anything to do with the Iraqi victims of kidnapping and slavery a world away in Iraq. A crystal wholesaler and antique car dealer and father of young children, Maman might be forgiven for feeling that he was too busy to try to help.

In an Aish.com exclusive interview, Maman explains that doing nothing simply wasn’t an option: “It’s my Jewish education.” As a child, Maman attended Montreal’s Maimonides school which stressed the interconnectedness of all Jews and all people. When Maman and his classmates learned about the Holocaust, he recalls learning “it didn’t happen to the Ashkenazi community – it happened to the Jewish community overall. My teachers removed the barriers, teaching that we are all connected. This is what prompted me to recognize the pain that was being inflicted on those people and feel a visceral connection with the Christians and Yazidis in Iraq.”

To read the full article and interview on Aish.com, click here.