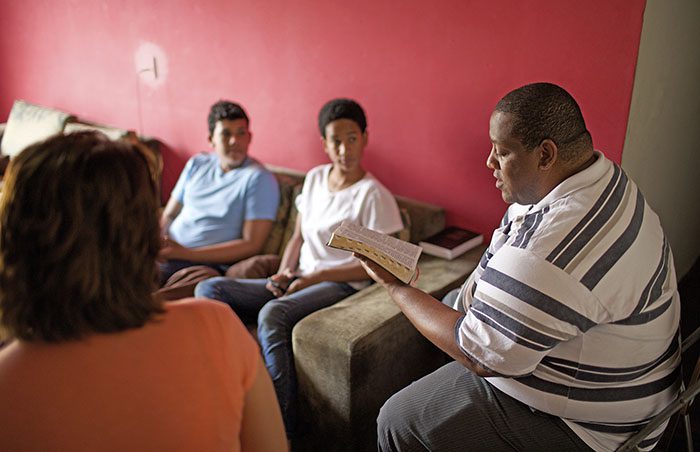 The following is the First Presidency message for the month of March. It comes from President Henry B. Eyring.

God’s prophet on earth, President Thomas S. Monson, has declared, “Today, we are encamped against the greatest array of sin, vice, and evil ever assembled before our eyes.”1

Would you be surprised to learn that President Monson uttered those words 50 years ago? If we were encamped against an unprecedented array of wickedness back then, how much more so does evil threaten us today? For good reason, the Lord has proclaimed of our dispensation, “Behold, the enemy is combined” (D&C 38:12).

The war in which “we are all enlisted”2 began before we were born on earth. It began even before the earth was created. It began many millennia ago in the premortal realm, where Satan rebelled and “sought to destroy the agency of man” (Moses 4:3).

Satan lost that battle and “was cast out into the earth” (Revelation 12:9), where he continues his war today. Here on earth “he maketh war with the saints of God, and encompasseth them round about” (D&C 76:29) with lies, deception, and temptations.

How do we battle such a foe? How do we fight against the evil that appears to be engulfing our world? What is our armor? Who are our allies?

The Power of the Lamb

The Prophet Joseph Smith taught that Satan has power over us only to the degree that we permit him.3

Seeing our day, Nephi “beheld the power of the Lamb of God, that it descended upon the saints of the church of the Lamb, and upon the covenant people of the Lord, who were scattered upon all the face of the earth; and they were armed with righteousness and with the power of God in great glory” (1 Nephi 14:14; emphasis added).

How do we arm ourselves with righteousness and power? We keep the Sabbath day holy and honor the priesthood. We make and keep sacred covenants, work on our family history, and attend the temple. We strive continuously to repent and plead with the Lord to “apply the atoning blood of Christ that we may receive forgiveness of our sins” (Mosiah 4:2). We pray and serve and testify and exercise faith in Jesus Christ.

We also arm ourselves with righteousness and power as we “treasure up in [our] minds continually the words of life” (D&C 84:85). We treasure up those words by immersing ourselves in the holy scriptures and in the words of the Lord’s chosen servants, who will share His will, mind, and voice (see D&C 68:4) during next month’s general conference.

In our battle against evil, we must always remember that we have help from both sides of the veil. Our allies include God the Eternal Father, the Lord Jesus Christ, and the Holy Ghost.

Our allies also include the unseen armies of heaven. “Fear not,” Elisha told a fearful young man as they faced an army of evil, “for they that be with us are more than they that be with them” (see 2 Kings 6:15–16).

We need not fear. God loves His Saints. He will never abandon us.

I know that God, in answer to prayer, has fulfilled my petitions to deliver me from evil. I testify that with the help of God the Father, the Savior of the world, and the Holy Ghost, we can be assured that we will be given more than enough power to withstand whatever evil forces we face.

May we always be armed with righteousness so that we can have confidence in the ultimate victory.