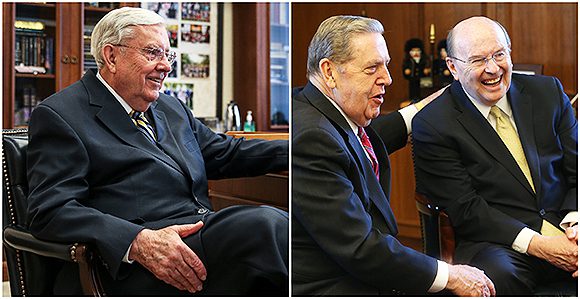 180 Years in England: Apostles Discuss Significance and Legacy of Missionary Work in the British Isles

In 1837, The Church of Jesus Christ of Latter-day Saints faced economic turmoil, financial panic and dissent among some of its leaders and members.

In the middle of those difficult trials, the Prophet Joseph Smith was inspired to call Heber C. Kimball and others on a mission to Great Britain, the first outside of North America.

What resulted from those and subsequent missionary labors in the British Isles proved to be a tremendous blessing for the Church, making it a pivotal event in Church history, said Elder Jeffrey R. Holland of Quorum of the Twelve Apostles.

“I think it’s almost impossible to overstate the significance of that first mission,” Elder Holland said. “You could say those British immigrants of the 1840s and 1850s … and later the Scandinavian Saints who joined them … probably saved the Church numerically.”

Wednesday, July 19, marks 180 years since early apostles Heber C. Kimball and Orson Hyde, along with Willard Richards, Joseph Fielding, John Goodson, Isaac Russell, and John Snider, arrived in Liverpool, embarking on a historic mission that would bring thousands into the faith. In timing with the anniversary, Elder M. Russell Ballard, Elder Holland and Elder Quentin L. Cook, members of the Quorum of the Twelve Apostles who served missions in England, recently discussed the impact and significance of the first British mission and how its legacy continues to influence the Church today.

Thank you for acknowledging the important role the English played in the early history of the Church. But no one ever mentions the role that my ancestor, Amasa Mason Lyman, played in the early history of the Church in England. He was an apostle at the time and in charge of the mission during the time he was there. Although he was later both excommunicated and reinstated, I think it is time that he is brought out of the obscurity that came because of his later temporary disaffection. Even former apostles should be at least mentioned if they played a significant role in early Church history.