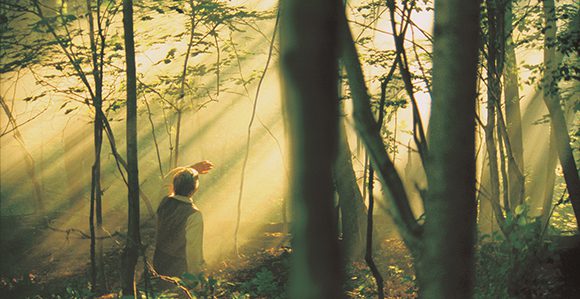 Why Did So Many Key Events of the Restoration Happen on the Equinox?

In the spring of 1820, (calculated by some scholars to have been March 26, 1820 [1]), near the spring equinox, God the Father and Jesus Christ appeared to the boy Joseph Smith, Jr. in a grove of trees near Palmyra, New York. God called Joseph in his youth to prepare for a special work.

In 1823, Moroni visited Joseph Smith on September 21-22, the fall equinox. Any importance in these equinox dates? First, it communicates that God has a cosmic calendar for earth time. Ancient astronomers relied on naked eye astronomy before the invention of the telescope. Picture #1 (below) is a simple illustration of how the equinox is the sun’s midpoint between winter and summer solstice standstills. Some first American cultures still view this kind of horizon calendar.

Three years after the First Vision, Moroni descended from heaven to talk with Joseph the night of September 21, 1823. He introduced himself as a resurrected prophet from ancient America who had completed his father Mormon’s record of ancient American civilizations. [2] The next day, September 22, fall equinox, the angel Moroni directed Joseph to go to a hill, not far from the Smith family farm in Manchester, New York, where the records written on gold plates were buried in a stone box.

Once there, Joseph pried up a rounded lid from the stone box that held the gold plates, interpreters, breast plate, and Laban’s sword. When he reached in to take the plates, he was hit by a tremendous shock that threw him on his back. Moroni forbade Joseph to take the plates [3] and censored him because the thought had crossed his mind to use the gold plates to prosper his poor family. Moroni instructed Joseph that the sacred records were not to be used for personal gain. Their only value was the knowledge contained therein to establish the kingdom of God on the earth. If Joseph did not follow Moroni’s instructions, he “should be destroyed.” [4]

Why did Moroni visit Joseph on the fall equinox each year? How does the fall equinox relate to God’s cosmic calendar clock in the eternal scheme of things? The ancient Israelite calendar has major fall harvest festivals. The Hebrew New Year – Rosh Hashanah (calculated in lunar month cycles) occurs on or near the fall equinox (Leviticus 23-24), the harvest time of the year.

We must understand the basic calendar in order to understand and appreciate the importance of the equinox in the annual life cycle of nature on earth, and in this Church History study. From my studies of the ancient astronomy at the Izapa Temple observatory in southern Mexico, I learned that the sun equinox is central in the life cycle journey of the year on earth. Equinox means ‘equal’, the mid-point between the northern summer solstice sun’s standstill (pictured below-left) and the southern winter solstice sun’s standstill (below-right) through the lunar months of the year.

During the equinox, nearly equal amounts of daylight and darkness are experienced throughout the world. Ancient Izapa-Maya astronomers of Central America calibrated their calendars on equinox dates. [6] Equinox is a cyclic day count division point meaning an equal set between winter and summer solstice standstills. This gives central balanced harmony to the entire visible cosmic calendar on earth as will be described below (see Illustration #1 and #2). [7]

Some past researchers have argued that equinox calendars were too difficult for ancient Native cultures to identify. Not so! They were very keen observers, studying the bright starry heavens and moonlight at night, and sun rises on the eastern horizon and sun sets on the western horizon. The sun equinox regulates and governs the six-month seasonal life cycle between the spring planting season, summer growth, and autumn harvest season. The equinox day count point is determined by the 364-5 day lunar-solar year that divides the year into two equal halves. Once a total year day count is found by sighting on one solstice, it is fine-tuned by counting 182 days between both solstices. Equinox is then fine-tuned by counting 90 days on either side to the solstices (see Illustration #2).

The easiest place for this observation is the level ocean horizon using sighting poles like gun sights. Mountain horizon calendars provide fixed features for pinpointing exact calendar-dated events in the year, which Hopi calendar observers, and other Pueblo Indians still practice. [8] The Hopi claim ownership of the sophisticated Parowan Gap sunrise and sunset calendar observatory in Utah, with shared contacts in Mexico and Central America. [9] The ancient Mexico-Izapa/Maya calendar of most importance to Book of Mormon chronology study is shown in Illustration #4 [6]. At Izapa, this horizon calendar establishes equinox within the full sun-moon and Venus calendar system and sets the stage for restoration history, and further Book of Mormon history studies.

Six months after the fall harvest season (September-October), the spring planting season (March-April) and Passover week are celebrated. Passover is the commemoration of the children of Israel’s exodus from Egypt, when the destroying angel took the firstborn of the Egyptians, but passed over the homes of the Israelites who had marked their doorposts with the blood of lambs, symbolic of the divine sacrifice of the Savior of the World (Exodus 12).

Once Joseph began translating the gold plates, he struggled until April of 1829, when the Lord sent Oliver Cowdery, a well-educated school teacher in Palmyra to assist him as scribe at Harmony, Pennsylvania, while he dictated from sacred interpreters. They began the translation on April 7. It was completed in about 60 days, and printed soon after. The book binding was finished, ready for sale on March 26, 1830. This spring equinox season monumental event was ten years after Joseph’s First Vision—not a coincidence, but by divine design.

About a week later Joseph was directed by revelation to organize the Church of Christ on April 6, 1830, “being one thousand eight hundred and thirty years since the coming of our Lord and Savior Jesus Christ in the flesh” (D&C 20:1) on Passover week. [10].

Six years later on April 3, 1836, the Old Testament Prophet Elijah returned to Ephriam’s descendants in the Kirtland, Ohio Temple at the very time of the Jewish Passover (D&C 110) with Moses and Elias, and conferred the keys of the sealing powers of the Priesthood upon Joseph Smith and Oliver Cowdery. For centuries the Jewish people have anticipated the return of Elijah at the Passover. Observant Jews await him still, not knowing that he has already returned. [11]

A circle with Fall Equinox (left) and Spring Equinox (right).

A painting of people attending the first major General Conference [12]

The first major General Conference of the Church was implemented by Joseph Smith on the weekend of April 5-7, 1844, at the unfinished Nauvoo Temple site in Illinois, attended by 20,000 Saints.[13] This three-day conference commemorated the organization of the Church 14 years earlier, as well as the Hebrew Passover week in the spring equinox season, and the Savior’s birth—precursor to Annual General Conferences in the Church today. As we participate in the October Semi-annual General Conference, we can reflect on Moroni’s fall equinox visits to the young Joseph in New York to bring forth the Book of Mormon, and look forward in six months to the 2020 Spring Equinox, which is the 200th Bicentennial celebration of Joseph Smith’s First Vision in 1820.

As we have learned, fall and spring equinox seasons were of great importance in the Restoration of the Church of Jesus Christ of Latter Day Saints, and continue to be important for us today as we participate in the Church’s fall October and spring April General Conferences. In ancient calendars of Central America, the ancient Hebrew equinox seasons were also of great importance. The ancient Izapa, Mexico horizon calendar (Illustration #4) is a focal point for the Izapa Temple calendar that correlates with the ancient Hebrew fall equinox New Year season celebrations. [6]

The illustration pictures the eastern horizon as seen from the Izapa Temple Center. Equinox “F” is at the right, and summer solstice “C” is closer to the left of this Tajamulco Volcano horizon in Southern Mexico. Watch for future articles about the ancient equinox based astronomy-calendar of the high civilization Izapa Temple in Southern Mexico. [14]

[4] Book of Mormon, Introduction “Testimony of the Prophet Joseph Smith.

[7] Illustration of Solstice and Equinox sunrises on the eastern horizon: https://earthsky.org/astronomy-essentials/how-far-does-sun-move-on-your-horizon-each-day

[10] http://www.johnpratt.com/items/docs/2018/birth_of_christ.html. According to scriptural insights and ancient dating, the Savior, Jesus Christ was born on Thursday, April 6, 1 B.C., at the time of the Passover and began his ministry on April 6, A.D. 30.

From the day March 29th 2007 while reading in rhe 29th Chapter of Mosiah to the phone conversation with John Pratt a few weeks later, I found an outline in the records of #AlmaHijo and his son #Helaman that links the term #sabbaticalYear in the LDSbibleDictionary to the seventh and 49th years of the reign of theJudges over the #pueblosdeNefi...making the last year of #KingMosiah's Reign and Ministry a #JubileeYear event.

What Obstacles can Block Us from Receiving Revelation for our Families?