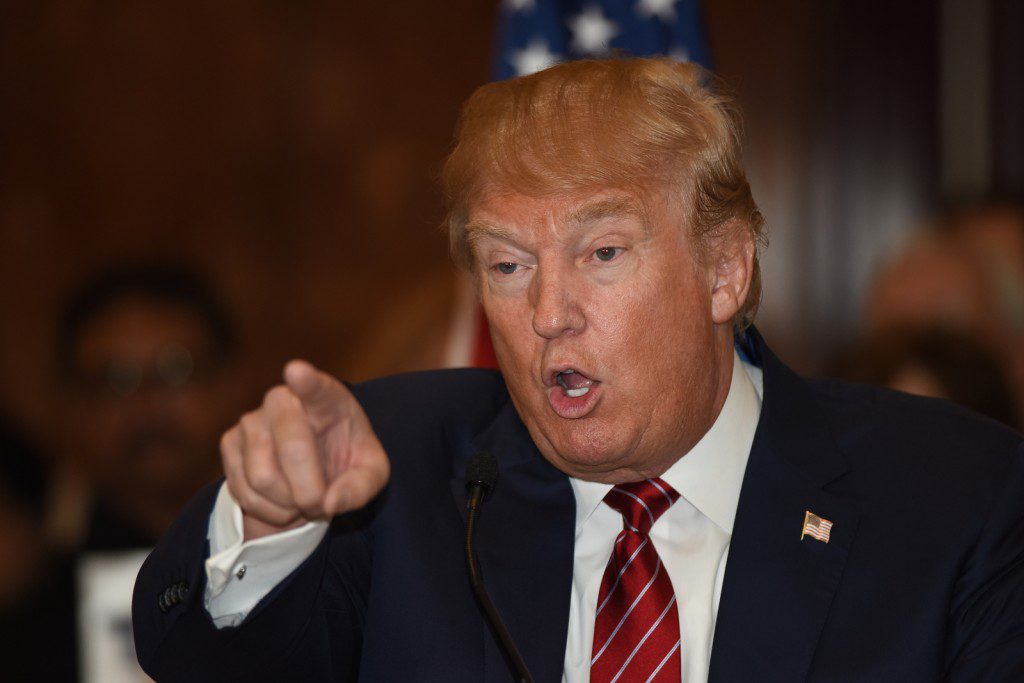 What in the World Does Anyone See in Trump?

As always, the opinions and views expressed here are those of the author alone and do not necessarily represent Meridian Magazine as a publication.

Taking Donald Trump to task is too easy. No one has ever blown himself up to be larger not only than life, but than a Macy’s Thanksgiving Day Snoopy Balloon. He knows the pot shots are coming but only inflates himself more, caring less for the incoming fire.

Nowhere does he get more incoming righteous indignation fire than from Utahn’s seething with wrath for his Gadianton visage, lack of Cleon Skousen upbringing and the missing Ezra Taft Benson sensibilities for the Constitution. Many that I meet insist Trump is not a Republican, neither a consistent conservative nor even a conservative, and so forth. Others just say he is evil…pure evil, although I’ve never understood that oxymoron.

I’ve had plenty of Romney clones assure me Trump is a phony and his billions of dollars aren’t real. That Trump’s business failings, unlike Romney’s, were big deals, but their sources are always “a friend of a friend told me and he knows.”

I assure them that like Marc Antony, this Mark has not come to praise Caesar but to bury him. Or at least understand him – and like Oppie told Sheriff Andy, “Let’s give him a fair trial and then hang him.”

To that end I’ve gathered my wheel barrows of research collected not only from when the Donald first announced he was running , but in the mid 1980’s when I first saw him in New York City and read his light weight book, The Art of the Deal. My business associate at the time, Byron Boothe, assured me he didn’t think much of the flamboyant millionaire because he had dinner in Trump’s group and Donald had a drink… with an umbrella in it. What kind of a hard driving real estate mogul drinks Shirley Temple’s, Byron insisted. Turns out Donald is a teetotaler and doesn’t care if anyone likes it or not. Pretty much the way he does everything.

Back to a year ago. When my brother called me from California to let me know he’d heard Trump had thrown his hair into the ring to run for the presidency I asked for which party. I half expected he’d gone back to the Reform Party of Ross Perot. But, no, he declared he was now a Republican all the way. Unless they weren’t nice to him. I told my brother I wouldn’t hold my breath. Give Donald a week or two to self-destruct with several off-message comments that would sink his tenuous ship.

In the months since then Trump has scored more off-message comments than I can count and they’ve driven his media coverage through the roof along with his negatives. In my previous life as a political hack in D.C., the president of our grassroots citizen’s lobby, Neal B. Blair used to preach that if you can drive the opponents negatives high enough, he could never recover.

Well, Trump has gleefully collected the negative rule books and a bunch of other campaign conventional wisdom rule books and burned them on his way to a commanding lead and the probable nomination of the Republican Party. And, yes, my friends in Utah, he actually is a Republican according to all of the ballots and Republican Party records.

One high ranking Republican friend at the Utah Republican Convention I attended confided in me that his daughter had been doing research on Hitler’s rise to power and he thought it scary how many similarities there were with Trump’s rise. I yawned and suggested about 10 points where Winston Churchill’s rise was also similar. He paused to give that some thought, and then concluded that powerful people do tend to have much in common with their accumulations of power – both those who do it legitimately and those who don’t. In fact, Ted Cruz’s methods of scoring delegates is actually more comparable to some of Hitler’s tactics than Churchill or Trump’s methods of populism. At least Hitler started a party and kept to it while both Churchill and Trump changed parties. (Knowing history is a bummer.)

My friend asked why I supported Trump and I said, “whoa, cowboy. The election isn’t today. I have no vote until November. I support no one. I’m in a state of gathering information. Pondering.” So he asked me, “What is good about Donald Trump?”

I suggested that the first clue to that answer is that if you have to ask that question it might be that your personal prejudices are so high that you’re blind to the obvious strong points. I asked him, “Why do you think so many otherwise intelligent people like Dr. Ben Carson, Phyllis Schlafly, Geraldo Rivera, Rudy Gulliani, Sheriff Joe Arpaio, Newt Gingrich, Lou Dobbs, Ann Coulter, Bill O’Reilly, Sean Hannity and Rush Limbaugh have good things to about Donald Trump? (Not that they’ve all endorsed him, but they do say many good things about him.) Why does his ex-wife who he admits he severely wronged, stand up for him so strongly and promote him as a presidential candidate?”

He thought about it. “Those aren’t stupid people. I think it’s his innate or perhaps developed sense of leadership in getting something done. He has gotten things done and in a government that’s in gridlock; in Washington D.C. where we’ve both worked and nothing works, our fellow citizens are sick to death of politicians who can’t get anything to work.”

I agreed. Despite Mitt Romney’s protestations about Trump being a phony, Trump has actually accomplished quite a lot. Just look at the heaps of criticism about all of the buildings with his name plastered on the top – Trump. He’s got an edifice naming complex for sure. But, they’re on buildings he’s built. When’s the last time you built a building. As a former general contractor, I have respect for anyone who even dabbles in building. It takes a considerable amount of coordinating leadership to pull together the subcontractors, inspectors, materials and testing to put even a small house together. Try doing it for a skyscraper in Manhattan. Trump has accomplished more in business than Mitt Romney, and Mitt has an impressive resume.

Like any business person, Trump has made mistakes – some whoppers in fact. So did Romney. Our country was founded on people who were unafraid to make whoppers. Big deal. Some of Trump’s businesses were either ugly, shady or awful. I have no interest in dealing in gambling or strip joints. For him it was just another business. Voters will have to weigh the evidence and compare those legal but unsavory businesses with the way Hillary Clinton conducted the seamy quid pro quo and crony capitalism of the Clinton Foundation. I suspect that will end up a wash with neither side getting clean.

My friend asked about Trump’s divorces. Yep, he’s had them. Of course Kasich had one and Trump had two. Not sure if we’re supposed to keep score. Some insist Donald’s penchant for marrying beautiful eastern European models is a disqualifying trait. I’d rather not get into the peccadillos of past presidents. It broke my heart when I found out Ike stepped out on Mamie Eisenhower, but then again, she was no pin up model so does that factor back into the equation or should we just stop this sort of questioning? Unless we bring up Marilyn and Jackie and JFK. Aww. I give! Monica beat them all and Hillary enabled.

In the end, we both decided if Trump were to be the Republican nominee, the best advice is to study up on him without all of the knee-jerk reactions and try to sift through his character and issues. Ignore his smoke screens and lack of political sophistication in giving well thought out political double speech…something we both agreed was at least refreshing.

We listed a few thinks we both like about Trump:

Now the anti-women charge. It’s obvious from his business dealings that he employs and promotes freely men and women of any and every race. He sees green first. At least so far as the evidence is concerned. True, he’s made terrible comments about a handicapped person and about Rosie O’Donnell and some other individual women. That makes him a jerk, not a racist, bigot or other “ists.” He seems to be an equal opportunity offender at times, and a charmer at others. Don’t know how he’ll change in the Oval Office. Could be a problem if he gives Angela Merkel a weggie or tries to high five the Pope.

We’re not about to coronate him, not by half, but at least he’s not Satan and deserves a fair hearing before we string him up at the Convention. We mostly found his greatest positive is… he isn’t Hillary Clinton.

Quote from this article: “Why do you think so many otherwise intelligent people like Dr. Ben Carson, Phyllis Schlafly, Geraldo Rivera, Rudy Gulliani, Sheriff Joe Arpaio, Newt Gingrich, Lou Dobbs, Ann Coulter, Bill O’Reilly, Sean Hannity and Rush Limbaugh have good things to about Donald Trump?" Whoa. That is a pretty scary list. some of these people are even more reprehensible than Mr. Trump (Ann Coulter? Rush Limbaugh?) ... If this is a list of people that Brother Stoddard respects as intelligent, good sources of information, that is all I need to know about his opinions. I wish him well, but respectfully submit that he and the readers of Meridian Magazine can do better. The contortions many LDS people are going through to make themselves feel okay about voting for Trump is really sad. Didn't President Hinckley ask us to "Stand for Something?" Stand for virtues like honesty, civility, morality...One cannot support Trump and stand for these values at the same time.

My problem with voting for Trump is simple. He has no core values. He is the poster child of narcissistic personality disorder. I was married to someone with a personality disorder. If you believe nothing else about this election, believe this: If you vote for someone with a personality disorder, we will lose our democracy. It will not survive. Go to bpdfamily.com and get on their message board. Read what is really happening in these familes. Pick up a good biography of Chairman Mao and see how this plays out in the real world. Stop believing in illusions. Trump is exactly who he says he is.