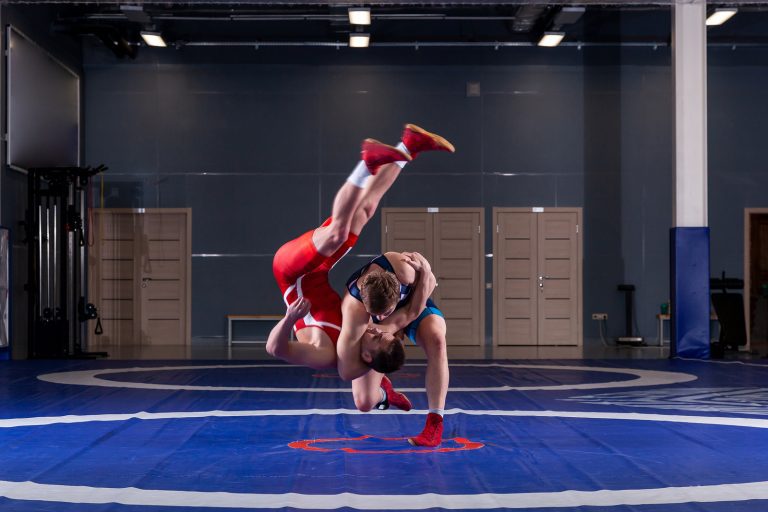 Coach had put our marshmallowish water boy, whom we called Curly, or Sheep, because of his hair, in to wrestle, claiming there were no other heavyweight wrestlers. Coach said Curly could win us team points by default. He had no uniform of his own, so we had to stuff him into mine each time. Then, at the championship round, we found there was a huge ape-size heavyweight from the home team. Curly was frightened, but Coach told Curly he would wrestle and die like a man if he had to.

The evening wore on, with our team taking a large share of the championships. As I stepped out to wrestle in my now-saggy, stretched uniform, Coach turned to Curly. “Curly, run in and get ready to put on Howard’s. . .” But Curly wasn’t there. “Where in tarnation did Curly go?!” Coach thundered at us.

“Well, get him found!” Coach yelled. “Howard, you get out on the mat and wrestle your match. The rest of you spread out and find Curly.”

While I wrestled, ten other wrestlers ran frantically in every direction. As I stepped off the mat at the end of my match, Frank came running up, panting. “Coach, we found him. He’s locked himself in the bathroom in the dressing room.”

“Oh, for crying out loud!” Coach gasped. “Howard, get in there, get that uniform on him, and get him out here before I do something I will regret!”

I ran for the locker room and slipped out of my uniform. I could hear Lenny trying to coax Curly out of the bathroom. “Sheep,” he said, “what’s the problem, man?”

“I want to live to be older than 15,” Curly wailed from behind the locked door.

“You’ve got to do it, man,” Lenny prodded, “or Coach is going to make you walk home.”

By this time, I was dressed in my regular clothes, and I tried to help. “Curly, my friend, you may not be alive if Coach catches you. They’ve already done the first call, and if they call you again, Coach will be coming in here.” All was quiet in the bathroom, so I continued. “Just go out there and keep away from him.”

Frank came flying into the dressing room. “Coach is coming!”

At the mention of Coach, the bathroom door popped open, and Curly ran to the uniform. We joined him and started poking pieces of him into it as Coach crashed into the room. “What in heaven’s name is taking so long?!”

“The uniform’s wet and tight from sweat,” I replied.

“Well, get a move on!” Coach thundered as he headed back out to the gym.

We barely arrived back in the gym, with Curly in tow, as the third call came. Curly, both timidly and gingerly, stepped onto the mat, taking tiny steps, as my wrestling suit, stretched like a rubber band, fought to stay in one piece. Curly’s opponent took his position on the opposite side of the circle. They shook hands, and we all held our breath as the referee blew his whistle.

The shrill sound of the whistle hadn’t even faded before Curly was running for the edge of the mat like a ballerina in a hundred-yard dash. It was obvious he was racing straight for the bleachers, but he didn’t get that far. Just as he made the boundary of the circle, Mr. Mack Truck made a dive and caught Curly by the ankles, tripping him and plopping him, bouncing, onto his soft underbelly on the edge of the mat. Mack then started to drag Curly back toward the center circle.

Curly, in desperation, grabbed the edge of the mat and held on for dear life, popping all the tape that held it down, and rolling it toward the center. The ref, who was gasping with laughter, sounding like he had swallowed his whistle, was trying to find enough air to blow it. Finally, a tiny squeak came out. The laughter of the crowd nearly drowned it out, but the two wrestlers were finally separated. The ref, still red-faced from trying to hold his laughter inside, pointed to Curly and called, “Warning! Stalling!”

“I wasn’t stalling,” Curly yelled at him. “I was running as fast as I could in this stupid suit!”

The clock showed only ten seconds had passed of the first two-minute round. It was going to be a long match.

Cruel yes....but I'm not laughing!!! I'm wishing I could get my hands on that coach! This story had better have an amazing ending, with Curly as the happy hero!!!

You are so cruel to make us wait for another teaser installment of this story. I am dying laughing and waiting for the next part.