"The Courage of a Prophet, and the Kindness": Remembering President Thomas S. Monson | Meridian Magazine 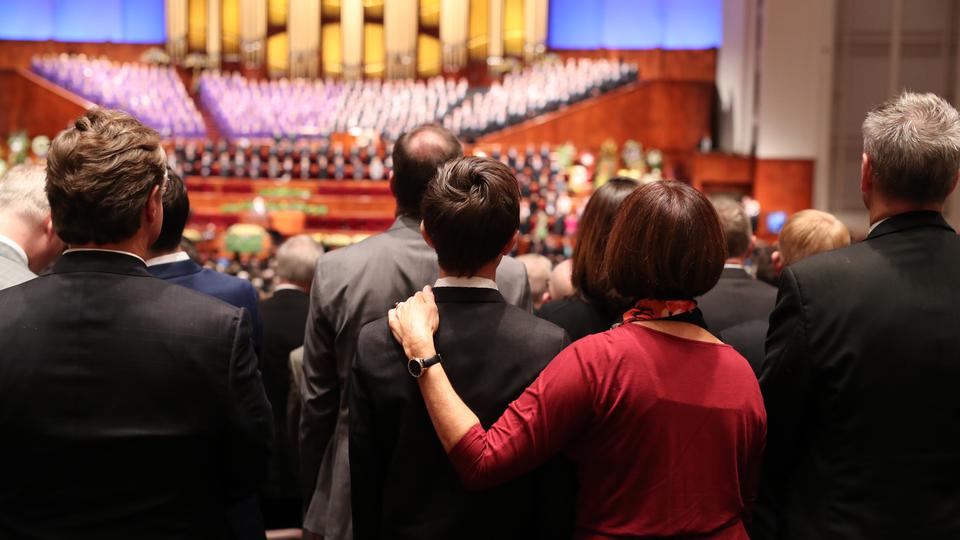 “The Courage of a Prophet, and the Kindness”: Remembering President Thomas S. Monson

I couldn’t help thinking, as I watched people filing into the Conference center under the watchful gaze of the gleaming, golden organ, that this is an awfully public way for a daughter to say goodbye to her daddy or a grandson to say goodbye to his grandpa. What would it be like to attempt to achieve the intimacy of a familial celebration with thousands just behind you watching and waiting? But President Thomas S. Monson, called as a bishop at only 22 years old, has lived his whole life this way, given himself and all of his time in service to the Church and to the Savior Who is at its head. There is perhaps no better way to honor him than from the very pulpit where he has so often delivered the word of the Lord, with his extended Church family watching with love and admiration.

There was a waterfall of floral arrangements on the stand, some of them bearing affectionate emblems of his personal history; a Canadian flag reminiscent of his call at age 31 to be a mission president there, a University of Utah “U” for his educational experiences and many other beautiful floral symbols of a life well-lived. All of them were lovely, but seeing them also reminded me that President Monson had once greatly admired the request he read in someone else’s obituary: “in lieu of flowers, take an old person to lunch.” After hearing a funeral service full of yet more examples of Thomas S. Monson’s personal ministry to the sick and aging, I think I know what some lunch this week will have to hold in lieu of the flowers I would’ve liked to add to the stand. The bishop and stake president from Thomas S. Monson’s own ward were in attendance. It is a testament to the amazing organization of this Church that even the prophet has a bishop.

The Mormon Tabernacle Choir punctuated the meeting with stirring renditions of music chosen by President Monson himself. Consider the Lilies and Dear to the Heart of the Shepherd particularly stood out to me for their messages that seemed to perfectly coincide with his life.

Ann M. Dibb, the prophet’s daughter, was first to take the stand and honor her dad’s life. She spoke of the different types of legacies he will leave behind, but not before reminding the congregation and the Church that, “Although he was a prophet, my father knew he was not perfect.” With a smile on her face and glistening tears in her eyes, she told of a time when he saw his own picture on a copy of a Church magazine and pointing to it said, “I know that guy; he tried his best.” His best, she said, was typified in coming to the end of a day and being able to say, “I feel we’ve done some good today.”

It was eye opening to think of Thomas S. Monson as just a guy doing his best. Though he would bear such a great and growing spiritual responsibility as the years of his life progressed, he still had to make decisions and try to improve and build himself line upon line just like the rest of us.

She also recounted how her father’s desire to do good “often went beyond his capacity to do so, considering his many responsibilities.” When this was the case, he would reach out to others to visit or serve on his behalf. He would make a call that sounded something like this, “‘Is this my friend Mack? This is Tom. How would you like to paint a bright spot on your soul today?’” Translated, this meant that he needed a service favor. Ann went on to emphasize that we don’t need to be the President of the Church to notice others the way her father did. We can reach out and paint a bright spot on our own souls whenever we find the opportunity.

President Dieter F. Uchtdorf also offered a word of tribute about the man that he said he considered a friend long before he actually met him. He repeatedly called him a ‘man for all seasons’ recounting how, many years ago when President Monson visited Hamburg, Germany, he asked about a member who had been one of the “stalwart pioneers of the Church in Germany.” Because of illness, the brother was no longer able to attend Church meetings. President Monson wanted very much to visit him, but he lived on the 5th floor of a building with no elevator and President Monson had very recently undergone foot surgery, making it difficult to walk.

President Monson insisted that they go anyway. “It was a very painful climb for [him], but he cheerfully went on.” When they reached the home of this brother, President Monson gave him a wonderful priesthood blessing, thanked him for all of his Church service and cheered him up with a smile. It was just further proof that he, like the Christ that he strived to emulate, “went about doing good.”

Crowds outside the Conference Center where Funeral services were held. Photograph by Michaela Proctor.

It was in pondering both President Uchtdorf and President Eyring’s remarks that I saw Thomas S. Monson’s life of service in a new light. It would be easy to think of the widows and the bedsides and the generosity and think any good person who loved and cared about others could and would do those things regardless of their doctrinal beliefs. But listening to his dear friends’ understanding of his testimony made me realize in a new way that his ministering to and never forgetting the one had everything to do with his understanding of Jesus Christ.

As Henry B. Eyring said:

“President Monson often quoted the promise that the Lord would be with us in our faithful service for Him. Those promises were true in his experience…’whoso receiveth you, there I will be also, for I will go before your face. I will be on your right hand and on your left, and my Spirit shall be in your hearts, and mine angels round about you to bear you up’ (D&C 84:88). Because he knew that promise was a reality, President Monson was optimistic. It also made him courageous. When he had to make difficult and important choices, he expected the Lord would answer his prayer and show him the way to go. When he was called to go into what appeared to be dangerous or perilous situations, others might be afraid, yet he felt no fear. He believed that the Lord went before him and that angels were placed around him to bear him up. That proved true.”

An incredible example of the consistency and courage President Monson demonstrated was recounted by President Russell M. Nelson, who gave the concluding remarks of the service. He told of how President Monson had worked for nearly two decades, during the Cold War era to build strong relationships with the government of the German Democratic Republic (East Germany). In 1988, Presidents Monson and Nelson traveled together to East Berlin, to the capital of a country that had been closed to missionary work for more than 50 years, to ask for permission to have missionaries serve there again.

“This critical meeting was held on the gray and dreary day of October 28, 1988. We met with Erich Honecker, Chairman of the State Council for the German Democratic Republic, and his staff. He started with a long speech about the merits of communism. All we could do was listen. Then, under the flashing of countless cameras, President Monson was invited to speak. He boldly, but kindly presented his message of how and why our missionaries would be good for that country. After President Monson’s plea, all awaited Chairman Honecker’s response. I was breathless with anxiety. I will never forget Chairman Honecker’s reply:

“‘President Monson, we know you. We have watched you for many years. We trust you. Your request regarding missionaries is approved.’”

In President Monson’s incredible 67-year chapter of Church history, he has seen the Church go from 2.1 million members to nearly 16 million. He has participated in taking the earth from only twelve temples to 159 today, with more on the way. When he was called as an apostle, there were 5,700 missionaries compared to the nearly 70,000 serving today.

Flag at half-mast on Temple Square. Photo by Michaela Proctor.

I wonder where President Monson could get the unwavering faith to live the life he has lived and endlessly give the service he has given. It takes great courage and trust in the Lord to boldly move forward and not just believe, but know that the Lord will go before you. I suspect his Heavenly Parents could say like that German Chairman did, “Tommy, we know you. We have watched you for many years and we trust you.”

May we strive to be worthy of that same trust from the Lord. Though President Monson’s time in mortality has come to an end, he has left teachings and an example that will live on as we attempt to learn from and follow it. The funeral of a Latter-day Saint is never totally without the joy of our knowledge of the resurrection; a resurrection that, as Elder Jeffrey R. Holland said in the closing prayer, will be as certain for this prophet of God, as it is glorious.

We thank thee, O God, for this prophet and we hope to earn thy trust as he did.

Watch the entire funeral service below:

Thank you for writing and sharing this historic moment. I watch from the islands of the Pacific and witness with millions of members. A prophet of God who follows the Savior in ALL he does, not perfect always trying. I will try and always try to follow the prophet, that is courage to ACT when a sweet inspired message is received. I pray to always be worthy for the direction of the spirit.