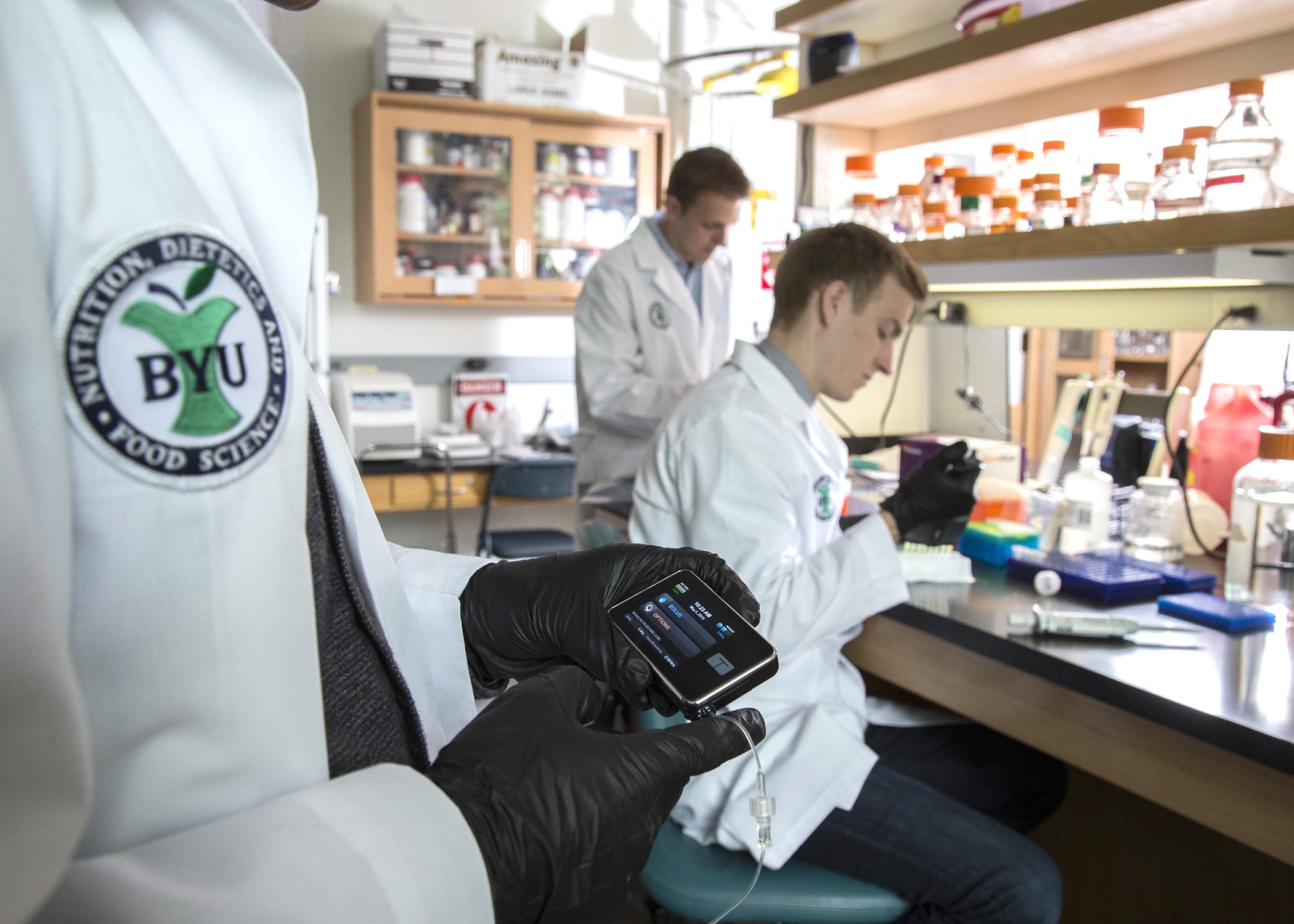 Professor Jeffery Tessem has pinpointed a gene that may help solve a riddle at the root of diabetes, the high-blood-sugar disease affecting 400 million people worldwide.

To peel back the cellular layers and understand that gene better, he’s turned to some experts with extensive personal, daily knowledge about the disease: students with diabetes.

Four of the students in Tessem’s nutritional science lab have Type 1 diabetes, the genetic version of the condition that is unrelated to diet and lifestyle. Two were diagnosed while on LDS missions, two were diagnosed on their birthdays, and all of them want to find answers.

“We’ll always be the first ones to volunteer to get injected with whatever’s next in search of a cure,” said Sam Grover, a sophomore. “My diagnosis has given me a path in life and I’ve found what I’m passionate about—because it’s who I am.”

The same can be said for lab-mates Mathew Ballard, Benjamin Bitner and Chad Tidwell. The four of them have become a support group of sorts as they work alongside each other in their quest for progress.

Led by Tessem, they’re investigating the molecular pathways that can activate the replication of beta cells. Beta cells are insulin-producing pancreas cells that are attacked and destroyed by the immune system of those with Type 1 diabetes.

Tessem’s team, which includes researchers at Duke University Medical Center, is concentrating on Aurora Kinase A, a gene that not only causes beta cells to replicate, but also helps them maintain their ability to identify glucose and secrete insulin in response.

The group’s findings are published this week in Islets, an academic journal dedicated to research on insulin, beta cells, glucose and other elements of diabetes.

Tessem and the students aim to define all the genes that let beta cells replicate, so that in time, chemists can devise drugs that can activate or shut off those genes.

“If we could give beta cells back to a patient who is diabetic, that would be a way of treating their diabetes,” Tessem said.

Current methods to reintroduce beta cells to diabetics include taking beta-cell-producing islets from cadavers and transplanting them into a patient. To have a sufficient amount of beta cells for islet transplant, one needs two cadavers worth of islets. Lining up enough donors that have matching blood and tissue types for each diabetic is prohibitively expensive, timely and sometimes minimally successful.

Knowing the pathways that induce beta cell growth could reduce the amount of islets needed for a recipient, or, perhaps, could lead to solutions where a patient’s own residual beta cells replicate without a transplant.

Of course, the end goal is to cure diabetes.

“To not have to worry anymore about insulin injections or our blood sugar, and to be able to live normal lives,” Grover said. “That’s the hope.”

I was diagnosed at age 24 w type one diabetes and am very interested in your work. This is exciting and if you need help finding people w type one for testing let me know

Keep up the good work !!! My husband lived with Type 1 Diabetes for 50 years before he passed away. Thanks for putting your effort and energy into finding a cure for this terrible disease.