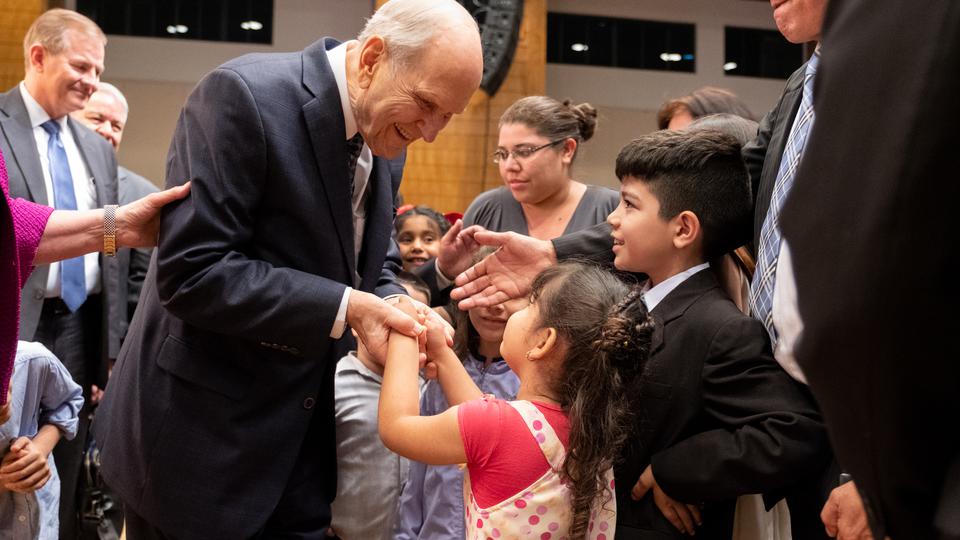 President Russell M. Nelson of The Church of Jesus Christ of Latter-day Saints offered advice to strengthen families as he visited Asunción, Paraguay, Monday, October 22, 2018. This is the third destination in his five-country South America ministry tour, which will culminate with the dedication of the Concepción Chile Temple on Sunday, October 28.

Traveling with President Nelson on the nine-day journey are his wife, Wendy, and Elder Gary E. Stevenson of the Quorum of the Twelve Apostles and his wife, Lesa.

President Nelson addressed Latter-day Saints at a devotional Monday evening, which was held at the Conmebol Convention Center in Asunción. The meeting was broadcast to all stakes in Paraguay.

In his remarks President Nelson said, “We shall always remember what we see here tonight. We feel your great faith.”

He continued: “What are you going to teach your children? I would like to suggest you do what the Savior did. Teach your children about the Lord, and great shall be the peace of your children. I plead with you to teach your children what it really means when they sing, ‘I Am a Child of God.’ They are created in His very image. And He has given them a great gift of a body, with a heart that beats, with a brain that thinks, and all of these marvelous attributes they have. Teach them to converse with their Father in Heaven. Help them to understand why we take the sacrament on Sundays and why the Lord came to planet earth to restore His Church again.”

He added: “The Lord restored His Church to bless the lives of all God’s children. Life is hard. We have challenges. And yet He’s taught us how we can deal with our challenges and have joy in our lives.”

Sister Nelson and Sister Stevenson also spoke to the large crowd gathered to hear words of inspiration from the prophet and other Church leaders.

Following the devotional, President Nelson and Elder Stevenson were interviewed by members of the Church media, including Newsroom. They reflected on their experience of ministering in three countries in South America so far.

“It’s been just remarkable,” said Elder Stevenson, who has watched the prophet speak to the Saints in Spanish. “I never imagined that I would come and have to wear a headset, through translation, to listen to the words of President Nelson. That was a surprise to me.”

Earlier in the evening, the two leaders met with young single adult Latter-day Saints from the Ascunción area. “They were model young people. I just wish that all the young people in the world were as handsome and beautiful as those young people,” the president said. “My, they were just simply clean and pure and beautiful. They’re the brightest of the bright.”

The young single adults were thrilled with the opportunity to meet with President Nelson and Elder Stevenson. “I was very happy to be close to the voice of the Lord on the earth. I felt a very deep love and concern for each one of us. Even though we just met him, I felt like President Nelson knows us personally,” said Diego Cristaldo.

After listening to President Nelson’s advice, Ilse Brítez said she “could feel that the Savior is aware of us, and if we strive to obey the commandments and be a good example we will be able to help other people to come back [and] stay strong in the faith.”

Victor Fernandez added: “One of the special feelings I felt when I heard the prophet is to feel that our Heavenly Father truly loves us. I like that he has taught that as we keep the commandments of our Heavenly Father and His Son, Jesus Christ, we can find joy and happiness. Even though there are bad days, we will feel happiness. I think that is what we all are searching for.”

In the afternoon, President Nelson and Elder Stevenson met with missionaries of the Asunción and Asunción North Missions.

On Saturday, October 20, they were in Lima, Peru, to meet with missionaries and local members, as well as Peru President Martín Vizcarra. On Sunday, they spoke at a devotional in El Alto, Bolivia.

The South America ministry tour runs October 19–28, 2018. The senior Church leaders are meeting with Latter-day Saint members and missionaries, government and religious leaders and friends in Peru, Bolivia, Paraguay, Uruguay and Chile before returning to Salt Lake City. The ministry to the people of South America ends with the dedication of the Concepción Chile Temple on Sunday, October 28.