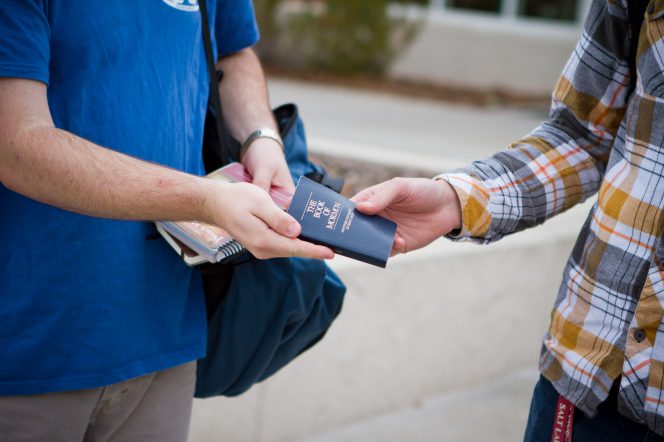 The following was written by Kerry Harding for the “Missionary Moment” series curated by Mark Albright.

Several years ago, two young guys from Salt Lake City set about to create a documentary on the perceptions of the “man on the street” regarding the Church of Jesus Christ of Latter-Day Saints.

The results of this “research” was released in a DVD called American Mormons.  As my family sat down to watch this, I thought I might be mildly amused by some of the misconceptions.  I was not prepared to be completely flabbergasted by how little most Americans know about the Church in general, let alone the specifics.

For example, according to one respondent, Mormons are lizard people who came to Earth from Mars.  He didn’t actually know of any though.  He had just heard about them.  Another respondent, when asked to describe the differences between Mormons and other religions, said, “Mormons can’t use any kind of technology—electric lights, cars, computers, etc.  They believe in doing things the old-fashioned way.”  Judging from the responses of a lot of other people too, apparently the word “Mormon” is interchangeable with the word “Amish.”

Amazingly, the most commonly mentioned famous Mormons were the Olson Twins (Mary-Kate and Ashley) and comedian Steve Martin—none of whom are actually Church members.

For those people who actually knew Church members, the response was usually on the positive side.  Phrases such as “really nice,” “clean-cut” and “wholesome” were frequently used, along with terms such as “always stand up for their beliefs,” “they really live their religion,” and “they’re always happy.”

What conclusions can we as Latter-Day Saints draw from this project?

That one of the comments, “Mormons are kind of clannish—they always stick together,” is more correct than we’d like to admit.  Let’s face it—most of our free time is spent doing things with other members of the Church. Whether it is in relationship to our church positions or social events to whom members of the Church are invited.

We need to broaden our horizons.  It’s no wonder we rarely have any friends for the missionaries to teach.  Most of our friends are already members!

Thinking about my own sphere of influence, since I work for myself at home.  I have very few people within the workplace to interact with.  However, I do have clients, candidates, vendors, suppliers, etc.  I have neighbors, service workers and craftsmen who perform various tasks around the houses I own.  I have people whom I serve with in activities and projects at my kids’ school—the All-Sports Boosters, Lacrosse team, Choral Boosters, etc.

To my knowledge, none of these people are members of the Church.  I wonder, if someone were to stop any of the people within my circle of influence and ask them what they know about Mormons, what their responses would be.

I would hope they would say, “They’re always kind.” “They’re compassionate.” “They’re generous.”  “They’re hard-working.”  “They keep their commitments.”  “They’re trustworthy.”  While those are all attributes I would like people to think of when they think of me, I’m not sure if they would.

One of the first principles that new missionaries learn is “building relationships of trust.”  They have to learn to do this in minutes, if not hours.  We, on the other hand, have days, weeks, months and even years to do that and, in fact, have already done that with many, many people.  We just don’t take it to the next step.

There are many things—easy things—that we can do to help erase the ignorance in our community regarding who we are and what we believe.  Here are a few:

Though we are a “peculiar people,” through some simple acts, we can help correct the misconceptions that surround our faith and, in doing that, maybe create a desire in another person to know just a little bit more.

I love the idea of carrying around Article of Faith cards to pass along. What a great idea!