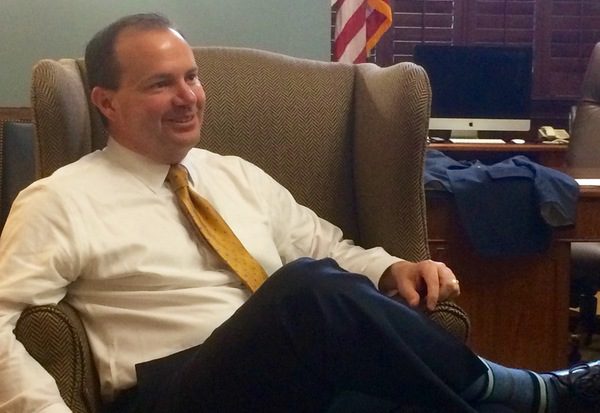 Excerpts from an article on RealClearReligion appear here. To see the full article, click here.

Nicholas G. Hahn III, the editor of RealClearReligion recently sat down with Senator Mike Lee to discuss his new book, Our Lost Constitution: The Willful Subversion of America’s Founding Document. Lee discusses the ways in which aspects of the Constitution have been reinterpreted and misapplied in today’s judicial system: “There’s no reason why the Federal courts should be delving into all kinds of intricate questions over whether a city council can put a crèche or a menorah outside of its chambers.” Those are state issues, Lee says, and have “nothing to do with the establishment by Congress of a national religion.”

Lee says our government is pervaded with a vigilant, hyper-secularism that can be traced back to precedents set in the early 20th century:

Which brings us back to the Supreme Court’s upcoming decision whether states must license same-sex marriages. “What I worry most about is what’s going to happen to religious freedom,” Lee frets. When Justice Samuel Alito asked Solicitor General Donald Verrilli, Jr. what might happen to a religious university’s tax-exempt status, for instance, if it continued to oppose same-sex marriage in spite of a Court ruling. “It’s certainly going to be an issue,” Verilli replied, “I don’t deny that.”

“That scares me to death,” the Utah senator told me.

He says Verrilli’s “troubling” response was “part of what convinced me to draft legislation that would prohibit the government from discriminating against any person or group of people who for religious reasons believe that marriage is between a man and a woman.”

Senator Lee belongs to one of those groups that believes in traditional marriage for religious reasons and he was not shy in openly sharing with Mr. Hahn some of the other things that members of The Church of Jesus Christ of Latter-Day Saints believe.

To hear what Senator Lee had to say, click here.

Thank you Senator Lee for your diligence, loyalty to the Constitution and to traditional marriage. it is imperative we understand the oral argument put before the Supreme Court concerning same sex marriage and the loss of religious freedom that would result https://www.supremecourt.gov/oral_arguments/argument_transcripts/14-556q1_7l48.pdf JUSTICE SCALIA: I'm concerned about the wisdom of this Court imposing through the Constitution a ¬¬ a requirement of action which is unpalatable to many of our citizens for religious reasons. They are not likely to change their view about what marriage consists of... JUSTICE SCALIA: ...If the law concerning same sex marriage is left to the states, they can make exceptions to law. You can't do that once it is a constitutional proscription...You cannot appoint people who will violate the law.

I noticed Senator Lee's legislation is dated December 2013. What has happened to it? and the House bill as well? Can Meridian provide an update, please?