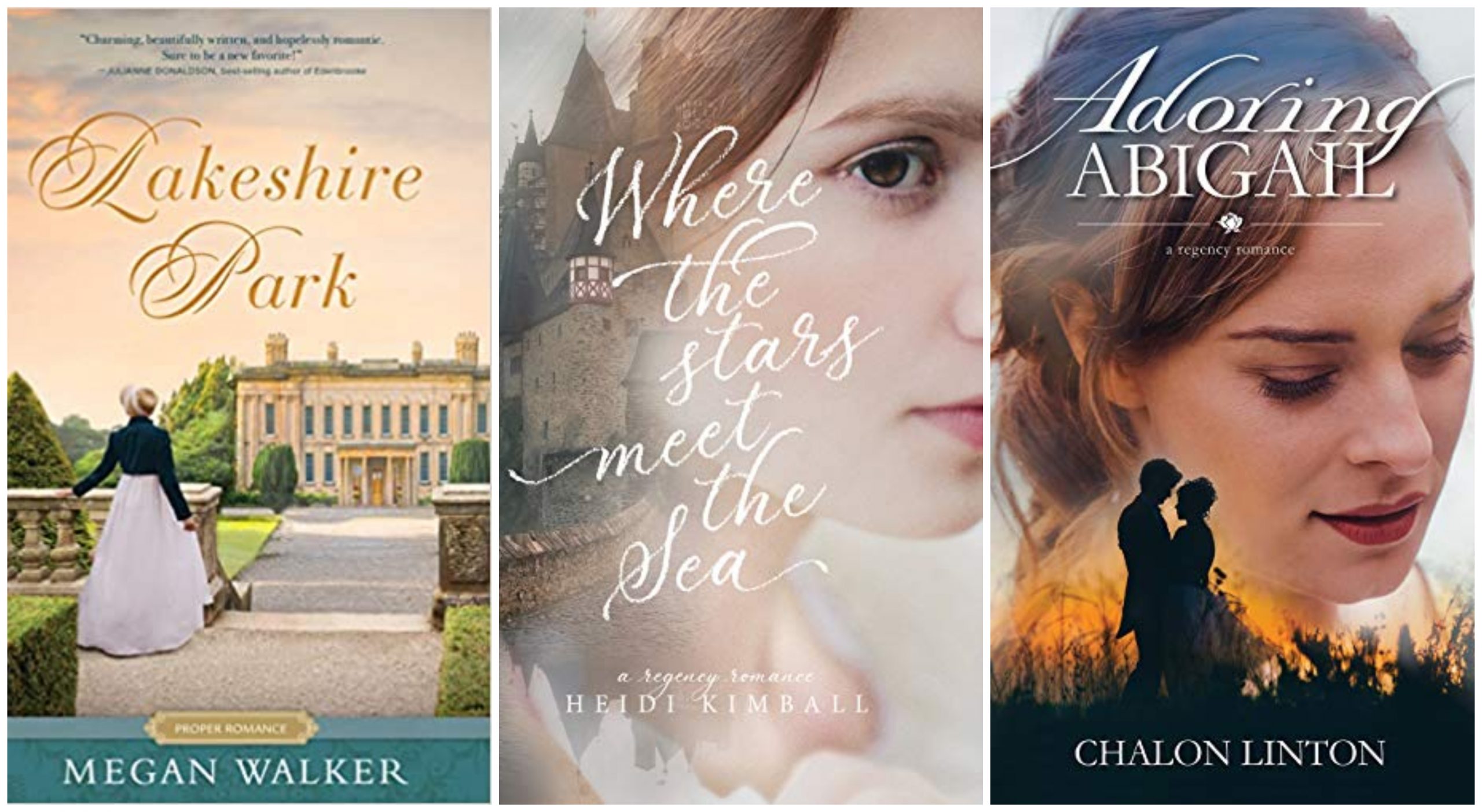 For those looking for a cheerful escape from isolation and quarantine during the current pandemic there is a new crop of Regency Romance novels available. The first, Lakeshire Park, by Megan Walker is part of the Proper Romance line. The other two, Adoring Abigail by Chalon Linton and Where the Stars Meet the Sea by Heidi Kimball, are also fun light reads fans of the genre will enjoy.

Amelia Moore and her sister, Clara, are invited to a two-week house party. Their mother who remarried after their father’s death, and who died more recently, left the sisters in the care of their stepfather who resents them and has treated them badly. Before they leave for the estate where they will be guests, he warns Amelia that he is dying and with his death they will be penniless and have no home or income. Amelia is determined to see Clara safely wed to the young man who invited them to his home. Upon their arrival they discover another young lady is equally determined to marry their host and her brother is as actively involved in assisting her quest as Amelia is in aiding Clara.

Beginning as fierce enemies, Amelia and Peter gradually fall in love though she doesn’t hold out any hope for a happy outcome. She has no dowry and if Clara fails to marry the young man she has set her heart on, how can Amelia marry into the family that caused her broken heart? Also their host’s mother has unknowingly provided a solution for Amelia. She has a nephew who recently lost his wife and is looking for a wife to raise his daughter and assist with his social responsibilities. Love isn’t part of the arrangement.

This well-written Regency is a fast, fun read. The characters are well developed and likable, but they do stray at times from the rigid rules of the time period. The setting and background portray the Regency era well and the plot moves at a steadily escalating pace to a satisfying conclusion.

Megan Walker’s background is a little different. She grew up on a berry farm in Missouri. She earned a degree in Early Childhood Education from Brigham Young University. She and her husband have three children. They make their home in St. Louis, Missouri.

WHERE THE STARS MEET THE SEA by Heidi Kimball

Juliet Graham and her younger brother were orphaned at a young age. Left in the care of their snobbish aunt, Juliet is anxious for her twenty-first birthday and control of her own life and fortune. Uppermost in her hopes is the chance to rescue her brother from the school he hates where he has been sent by their aunt. Forced to attend a house party, Juliet manages to insult their host, the Duke of Halstead, a man permanently crippled in an accident and who has withdrawn from society. As her birthday approaches Juliet finds herself drawn to the duke, but her aunt holds her brother’s future over her head to force her into a loveless marriage with her cousin, the aunt’s son, and her fortune under the control of the cousin and his mother.

This is a typical Regency with its emphasis on class, fortune, and a hapless woman with little or no rights of her own. Juliet is a likable character, but the Duke isn’t as likable as the cousin. The aunt is the most realistic in her dialog and her actions. The setting and the background fit the mold for the time period and social level. The storyline holds the reader’s attention and the plot moves in a smooth arc to the expected conclusion.

WHERE THE STARS MEET THE SEA by Heidi Kimball, Published by Covenant Communications, Inc., 256 pages, soft cover $15.99. Also available on CD and for eReaders.

Captain Robert Wilkins receives an unexpected surprise when his great aunt bequeaths him her grand estate. He hardly knew the woman and never aspired to such luxury. He doesn’t know why she chose him to be her heir. He feels a bit out of place until he meets a young lady from a neighboring property who makes regular visits to his gardener.

Abigail Rutherford is shy, avoids social interaction as much as possible, and has a speech defect over which first her mother, then her grandmother have made her life miserable. As friendship grows between Robert and Abigail, they aren’t free to follow its course. The local vicar launches a determined suit, enforced by Abigail’s grandmother, to force her to marry him.

This story starts slowly and doesn’t include much action, but it, nonetheless, is a sweet satisfying short read. The characters are realistic. The setting is formula Regency and the plot rises in increasing intensity to a satisfying conclusion in keeping with her strong belief in wit, manners, and true love.

Chalon Linton and her husband live in Southern California.