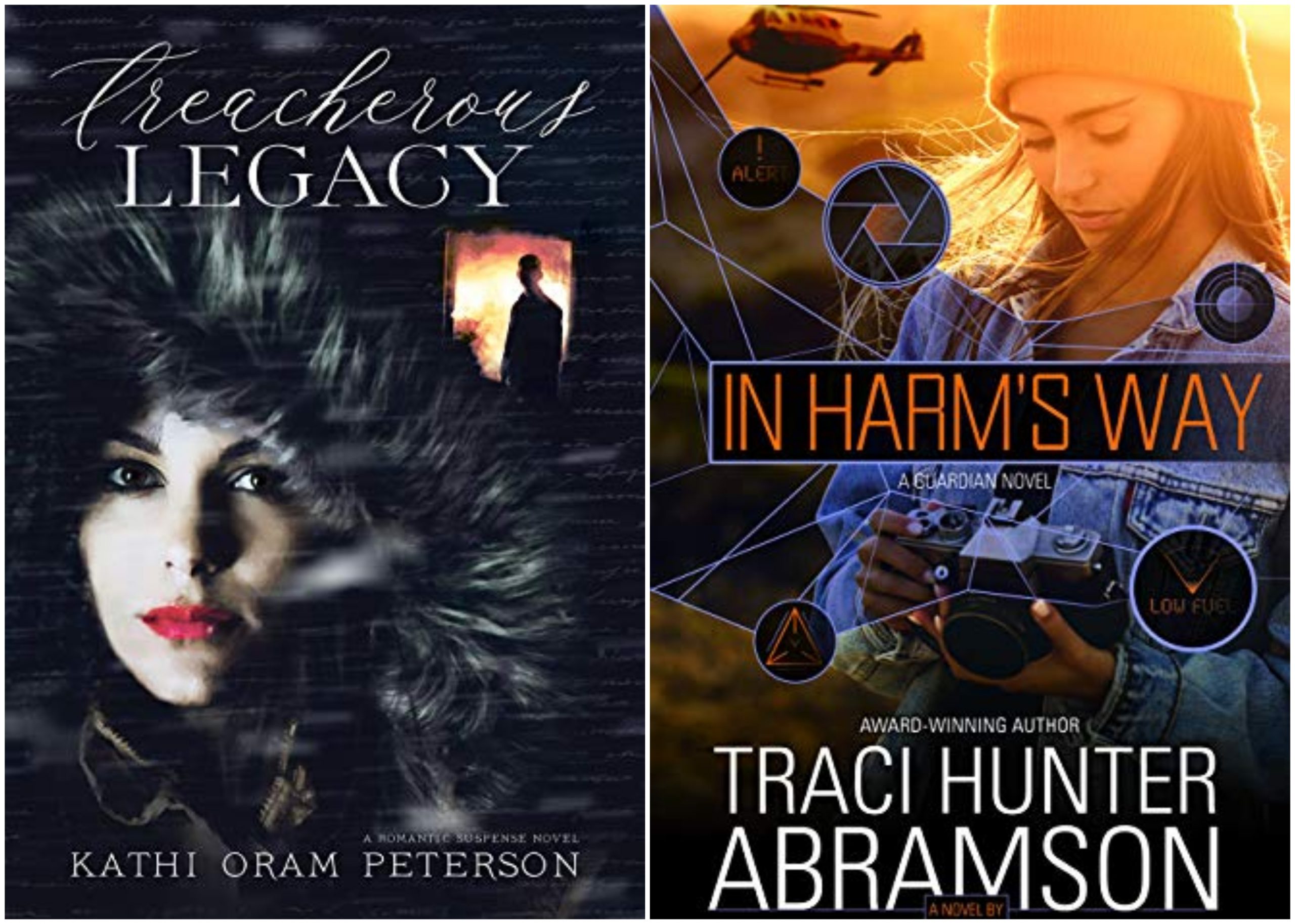 Bored with staying home, winter, and, and social distancing? Spice up your life with either or both of these exciting novels, Treacherous Legacy by Kathi Oram Peterson and/or In Harm’s Way by Traci Hunter Abramson.

With Treacherous Legacy, Kathi Oram Peterson has written a spy thriller that harks back to World War II and follows up with both the Jewish descendants and the descendants of the Nazi supporters. Modern day Anna Braverman, who lives in New York, is summoned to meet her uncle at a café outside of Raykjavik, Iceland. She and Uncle Ezra are the last living members of their family and descendants of a famous Jewish artist who disappeared during the war. That ancestor, Anna’s great grandfather, was accused of being a Nazi sympathizer. Uncle Ezra          wants her help disproving this assumption.

Kristofer Tomasson is a journalist who recently interviewed Ezra. When Ezra is murdered, Kris guesses the old man passed on valuable information to his niece, putting her life in danger too. He pursues her and joins her search for the truth, both for an exclusive story and because of the strong attraction between the two. Their search for answers takes them to Denmark and long , then

As the story unfolds it goes far beyond a great Mystery/Suspense story with a touch of romance. It reveals snippets of information about the efforts by Israel and the Jewish faith to strengthen their people, punish those who betrayed them, and ensure Nazi-type groups don’t rise to power again.

I liked the characters in this story. The lead characters are strong, persistent, and have the doubts and concerns anyone facing the obstacles they confront would have. Anna struggles realistically with being surrounded by people who speak a language she understands little of. Secondary characters are distinct individuals. Anna’s background is handled well. Her father’s and uncle’s past as security agents and the loss of her mother at a very young age are shown to have impacted her life and views. The setting in Iceland and Denmark felt realistic. Some readers may have a little difficulty with bits of dialog which include a Danish/English mixture.

Kathi Oram Peterson has written over a dozen spell-binding novels. She completed her formal education with a BA in English after her three children were raised. She did an internship on the University of Utah’s Continuum magazine, then was hired by a curriculum publisher.

Admittedly Traci Hunter Abramson is one of my favorite authors. I particularly enjoy her Guardian series. This series is heavy on action and suspense, is well researched, and has just enough romance to ease the high tension flow of the story. Her newest title in this series, In Harm’s Way, lives up to the high standard set by the previous four volumes. By the way, each book in the series can be read and enjoyed as a standalone book, though reading them in order adds to their enjoyment.

After a difficult childhood Troy managed to antagonize some powerful gang leaders. With a sure promise of death hanging over him, he fled his hometown, and eventually joined the military where he proved adept at both physical and intelligence skills which led to him being recruited into the Guardians, a secret government organization designed to protect agents and government leaders. When Troy steps in to maintain an island stronghold while two other agents, the owner and her husband, take a year-long assignment in Europe, he is surprised by the arrival of an attractive young woman who moves in as if sure of her welcome. Her arrival complicates his efforts to monitor and ensure the safety of a senator turned Presidential candidate who has survived a couple of assassination attempts.

Jocelyn, an advertising executive, has sold her business and decides to take a break at her sister’s island home while her sister is in Europe. She is surprised to find a caretaker there when she arrives. Though they quickly form a comfortable friendship, she is annoyed by his secretive nature. Her presence makes keeping his work as a Guardian agent a challenge and when the island’s security is breached not only must he keep his work a secret and protect the senator, but he needs to secure her safety as well.

It’s easy to get attached to Troy and Jocelyn. They feel like real people. Their backgrounds stir sympathy and their dialog is convincingly real. Some of the secondary characters were major characters in other books in the series, making it easy to view them as old friends. Strangely one of the major negative characters stirs some sympathy, too. He is a man who made some mistakes early in his life and career, then continued by justifying rather than correcting  his mistakes and letting his ego push him toward greater and greater crimes. At the same time he takes his role as husband and father seriously and establishes himself well in that role.

Both the background of the events leading up to this story and in the characters’ lives are worked in well without spoiling any of the prior books in the series. The setting shows the author’s first hand familiarity with the Washington DC to New England area.

Traci Hunter Abramson was born and grew up in Arizona. She spent a year in Venezuela with a study abroad program. She graduated from Brigham Young University then worked for the Central Intelligence Agency. She retired from the CIA to raise her family and became a high school swim coach. She and her husband are the parents of five children, though only one is still living with them at their Virginia home.