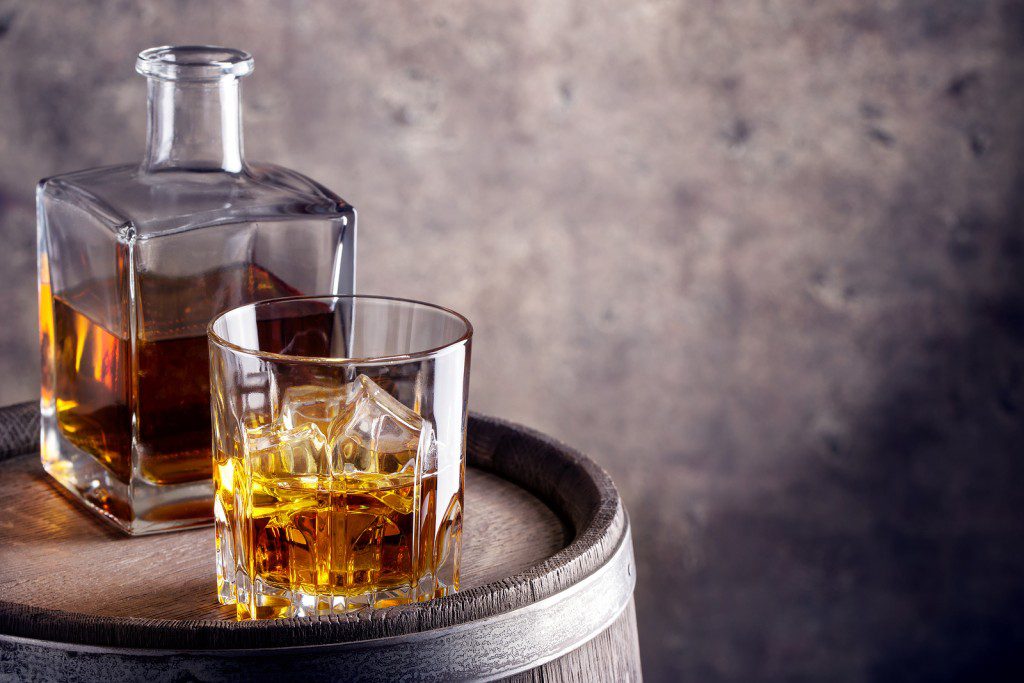 One of the Joseph Smith Papers documentaries explains why hard liquor and tobacco were Joseph Smith’s main concerns that resulted in the Word of Wisdom revelation. Life expectancy data for men and women in modern Russia dramatically shows the catastrophic negative health results from significant use of these two substances. This data from Russia in our day is very similar to the high levels of alcohol and tobacco use in the 1830’s in frontier America.

This documentary also links the Word of Wisdom admonition to eat meat sparingly with the American diet prevalent in the 1830’s.

Glenn Rawson (Host):“Understanding some of the background behind that revelation, the social issues of the day, illuminates the importance of that revelation to Joseph Smith and to the saints of his day.”

Paul Y. Hoskisson (BYU Maxwell Institute):[ii] “The Lord knew exactly what was right and what was wrong in Joseph’s day. And of all the stuff that could have been put in the Word of Wisdom, of course, the Lord knew what to put in: Those things which were of lasting importance.”

Glenn Rawson: “Alcohol, in Joseph Smith’s day, it was a most significant problem.”

Ronald Walker (LDS Historian):[iii] “You have people drinking fifteen to twenty, maybe twenty-five gallons of hard cider or whiskey each year. It wasn’t just men drinking. It was women drinking. It was children drinking. Consumption at breakfast, lunch and dinner. There probably couldn’t have been a social activity in America without spirits flowing very freely.

Mark L. Staker (Church History Department):[iv] “Tobacco is prescribed in the 1600’s and forward as the antidote to just about every malady under the Sun. Including asthma, strangely … Just about every problem that you have you can solve by taking tobacco.”

Ronald Walker: “We cannot conceive of it today, but men would go into private homes or churches, and they just spit it on the floor, this spittle. … It was a filthy practice, a horrible practice, but it was one of the prevailing social customs of the time.”

The room in the Newell K. Whitney store in Kirtland, Ohio known as the translation room where Joseph Smith received the Word of Wisdom and many other revelations.

The small room where the School of the Prophets was held. 21 of the 22 in the class the day of the Word of Wisdom revelation were smoking pipes.

The Front part of the School of the Prophet’s classroom showing the fireplace where all the members of the class threw away their pipes when Joseph Smith read to them the Word of Wisdom revelation.

A comparison of alcohol and tobacco use together with life expectancy data in the United States and Russia today underlines the serious detrimental health effects correlated with the use of these substances and emphasized in the key aspects of the Word of Wisdom.

From 1991 to 2007, Russia experienced a threefold increase in alcohol consumption, the majority of which are from “spirits” drinks like vodka, instead of the more common and less alcohol concentration of beer and wine in other countries like the US. Total per capita yearly alcohol consumption is 15 liters for Russia compared with 9 liters for the US.[vi]

As a lesser priority to Joseph Smith’s emphasis on alcohol and tobacco, this Joseph Smith Papers documentary categorizes the admonitions on the eating of meat within the context of the American diet of the 1830’s. With the popularity of vegetarian and vegan diets in our day, this research may be especially relevant as we seek to correctly interpret and implement this important advice to eat meat sparingly.[ix]

Glenn Rawson: “Meats are to be used sparingly. Now that word ‘sparingly’ has caused some confusion.”

Paul Y. Hoskisson: “Americans on those days ate a lot of meat. When it says eat meat sparingly that is a term which is a little bit nebulous. But if we put it in the context of the 1830’s, it means ‘let’s not have meat for every meal.’”[x]

Joseph Smith Papers: The Word of Wisdom in Context

I hope that readers will view this excellent video presentation on the Word of Wisdom. This documentary zeros in on Joseph Smith’s revelations, his priorities that led to the revelation and the very important historical context of the revelation. All this can help us understand and follow the admonitions of this important revelation with its promises of health as well as “treasures of knowledge, even hidden treasures.” (D&C 89:19)

[i] “The Word of Wisdom,” The Joseph Smith Papers documentaties. BYUtv. 2011.

“Bio: Since 1981 I have taught at BYU. Before that I worked at the Universität Zürich and the Universität Tübingen. I was granted a Ph.D. from Brandeis University in ancient Near Eastern Studies. My M.A. and B.A. were granted by BYU. I am married to Joaquina V. Hoskisson, and we have four children.”

“Through our brief contact and working relationship, Ron Walker left a permanent impression on me. His influence can be felt in my own writing, in my desire to seek greater contextual understanding, and in my determination to treat the history of Mormonism with charity. I may never be as prolific, influential, or talented of a writer and researcher as he was, but working with him instilled within me a tremendous appreciation for the generation of scholars upon whose work we are now building. I tip my hat to Ron Walker and send a little prayer up to heaven assuring him that the torch he helped light is being passed onto a new generation of Mormon scholars.”

“Mark Lyman Staker is a Senior Researcher in the Church History Department of the LDS Church. He received his PhD in cultural anthropology from University of Florida. For more than fifteen years, Mark has been involved in historic sites restoration and nineteenth-century expressions of the Latter-day Saint experience. He received the J. Talmage Jones Award of Excellence for an Outstanding Article on Mormon History from the Mormon History Association, and he has been involved in numerous museum exhibits. He and his wife, Kimberly, are the parents of seven children and live in West Bountiful, Utah.”

“Alcohol consumption in Russia stays among the highest in the world. According to the WHO 2011 report, annual per capita consumption was about 15.76 litres, fourth highest volume in Europe. Another dangerous trait of Russian alcohol consumption pattern was high volume of spirits compared to other consumed alcohol drinks.”

‘List of countries by alcohol consumption per capita,” Wikipedia.org, Retrieved 9/26/2016.

“Russia has the largest gap between male and female life expectancy in the world, 14 years, and their deaths have out numbered their births by such a wide margin for such a long period of time they have a serious declining population problem. If you look at their leading causes of death you might think Poisoning is the problem, but that doesn’t even begin to tell the story. Russia’s poison problem is Alcohol. The World Health Organization estimates that just 40% of school age Russians will live to the Pension age of 55-60, if something isn’t done about the problem.”

RPMNote: You will see some variation in these expectancy numbers depending on the sample year or years and also statistical methods. However, it is amazing and dramatic to see the effects of alcohol use particularly translating almost in real time to terrible swings in these life expectancy numbers.

No mention in the Word of Wisdom revelation of a diet issue that would require dramatic societal change if widely implemented, to me does not indicate that the Lord is neutral on the subject. Thus, milk, eggs and fish, by all indications, remain as healthy, important regularly eaten staples of our diet as they have throughout history. Life expectancy and serious disease statistics by country do not paint a picture that these foods are unhealthy, that the sky will fall or we will all die or that these foods should be overthrown from their place in our diets.

“The most restrictive vegetarian diet, the vegan diet, that eliminates animal products, including eggs and dairy products, is not recommended in the Word of Wisdom nor endorsed by General Authorities. Current average life expectancy and heart disease data support the assertion that a diet that prohibits eating these animal products is not warranted.”

“Elder John A Widtsoe, a biologist by profession, wrote in his book entitled The Word of Wisdom: A Modern Interpretation that ‘The foods needed to supplement grains for a good diet are milk and eggs, fruits and vegetables.’ He added that ‘Fresh eggs and clean milk have the highest value’ for they contain the ten essential amino acids.” ‘An egg a day is highly desirable – especially for children.’”

Boyd K. Packer, “The Word of Wisdom: The Principle and the Promises,” April 1996 General Conference/

“Young people, learn to use moderation and common sense in matters of health and nutrition, and particularly in medication. Avoid being extreme or fanatical or becoming a faddist. For example, the Word of Wisdom counsels us to eat meat sparingly (see D&C 89:12). Lest someone become extreme, we are told in another revelation that ‘whoso forbiddeth to [eat meat] is not ordained of God” (D&C 49:18).’”

RPMNote: Some suggest that the scripture in section 49 really is a double negative that results in an endorsement of a meatless diet when the Lord said “whoso forbiddeth to abstain from meats.” Further in the verse, another clause clarifies these words, not supporting the double negative interpretation.

“And whoso forbiddeth to abstain from meats, that man should not eat the same, is not ordained of God;” (D&C 49:18) [emphasis added]

“RPMNote: It seems to me that this scripture becomes even more important as strongly promoting a vegan diet has become part of the politically correct animal rights movement. The aggressive tactics practiced by this movement, in my opinion, cross the line of coercion mentioned in this scripture. See also D&C 98:7 ‘whatsoever is more os less than this, cometh of evil.’”

Ronald P. Millett, “What does the Word of Wisdom Have to Say About Fish?” Meridian Magazine, August 23, 2016.

“Fish, a key symbol of Christianity, seems to be considered a staple of ancient and modern diets, as are wheat and other grains. Fish is therefore specifically described in the detailed logic of the Word of Wisdom as outside the scope of the discussion about using meat sparingly.”

“This amazing miracle, involving perhaps several years supply of fish for the four future apostles’ families certainly does not seem to be in the ‘use meat sparingly’ category of food. Rather, fish is a staple, regularly eaten food in the diets of these fishermen called to be fishers of men.”

“Along the frontiers, people relied heavily on meat as a staple in their diet because it was available and even plentiful, while crops might be scanty and uncertain. Meat was especially important in wintertime when other foods were less plentiful and when the cold weather helped preserve meat. People sometimes followed harmful dietary extremes because they had no accurate idea what they should eat. Thus, the Word of Wisdom was an island of truth in a sea of uncertainty.”

In regards to fn19, I'd just like to add, if God desired his people to be vegans, why would he promise us a land flowing with milk and honey?