Hubble Picture of Near Miss of Mars by Comet | Meridian Magazine 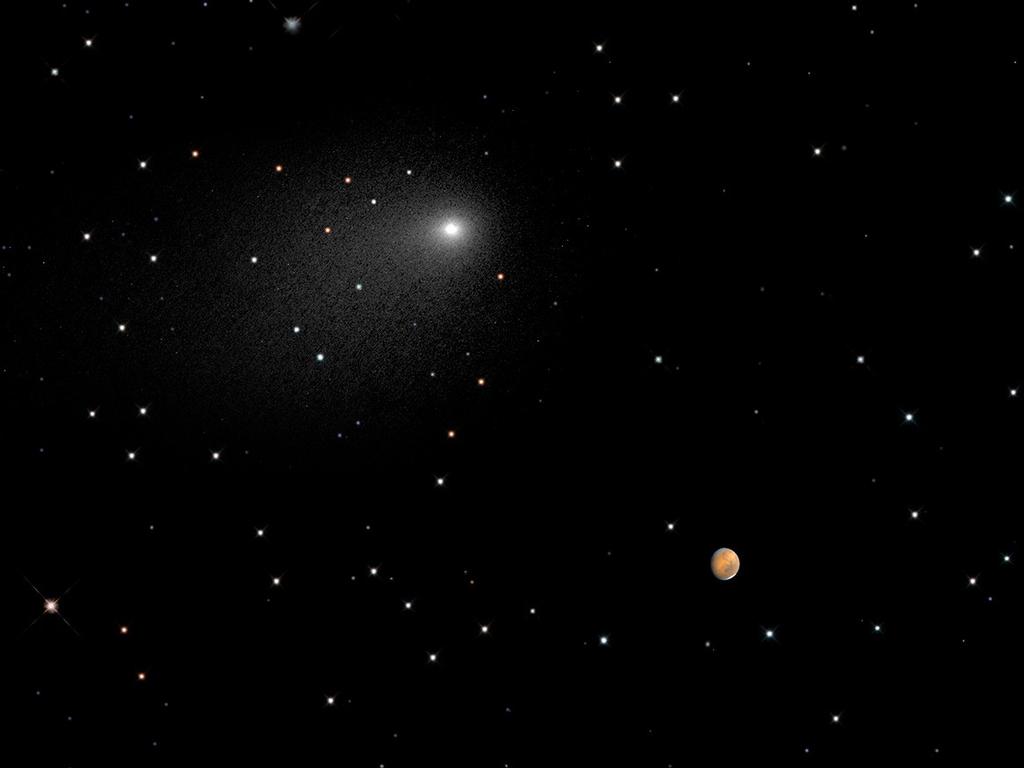 Hubble Picture of Near Miss of Mars by Comet

A month after Comet Siding Spring narrowly missed the planet Mars on October 19, 2014, further NASA pictures and illustrations now dramatize this once in a million years event.

The NASA press release explains that this is a composite picture that illustrates how closely the comet came to the planet Mars, about 87,000 miles.

“This composite NASA Hubble Space Telescope Image captures the positions of comet Siding Spring and Mars in a never-before-seen close passage of a comet by the Red Planet, which happened at 2:28 p.m. EDT October 19, 2014.”

“This is a composite image because a single exposure of the stellar background, comet Siding Spring, and Mars would be problematic. Mars actually is 10,000 times brighter than the comet, so it could not be properly exposed to show detail in the Red Planet. The comet and Mars also were moving with respect to each other and could not be imaged simultaneously in one exposure without one of the objects being motion blurred. Hubble had to be programmed to track on the comet and Mars separately in two different observations.

“NASA used its extensive fleet of science assets, particularly those orbiting and roving Mars, to image and study this once-in-a-lifetime comet flyby. In preparation for the comet flyby, NASA maneuvered its Mars Odyssey orbiter, Mars Reconnaissance Orbiter (MRO), and the newest member of the Mars fleet, Mars Atmosphere and Volatile Evolution (MAVEN), in order to reduce the risk of impact with high-velocity dust particles coming off the comet. Other NASA space observatories also joined Hubble in observing the encounter, along with ground-based telescopes on Earth.

“Siding Spring is the first comet from our solar system’s Oort Cloud to be studied up close. The Oort Cloud, well beyond the outer-most planets that surround our sun, is a spherical region of icy objects believed to be material left over from the formation of the solar system.”

Here is an illustration of the view from the Martian surface of the comet’s closest approach also published by NASA.