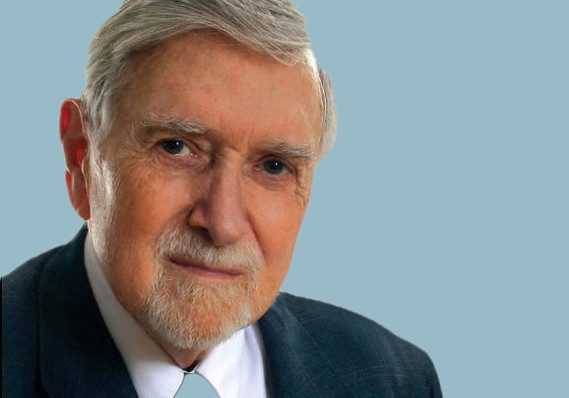 Best-selling author and financial advisor, Howard Ruff, passed away on Saturday, November 12, 2016, at age 85. Ruff is survived by his wife Kay, 13 of their 14 children (9 biological, 5 adopted), and their 79 grandchildren and 48 great-grandchildren.

Perhaps best known for his book, How to Prosper During the Coming Bad Years, an influential New York Times best seller that sold more than 3 million copies, Ruff also authored many other books on financial and political issues.  He predicted the rise of inflation in the mid-70’s and early 80’s, and was the original “Gold Bug” promoting investments in precious metals.  His famous quote, “It wasn’t raining when Noah built the ark,” encouraged many to be better prepared for the future.

Ruff founded one of the largest financial newsletters, The Ruff Times, with hundreds of thousands of subscribers. He had a gift for simplifying complex financial principles. As Ruff liked to say, he wrote for “Main Street” not “Wall Street.”

Ruff had his own syndicated TV show, Ruff Hou$e, where he interviewed influential figures such as Ronald Regan and George H.W. Bush. He was also a featured guest on hundreds of radio and television shows, including Good Morning America, The Today Show, Donahue, Regis and Kathy Lee, Crossfire, Nightline, Oprah, and more.

Ruff co-founded an influential political organization “Free the Eagle,” promoting free market policies and candidates. Through “Free the Eagle” he helped convince President Ronald Reagan to get Stinger missiles to the Afghan freedom fighters. This led to the eventual withdrawal of the Soviet Union from Afghanistan, which also led to the fall of the iron curtain.

Ruff started many successful companies. He was a self-made millionaire. Twice. He lost it all. Twice. He often said he learned more from his failures than from his successes. He wasn’t afraid to take risks and when he messed up he fessed up and made up. He liked to say, “I’ve been rich and I’ve been poor. Rich was better.”

Ruff was no stranger to hardship. His father died tragically when he was just 4 months old. He was raised by his mother who supported Ruff and his older brother, Jim, as a seamstress.

Although his main career was in the financial and political arena, Ruff was a gifted musician with a great passion for music.  He toured the world in the 50’s as a baritone soloist and announcer with the Air Force band and Singing Sergeants.  Later he was greatly privileged to be a guest soloist with the Mormon Tabernacle Choir, as well as the Philadelphia Orchestra and National Symphony. One of his most treasured accomplishments was recording his album Howard Ruff Sings in the early 80’s featuring the Osmond brothers and the BYU Philharmonic and A Capella Choir as backup. (You can listen to songs from his album at wwwHowardRuffLegacy.com)

A member of the Church of Jesus Christ of Latter-day Saints, Ruff came from pioneer stock. At age 18, he served a two-year mission for the LDS Church in the Eastern United States. He would often say, “I’m a practicing Mormon, and I’m going to keep practicing until I get it right!”

Ruff is known for his dry sense of humor and inexhaustible telling of stories, jokes, and one-liners, crediting the success of his marriage to the fact that “they were both in love with the same man.” He even asked his children to put “I told you I was sick” on his gravestone.

Of all his many accomplishments, Ruff cherished most his role as a husband, father, and grandfather. He adored Kay, his wife and partner of 61 years. In addition to their biological children, he and Kay had big hearts and an open-door policy, bringing dozens of teenagers into their home for days, weeks, months, or sometimes even years.

More information about Howard Ruff can be found at www.HowardRuffLegacy.com. Messages to the family and personal memories of Howard can be submitted through the website. Ruff was a strong supporter of Family Watch International (FWI) and Kay Ruff has requested that in lieu of flowers donations be made to FWI through the same website.