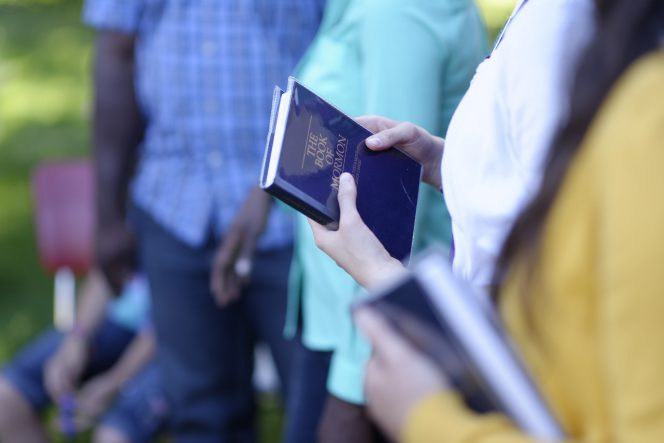 How the Book of Mormon Can Help us Gain, Retain, and (If Necessary) Regain Our Testimonies

For investigators first seeking a testimony, for Church members desiring to strengthen or maintain their conviction, and for those attacked by doubts who are struggling to know again, our invitation is the same: Read the Book of Mormon. As the Prophet Joseph Smith explained, “the Book of Mormon [is] the most correct of any book on earth, and the keystone of our religion, and a man would get nearer to God by abiding by its precepts, than by any other book” (Introduction to the Book of Mormon).

As long as I can remember, I have heard about the importance of reading the Book of Mormon in order to gain a testimony. During the years that Ezra Taft Benson was the president of the Church, there was no message more often repeated than that we should flood the earth with The Book of Mormon. This must have been instilled in me very well–and at an early age–because one year, deducing from his pipe smoking that he was not a member of the Church, my brother and I left Santa Claus a Book of Mormon along with the traditional cookies and milk!

The Keystone of our Religion

President Ezra Taft Benson explained this concept in these words: “Just as the arch crumbles if the keystone is removed, so does all the Church stand or fall with the truthfulness of the Book of Mormon. . . If it can be discredited, the Prophet Joseph Smith goes with it. So does our claim to priesthood keys, and revelation, and the restored church. But in like manner, if the Book of Mormon be true–and millions have now testified that they have the witness of the Spirit that it is indeed true–then one must accept the claims of the Restoration and all that accompanies it” (Ensign, Nov. 1986, 6).

“We invite all men everywhere to read the Book of Mormon, to ponder in their hearts the message it contains, and then to ask God, the Eternal Father, in the name of Christ if the book is true. Those who pursue this course and ask in faith will gain a testimony of its truth and divinity by the power of the Holy Ghost.

“Those who gain this divine witness from the Holy Spirit will also come to know by the same power that Jesus Christ is the Savior of the world, that Joseph Smith is his revelator and prophet in these last days, and that The Church of Jesus Christ of Latter-day Saints is the Lord’s kingdom once again established on the earth, preparatory to the second coming of the Messiah” (Introduction of the Book of Mormon).

As a result, “the Book of Mormon, combined with the Spirit, is [our] most powerful resource in missionary work” (Preach My Gospel, 104) and “the greatest single tool which God has given us to convert the world” (Benson, A Witness and a Warning, 11; Ensign, Nov. 1984, 7). As a missionary, I observed that every investigator that I ever had who was willing to sincerely read the Book of Mormon in good faith and pray about it with real intent always gained a testimony of it and they always joined the Church. That is the power of the Book of Mormon!

Although most Church members are aware of the role of the Book of Mormon in first gaining a testimony, many overlook its role in helping us to keep our testimony strong throughout our lives. One who understood its important role in maintaining our testimonies was President Marion G. Romney, a former counselor in the First Presidency. He once shared this experience from his life: “Years ago as I began to practice law, members of my family were a little uneasy. They were afraid I would lose my faith.

“I wanted to practice law, but I had an even greater desire to keep my testimony, and so I decided upon a little procedure which I recommend to you. For thirty minutes each morning before I began the day’s work I read from the Book of Mormon … and in just a few minutes a day I read the Book of Mormon through, every year, for nine years. I know that it kept me in harmony … with the Spirit of the Lord” (President Marion G. Romney: “All is holy where this man kneels,” Ensign, July 1988).

I had a similar experience while completing my PhD. There was a time when I was given leave from teaching seminary and institute classes and worked exclusively on my dissertation. Over time, I noticed something that surprised me. Because I was not as immersed in the scriptures as I was accustomed to, there was a weakening to my own spirituality and faith. As I pondered what I should do about this, I remembered the story of Marion G. Romney. I decided to study the Book of Mormon for at least 30 minutes every day and soon felt the power of conviction return.

As President Ezra Taft Benson has explained, “There is a power in the book which will begin to flow into your lives the moment you begin a serious study of the book. You will find greater power to resist temptation… You will find the power to stay on the straight and narrow path” (Ensign, Nov. 1986, 7).

One of my missionaries came to me some time ago. He was a fine missionary. I asked him, “Elder, how can I help you?”

“President,” he said, “I think I’m losing my testimony.”

I couldn’t believe it. I asked him how that could be possible.

“For the first time I have read some anti-Mormon literature,” he said. “I have some questions, and nobody will answer them for me. I am confused, and I think I am losing my testimony.”

I asked him what his questions were, and he told me. They were the standard anti-Church issues, but I wanted a little time to gather materials so I could provide meaningful answers. So we set up an appointment ten days later, at which time I told him I would answer every one of his questions. As he started to leave, I stopped him.

“Elder, you’ve asked me several questions here today,” I said. “Now I have one for you.”

“How long has it been since you read from the Book of Mormon?” I asked.

His eyes dropped. He looked at the floor for a while. Then he looked at me. “It’s been a long time, President,” he confessed.

“All right,” I said. “You have given me my assignment. It’s only fair that I give you yours. I want you to promise me that you will read in the Book of Mormon for at least one hour every day between now and our next appointment.” He agreed that he would do that.

Ten days later he returned to my office, and I was ready. I pulled out my papers to start answering his questions. But he stopped me.

“President,” he said, “that isn’t going to be necessary.” Then he explained, “I know that the Book of Mormon is true. I know Joseph Smith is a prophet of God.”

As this beautiful story shows, reading the Book of Mormon is central to not only gaining, but also regaining a testimony if we ever find our faith shaken or under attack. The reason for this was taught by President Ezra Taft Benson, who explained: “All objections [to the Church], whether they be on abortion, plural marriage, seventh-day worship, etc., basically hinge on whether Joseph Smith and his successors were and are prophets of God receiving divine revelation. . . . Therefore, the only problem the objector has to resolve for himself is whether the Book of Mormon is true. For if the Book of Mormon is true, then Jesus is the Christ, Joseph Smith was his prophet, The Church of Jesus Christ of Latter-day Saints is true, and it is being led today by a prophet receiving revelation. Our main task is to declare the gospel and do it effectively. We are not obligated to answer every objection. Every man eventually is backed up to the wall of faith, and there he must make his stand” (Benson, A Witness and a Warning, 4-5; see also Preach My Gospel, 109, italics added).

I conclude with the words of our beloved prophet, President Thomas S. Monson: “What will protect you from the sin and evil around you? I maintain that a strong testimony of our Savior and of His gospel will help see you through to safety. If you have not read the Book of Mormon, read it.” (Ensign, May 2011).

To learn more on this important subject, check out Mark A. Mathews’s book Open Your Mouth: What to Say When Sharing the Gospel.

Thank you for this wonderful article. It's exactly what I needed.