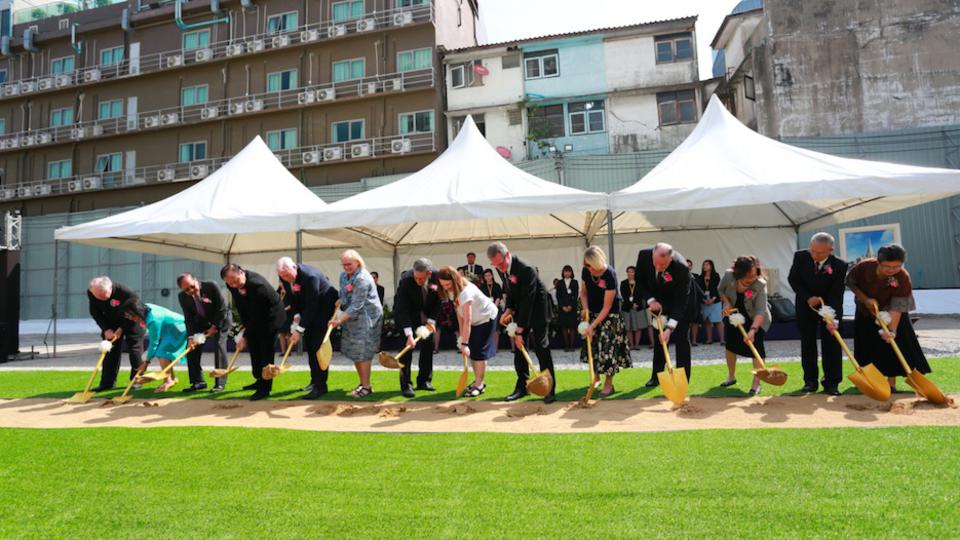 The Church of Jesus Christ of Latter-day Saints broke ground for its first temple in Thailand Saturday, January 26, 2019. Elder Robert C. Gay of the Presidency of the Seventy presided and, along with Church and local community leaders, participated in the ceremony with 700 members from the Church. Many others joined via broadcast in Church meetinghouses throughout the country.

The groundbreaking took place at the temple site on 1645/6 New Phetchaburi Road, Makkasan in the Ratchathewi District which is in the center of a residential and business area in Bangkok.

“My heart is filled with joy and gratitude to be here today,” Elder Gay said. “Because of the faithfulness of the saints in Thailand, a house of the Lord will soon be built in this country and many will have the opportunity to participate in temple worship with their family and partake of the eternal blessings that come with it.”

He was joined by Elder David F. Evans, President of the Asia Area, who also offered remarks and the dedicatory prayer. Other senior Church leaders included Elder Peter F. Meurs and Elder David P. Homer, members of the Asia Area Presidency, as well as Elder Wisit Khanakham who is an Area Seventy.

“Today was an historic day for the Church in Thailand,” Elder Evans said. “For more than 50 years, the faithful saints in Thailand have waited and prayed for this day. The construction and ultimate completion of the temple will become a blessing for not only the members of the Church, but also for all who see the beauty of the temple and feel of the peace that will be found on this sacred ground.”

Also in attendance were former Thailand Ambassador to the United States His Excellency Sakthip Krairikshand, his wife M.R. (Lady) Benchapa, former Mayor of Bangkok Dr. Bhichit Rattakul and other dignitaries.

The Church will build a majestic 44,405-square-foot, six-story temple with multiple spires reaching heavenward. It will be a place of beauty and peace where all can come.

In addition to the temple, a 91,370-square-foot building will feature two religious meetinghouses, seminary and institute facilities, Church offices and housing. Substantial underground parking is also planned at the site.

Temples are considered “houses of the Lord” where Christ’s teachings are reaffirmed through marriage and other ordinances that unite families for eternity. In the temple, Church members learn more about the purpose of life and strengthen their commitment to serve Jesus Christ and those around them.

Sister Wipharat Uanphoklang also offered remarks at the groundbreaking ceremony. She and her husband live faithfully as they raise their three sons in the gospel. Like many other Thai members of the Church, they look forward to receiving temple blessings in their own country.

“We have long prayed for a temple in Thailand,” Sister Uanphoklang said. “We are grateful that each of our children will have the blessing of receiving their temple ordinances and being sealed when they go on missions and marry. The temple gives us joy and hope as we seek to teach our children and help them feel of God’s love for them.”

Today, there are more than 22,000 Latter-day Saints in Thailand, organized in 42 congregations. This temple will serve Church members in Thailand and other nearby countries.

There are currently 201 temples throughout the world either in operation, under construction or announced.

Open house dates will be announced and public tours conducted after construction of the Bangkok Thailand Temple is completed. A date for dedication will also be announced.

When I first lived in Thailand during the Summer of 1984, there were only 7,000 members, and half of those could not be located. Growing to love the Thai people, I can't be happier for them! I never thought it would be possible for us to have a temple in Thailand. In this case, I am delighted to have been wrong.