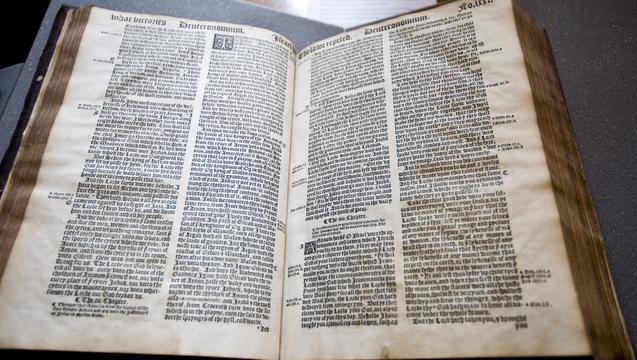 Scholars and faith leaders joined together on Saturday, 14 May 2011, for a symposium at the University of Oxford in England marking 400 years of the King James Version of the Bible.

The event, which was jointly organized by Harris Manchester College and The Church of Jesus Christ of Latter-day Saints, celebrated the impact of the Holy Bible on culture, religion and literature.

One of Britain’s leading theologians, Revd Professor Alister E. McGrath, described the background to the King James Bible and the process of translation: “They [the translators] had no sense that they were producing a translation that would dominate the English-speaking world for 300 years.”

“Making the text accessible seems to be the key theme of the translators,” McGrath said, quoting 17th century Oxford scholar Miles Smith, who said that producing the King James Version was “like rolling away the stone from a well, that all may drink.”

Literary expert Professor Jonathan Bate spoke about “the two pillars of English culture”: the “Authorized Version” of the Bible – commissioned by King James I – and the works of William Shakespeare. Professor Bate quipped, “The Authorized Version is the exception that proves the rule that no great literary work was written by a committee!”

Elder Kenneth Johnson, an emeritus member of the Seventy, shared his personal testimony of the Holy Bible. “It has transformed me as I’ve learned what it teaches,” he said. “The Bible bears witness of Jesus Christ as the Son of God. ..The book is a conduit to inspiration and revelation.”

The event also included tours of historic Bible exhibitions at Harris Manchester College and at Oxford University’s Bodleian Library. Symposium participants were able to see the only surviving copy of the forty 1602 Bishops’ Bibles used by the King James translators, which was marked with suggestions, deletions and alterations. Also on display was an early edition of the King James Bible, Martin Luther’s 1522 Bible and George Frideric Handel’s conducting copy of Messiah.