LDS Fiction: Oh, Say Can You See? By L.C. Lewis 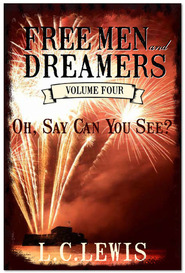 Among the perilous times the American Nation has faced, one of the greatest threats to the Constitution of the United States and to American liberty was the War of 1812.  In the fourth volume of Free Men and Dreamers, Oh, Say Can you See? L.C. Lewis continues the story of a nation under siege with the Capitol Building and the President’s House among the dozens of buildings in Washington D.C. burned by the British in their quest to humiliate the Americans and wrest control of the Mississippi River.  The country is in turmoil as the untrained volunteer militias more often run than stand to fight.

Jed Pearson, though sick, injured, and in chains is aboard a British ship en route to the dreaded Dartmoor  prison.  He has been charged with the cowardly act of firing on a white flag. Though innocent, under British law he must prove his innocence, even though those who could serve as witnesses are back in America where the law differs in that guilt, rather than innocence, must be proved.

Hannah is back at The Willows and expecting her first child.  All of the women and children sheltering there, with the help of the freed slaves, are struggling to rebuild the plantation which was burned by an enemy and to continue normal lives while worrying about their men who are fighting, prisoners, or wounded.

Abel and his son, Caleb, are freed slaves who join the Army where they suffer abuse as severe as they faced as slaves.  Still they take pride in serving their country and receiving a salary.  Abel is a huge, towering man, who brushes off the insults directed toward him by two bigoted, cruel soldiers until they whip young Caleb, his son and attempt to kill his wife.  Abel kills one of them in defending his wife and other innocent victims.  Those who love him attempt to cover for him since according to Maryland law at that time, a black person who killed a white person even in self defense, was to be hanged.

Markus O’Malley, the Willows foreman, is chosen to accompany Francis Scott Key on a mission to obtain the release of a doctor who is being held prisoner aboard a British ship.  The mission only partially succeeds and they are held prisoners on their own ship while the British launch an assault on Baltimore.  It is during that perilous situation where they are taunted and forced to watch the attack on the city where their loved ones live and can do nothing to protect or warn them, that Key writes the poem that eventually became a rallying anthem for the American people, then the National Anthem called the Star Spangled Banner.

There is to be one more volume in this series, so there are several sub plots that are left dangling, but this volume goes far toward enlightening the reader to the terrible injustices and backroom greed that launched the war.  It points up the legal inequities between races, nations, and genders, in spite of the constitution at that time.  It also highlights the terrible losses that occur when good people do nothing and when wealth, prestige, power, greed, or any other personal interest is placed before freedom.

Lewis’s ability to write a fast-paced, moving story with strong characters has grown greatly since her first volume.  The action is swift and it is easy to care about the characters as well as the towering story set forth.  Research is meticulous.  This book is a fascinating way to become better informed about a piece of our national past that bears strong similarities in some aspects to our current political scene.  There are sharp contrasts as well, not only in law, but in medical care, communication, and transportation of that day compared to current means.

Lewis lives in Maryland with her husband and that is where they raised their  four children. She is a popular historical speaker and workshop presenter with a deep love for LDS and American history. Being so close to Philadelphia, Washington D.C., and Baltimore she has grown up with a strong connection to America’s past.