Nearly eighty young single adults from wards in Northern Virginia donated their time this week to become a part of this year’s National Cherry Blossom Festival.  Crawling out of bed well before the sun made an appearance, the young adults joined more than 500 volunteers who assisted with the festival parade, a Japanese street festival, and a myriad of other related displays and activities in downtown Washington, D.C.  Clad in National Cherry Blossom Festival t-shirts, the volunteers assisted in giving directions and ushering visitors from around the world into their seats in the grandstands.  One enthusiastic church member even led the group in cheers. 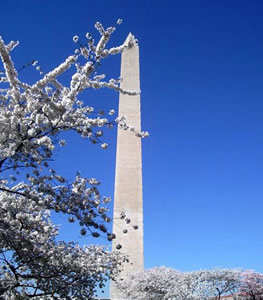 The Washington Monument was framed in cherries on Saturday for the festivities.

Sara Souther, the activities chairman of the Shenandoah Ward for young single adults, got the idea for volunteering after ward members attended the festival last year.  She wanted to plan a return engagement for this year, but when she went to the festival website she saw that volunteers were needed.  She signed up on behalf of her group, only to learn that she and her fellow ward members would be the only ushers at the event.  She knew it was time to call for reinforcements.

Bishop Don Tucker of the Shenandoah Ward suggested that the newly formed Union Mill single adult ward in Centreville could help.  Members of the Langley single adult ward also pitched in.  Now three wards strong, the ushers felt competent to help out wherever they were needed. 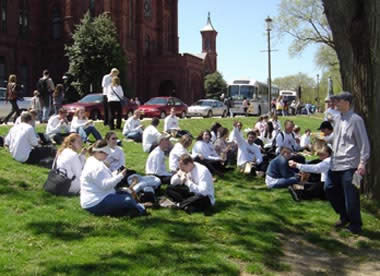 Young single adults relax in the shadow of a job well done.

From the very beginning, the young Saints made an impression.  Riding in a rented bus, they arrived at the grandstands promptly at 8 a.m. to be given their instructions.  As they sat in their seats, one of the parade organizers said, “I’ve never seen this before.  You guys are happy.  Last year our group showed up an hour late, they wouldn’t listen to their instructions, and they didn’t even travel as far as you did. You guys are amazing.” 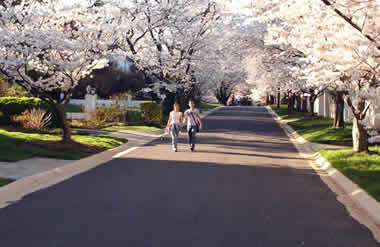 The nation’s capital is blanketed in cherry blossoms at this time of year.

But the parade organizers hadn’t seen anything yet.  Once the volunteers knew what to do, they did it with panache.  By 8:30 a.m., they were entertaining the people in the grandstands – people who had arrived many hours early and were enduring a long wait for the parade to begin.

Bishop Grant Worth of the Union Mill Ward said that at one point he was worried about crowd control because the parade-goers were so having so much fun.  Instead of sitting calmly in their seats – which is customary from parade-goers who are often elderly Japanese tourists -, Bishop Worth said the crowd was getting “riled up” by the LDS volunteers.  He was probably referring to Colleen Kinig, a volunteer from the McLean area who was running up and down Constitution Avenue encouraging the crowd to do “the wave” before the parade started. 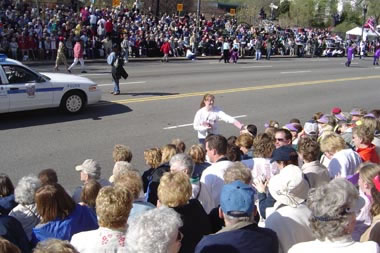 Colleen Kinig teaches sedate parade-goers how to do “the wave.”

Sara recalled,  “One of the parade staff members came up to me and said that he had never had volunteers so excited and had never seen the crowd – mainly senior citizens who arrived on tour buses – get up and do ‘the wave’ at 8:30 a.m.”

Meanwhile, Craig Field, also from McLean, was stationed in the VIP seating area for his ability to speak Japanese.  He was able to greet guests from Japan, including the International Diplomat of Japan.  Other languages that were spoken by the volunteers included Mandarin, Kreyol (Haitian), Espanol, German, French, Bulgarian, Portuguese, Thai, and American Sign Language. Some of those languages came in handy as the day progressed. 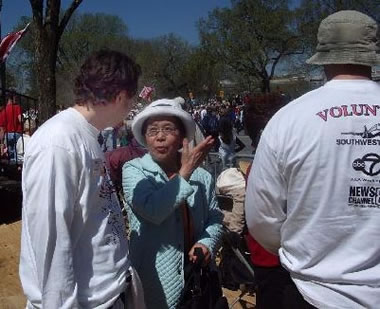 The LDS ushers did more than entertain, however.  They also helped tourists who needed help.  They could be seen helping visitors find their seats, locate the best places to eat and shop, and when necessary, seek medical attention.  The volunteers were excited about the opportunity to help, as well as the chance to represent the festival committee, their country, and their church.

Parade guests numbered 10,000 in grandstand seating alone, and there were 15,000 more guests than last year.  The Cherry Blossom Festival commemorates the gift of 3,000 cherry trees from the citizens of Tokyo to the citizens of Washington D.C. in 1912.  Today the parade features more than 100 entries and has a running time of two hours.  Some of the featured entertainment included character balloons, dance troupes, marching bands, and drum performances.  Parade participants came from Japan as well as from the United States. 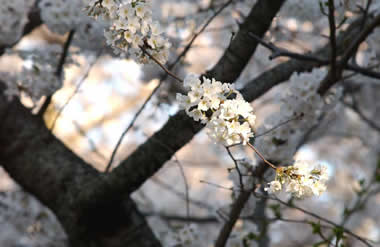 Sara spent the day wishing that she and her group would be invited back next year.  It didn’t take long before that wish was granted.  At the end of the day, the organizer asked Sara what her group was doing on April 8 . 2006.  “You have been the best volunteer ushers we have ever had,” she said, “and we would like you to return next year.”