Time for You to Defend Marriage (Before It’s Too Late) 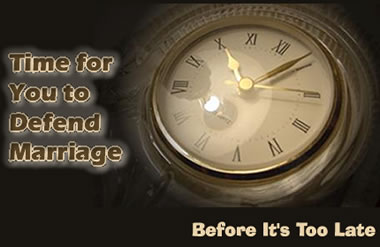 United Families International is sponsoring a World Congress of Families Meeting in Mesa, Arizona November 21 and 22 with keynote speaker Sean Hannity whose purpose is to launch a defend marriage campaign.  You are invited to attend. Saturday’s meeting which will be open to the public.  You can register for the event at www.unitedfamilies.org

If you would like to apply to attend Friday’s leadership conference, send an email to [email protected]  Please give us information about your interest in this cause and a paragraph or two about your leadership experience.

Columnist Dennis Prager writes, “Whatever your politics, you have to be oblivious to reality to deny that America today is torn by ideological divisions as deep as those of the Civil War era.  We are, in fact, in the midst of the Second American Civil War.”

This is, of course, a bloodless war.  No shots-but verbal-are fired.  Yet, what is at stake is the future of this nation and certainly whether marriage and family will continue as the centerpiece of American stability.  Generations from now, people will look back on this as the time when people either stepped forward to save marriage or let it be relegated to the dust bin of history.

Like a declining species, marriage is endangered, so much so, that President Bush declared this past week (Oct. 12-18) Marriage Protection Week. The need to protect it seems obvious.  Marriage has been society’s bulwark, its civilizing force, and every previous society has understood that.

Sociologist Amitai Etzioni has put it this way: “There never was a society throughout all of history . . . without a family as the central unit for launching the education of children, for character formation, and as the moral agent of society.” [i]

Anthropologist George Murdock’s exhaustive investigation into 250 human societies revealed this elementary conclusion: “The nuclear family is a universal human social grouping.No exception, at least, has come to light in the 250 representative cultures surveyed for the present study.”

It is, as they say, “elementary, my dear Watson.” Every civilization in history has the family at its foundation.

Not just a handful, but literally thousands of studies in the social sciences leave no doubt that marriage-a union between a husband and wife-provides the best possibility not only for the health, safety, and happiness of the partners but the nurturing and security of their children.  We have a landslide of evidence.

It would have to be a society that had some urge to self-destruction that would deliberately seek to undo its foundation and most important resource. Yet, that is where America finds itself.

In the name of same-sex “marriage,” many voices are advocating the single, greatest social experiment humanity has ever embarked upon. This social tinkering doesn’t merely redefine marriage, but undoes the world.

If same-sex “marriage” becomes the new law of the land, tomorrow’s children will grow up without traditional marriage as a norm or an ideal.  Imagine the confusion that will ensue, the experimentation, the fragmenting of identity.

And don’t think that marriage is so robust it can take this systematic unraveling.  It may be the source of a sturdy society, but it is also a fragile one.  The foundation of marriage has been worm-eaten by rampant individualism-a generation of me-first people who find it grueling to do the work of consistently thinking about the needs of another.

In some countries, marriage is already breathing its last.  Gary Neeleman, who syndicates magazines and news stories internationally, took a copy of Brides magazine to Lithuania to market its features.  He got a hearty snort in reply.  “Nobody gets married here.”

As columnist Rebecca Hagelin notes, “If the composition of marriage were changed, in just one or two generations the landscape of America would be irrevocably altered, affecting not just the family, but every other institution as well. If you weaken the foundation upon which a society is built, the result is a weaker society that will eventually crumble.”

Already, prominent voices are going on the record to brush marriage back as if it were only the retreat of the religious or blind traditionalist. President Bush’s proclamation on Marriage Protection was met by Democrat National Committee Chairman Terry McAuliffe’s calling the act a “desperate move to attract the right-wing base of his party.”  He called the idea of a Federal Marriage Amendment “anti-gay” and those who would support marriage “ultra-conservative.”

Do you know why these organizations were labeled “right-wing?”  It is because those who manipulate words are trying to isolate them and their influence-as if they are to be dismissed.  Truth is, the vast, silent majority of our country supports and understands how vital marriage is.  Yet they can also be swayed and pounded into a different shape by enough propaganda from those who would skewer marriage.

We have to speak up-and we have to do it now.

At Meridian, we have received many letters pleading with us to give ideas and direction on what can be done to support marriage.  Now we want to share an idea that can include all of us.  It is time to stand up for marriage.

You want to build a bridge to the future that your children can safely traverse over the multiple chasms of pain that are possible in an eroding society?  You care for them now, by considering their future and standing up for marriage.

This is the time not just to defend marriage, but celebrate it, letting our friends and neighbors and the media in our area know how critical it is to the health of our children and communities.

To learn how to do this effectively, United Families is sponsoring a regional World Congress of Families meeting in Mesa, Arizona on November 21 and 22, 2003.  You are invited to come.  Dinner on Friday night includes the CAMIE awards, given to those films that display both excellence and character and morality in entertainment.

Saturday’s program features addresses from keynoter Sean Hannity, as well as talks from Richard Wilkins, Allan Carlson, and many others who have been on the frontlines of this effort.  It’s a chance to rally with those, like you, who think the family must be supported and maintained, who want to cry out systematically and intelligently in a grass-roots effort for marriage before it is too late.

To learn more about this conference and to register come to www.unitedfamilies.org

Friday, November 21, is a special leadership session.  Here strategies will be laid out on how to support the family as well as practical training given about how to form a grassroots movement in your area.  United Families is looking to build organizations in every state of the union, as well as countries abroad, to form a broad voice for family.  We’d like to invite you to come to this meeting, and since our numbers are limited, we would invite you to submit an application to come.  This application need only be an email written to [email protected] It should include a brief bio, on you as well as an explanation on why you’d like to come to the conference.  Describe any leadership opportunities you have had in the community.

If you have names of people that you think would be key in helping United Families truly become networked throughout the nation, please feel free to include these in your email.  We look forward to hearing from you.

If you cannot come to the Arizona meeting, but are interested in this cause, please email your contact information to us, indicating your interest in being part of this vital issue.

In addition to United Families International, this World Congress of Families event  is being sponsored by Danny and Michelle Ainge, American Mothers,  The Howard Center for Religion, Family and Society, the Family Action Council International and many other groups. 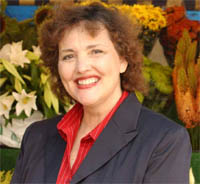 After receiving her education from University of Utah and Harvard, Maurine Jensen Proctor, the Editor-in-Chief and co-founder of Meridian Magazine, began her writing career with McGraw Hill Magazines and the Chicago Sun-Times. She has created award-winning television documentaries, has written a radio show for more than six years that played on 300 radio stations, and was a long-time writer of The Spoken Word for the Mormon Tabernacle Choir.

She, and her husband, Scot, have written several books together, including Witness of the Light, Source of the Light, Light from the Dust and The Gathering. They also edited a new version of Lucy Mack Smith’s biography of her son called The Revised and Enhanced History of Joseph Smith by His Mother and The Autobiography of Parley P. Pratt. They were formerly the editors of This People magazine.

Maurine has been a part-time Institute teacher for the past 13 years and is the mother of eleven children and grandmother of two with one on the way.

For more information on what you can do to help defend marriage, go to www.unitedfamilies.org