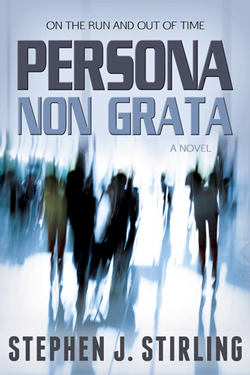 Persona Non Grata by Stephen J. Stirling is not your usual international suspense story and Paladin Smith isn’t the stuff TV heroes are made of, even though his parents named him after an old TV western star. Remember “Have gun, will travel?” He’s no “quick draw,” he doesn’t even carry a gun. He does have a quick tongue however and possesses a quality most of us lack; the ability to think fast and have the appropriate comeback when needed. He’s a school teacher, teaches early morning seminary on the side, and is a happily married man. Trouble arrives in the form of a congressman, the uncle of one of his former students, who caused trouble for him before by putting his political career ahead of his niece’s welfare.

Though the author wrote this story five years ago, it has a lot of similarities to the trouble with Russia and Ukraine today. Paladin is sent to Crimea to bring the congressman’s niece, Victoria Grant back to America. He arrives to discover she’s happy with her work as an assistant to the American ambassador and has no intention of leaving. She’s a beautiful, intelligent young woman, but naive concerning the motivations of those around her and Paladin has his work cut out for him as he attempts to persuade her to leave amid the pending crisis facing the country.

The ambassador has his own agenda which doesn’t include loyalty to his country or to his staff, but only to his own financial gain. A powder keg is brewing as the ambassador, the prince, the military, the Prime Minister, and the Archbishop work toward differing objectives. Conspiracy, lies, corruption, and historic loyalties play a part with little thought given to the freedom and self direction of the people. When the ambassador suspects Paladin might mess up his conspiracy, he has him declared persona non grata by the prince, leaving Paladin without diplomatic protection.

The action is fast and gripping in this story, though slightly unrealistic at times. Some of the secondary characters are not as strong or mean as I suspect they would be in real life. Paladin is larger than life as a modern knight who thinks fast and depends on the Spirit to get him through sticky situations. He’s reminiscent of the fantasy heroes so popular today. He lives a quiet, ordinary life, then when danger threatens, he’s suddenly stronger, braver, and smarter than anyone else, a hero who wins at all costs. He’s a one man army and a super missionary rolled into one. Instead of being corny, it all works, making the book fun and exciting.

Stephen J. Stirling was born in California, graduated from Brigham Young University, served a mission in Chile, then spent varying amounts of time traveling and living in Chicago and California. He spent the last twenty years teaching seminary in Arizona. He and his wife are the parents of five children.