Assault on Cambriol by Jerry Borrowman 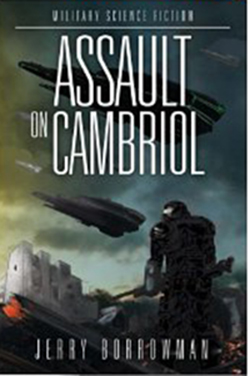 Jerry Borrowman is another author who is branching out into a new genre. Jumping from a solid reputation as an historical novelist, with Assault on Cambriol he plunges into the distant future and his first science fiction novel.

Captain Pietr Jesik lives on the planet Kalendon, but spends almost all of his time on a massive military star ship. He is particularly close to his young navigator, Kevin Wight, the son of a woman he once loved, but was forced to break up with because of their differing social classes. He and his crew capture two brash young lieutenants who just pulled off a dangerous stunt, but release them when Jesik realizes they and their tiny craft are the only ones who can warn the authorities on Kalendon of an approaching catastrophic disaster. The two young men, Travis Eaves and Sean Magill, discover a way to avert the disaster and save the lives of millions of people on the planet as well as Jesik and his crew. The two and Jesik become national heroes, much to the displeasure of an officer who hates Jesik because the woman he once wished to marry turned him down in favor of Jesik.

A small planet that produces the fuel vital to many planets including Kalendon asks for help from the two major planets in its quadrant of the universe, Kalendon and Alturus, to quell a rebellion. The people of these two planets and the small planet, Keswick, all descended from the same group of settlers who left earth together hundreds of years ago. The two large planets fought a prolonged war over their forms of government, then for the past two hundred years have had no contact with each other. Jesik, who has added Eaves and Magill to his crew, heads the expedition from Kalendon.

The battle over Keswick takes place both above and on the surface of the planet and leads to deaths, serious injuries, new alliances, a great deal of self discovery, new directions and the resolutions of old questions.

There are many battle scenes and a great deal of space is given to strategy and calculations. The author also devotes a large amount of attention to social organization of his three planets’ populations. Kalendon is slightly democratic, but the people are divided into three social classes with the lower classes having few opportunities for education or advancement. Alturus is a monarchy and is more efficient, but still maintains a class structure. Keswick has been a monarchy, but has been overrun by rebels determined to eliminate class distinctions.

The characters are generally likable, but are a little stereotypical. The politically correct elements of the plot tend to make it somewhat predictable. This novel will appeal more to science fiction fans than to the general public who may be discouraged by the wordiness of futuristic explanations.

Jerry Borrowman is a best-selling author of historical fiction and co-authored biography.

His Three Against Hitler with Rudi Wobbe is a George Washington National Award Winner. His historical fiction concerning World War I and World War II provide insight into the great European wars of the 20th Century. He was born and raised in Southeastern Idaho, but currently makes his home with his wife in Sandy, Utah.