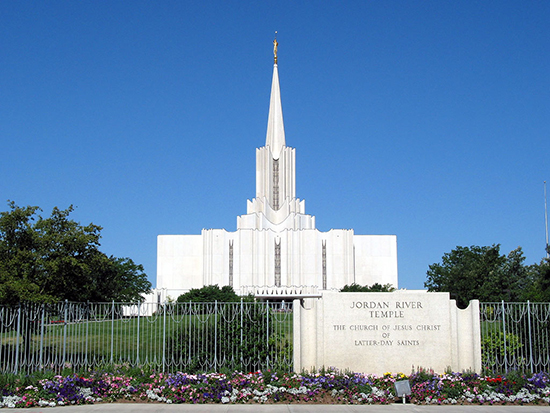 I woke up this morning on the anniversary of my marriage to my wife Laurie. At this time nineteen years ago, she was on her way to my house so we could drive north to the Jordan River Temple together. But she got behind a house and had to drive re-e-e-e-aly slo-o-o-o-w. Then she detoured off of State Street onto country roads and found herself behind a slow tractor. This is about as likely to happen as “My dog ate my homework!” But it happened. We got married anyway.

We’d met in the theatre. On the night she returned from her mission in the Netherlands, she came to watch her little sister Janae rehearse for a production of “Sweeney Todd.” I played Sweeney Todd, “the demon barber of Fleet Street,” who routinely… (I was going to detail his crimes, but they’re pretty gruesome for a family magazine). We got married anyway.

Not too long after that rehearsal, she was playing a principal role in “Li’l Abner” at Sundance Summer Theatre. I was in the band, playing banjo, guitar, harmonica, and, whenever the buxom Stupifyin’ Jones struck a provocative pose, the vibra-slap. Laurie played General Bullmoose’s ditzy girlfriend named Appassionata Von Climax. (I was going to omit this character name, but hey, Li’l Abner was a comic strip that appeared in many Sabbath newspapers.) We got married anyway. In the temple even, you will remember.

A somewhat precipitant development occurred in this relationship as described twice before in the world of Backstage Graffiti. But because I trust that patience is among the virtues held by all who are of sufficiently high moral caliber to be drawn to this column, I will tell the story again.

(But first I have to tell you about the flooding in Alpine, on account of the fire that cleared all the mud-stopping foliage off the mountain a year ago and the three-quarters of an inch of rain that fell in fifteen minutes less than twenty-four hours ago. The is the same storm that delayed the BYU-Texas game by two hours last night ((the game in which BYU won after losing to the Longhorns for a quarter of a century. That 25-year-old victory was the only BYU football game in the modern era that I’ve actually attended in person. My little son Joshua and I watched as in the opening offensive play Sean Covey executed some sleight-of-hand in the backfield that faked out the whole Texas defense and left my bishop about forty yards out, all alone, to catch his first touchdown pass as a BYU player. I reminded Bishop Bryce Doman of this event this morning at church and he said that he considered that having me there was the most memorable thing about that game. In retrospect. He’s a good bishop.)) People rode canoes in it ((not in the BYU-Texas game (((either of them))) but in the flood)). You and I are dangling our toes in this very wet place ((figuratively, but it sounds fun)) because it was spectacular, and also because I’m listening right now to a 26-minute recorded thunderstorm on headphones so this column won’t include lines from the Narnia movie my kids are watching downstairs.)

Twenty years ago my wife (who was, at the time, not my wife, but someone I admired pure and chaste from afar) was helping to direct a production of “Arsenic And Old Lace.” She called and asked me if I would audition, and since she was lovely and I was entirely bowled over that here she was on my poor unworthy telephone, I did. In a trice. I wound up playing the Boris Karloff role. (This was the killer who travelled with his own amateur plastic surgeon so he could get a new face every time the cops got close.) You may remember that one of the characters in this play thinks he’s Teddy Roosevelt, and carries around a biography of the dead president. About three weeks into rehearsals, as props began showing up, my offstage attention was drawn to a curious and rare book on the prop table, one that had been chosen to represent the Roosevelt biography. It was a book I’d only seen in my parents’ home, the journal of Pioneer John Brown (who has been a guest in this column). I was amazed–it had been printed and distributed only to John Brown’s descendants and a few scholarly libraries. At a break in the rehearsal, I held it up and hollered, “Hey, where did this book come from?’ Laurie answered, Oh, that’s my great-great-great-grandfather.” (She didn’t mean the book, she meant the writer of the book, but I knew what she meant-and now you do too.) Whereupon I said, “But hey, this is my great-great-grandfather!”

That vision kind of ratcheted our relationship up into a world of considerations that resulted in what we are now, which is married. Our children are still under observation.

So we got to the Jordan River Temple only a little bit late and then this happened:

“At the temple we sat opposite the Recorder, who prepared us thoroughly to have our marriage sealed. Then it occurred to me to mention to him that we weren’t married, so we started over. It was during…”

(iTunes just switched from thunderstorm to birds, but we will not be led on an avian tangent. Nothing dramatic has happened recently in Alpine involving birds, unless you want to count the merry gathering of the town buzzards ((we have a bunch, or, well, I guess, a “flock” that are old and respected citizens of Alpine)) around a certain deer carcass by the road on the way home from church last Sunday, but, oh, let’s not go there, okay?

“It was during this meeting with the Recorder that my son Sam became my best man, because my 90-year-old dad had been allowed to slip through unnoticed, and as a witness he had to be located by someone who could recognize him. I hadn’t realized that in the temple this is among the responsibilities of a best man.

“New brides are assigned a special experienced motherly escort who can imbue the nervous young woman with a feeling of confidence and security. Except for this one, who admitted later that she hadn’t done this particular service for a long time. We think maybe not since pre-earth life-she seemed to be working under the influence of a veil of forgetfulness.

“After pinning onto and removing from Laurie several erroneous traffic tags, sending her richly mixed signals having to do with dressing, while distractedly squishing the sack containing the veil-wreath of three-dollar-apiece dried flowers, and then delivering us to the sealing room without having been through the veil (which we did afterward and all hoped it was okay), she came into the sealing room intending to guide all the happy celebrants out again into the world before Laurie and I had actually been married.

“All through this odyssey she played out a marvelous comedy of putting us on elevators and leaving parents behind, pushing the down button when she meant us to go up, and leaving us in mysterious places and cliff-hangy situations (Perfectly-timed clap of thunder from iTunes!) while she disappeared either to consult the manual or to get genuinely lost herself. But she was nice-nice as she could be. Bless her heart.

“Among the workers competence may have been selective, but simplicity, benevolence, and good humor were universal. After the ceremony, as I emerged from my locker stall dressed in a tuxedo for pictures outside with the bride, one old white-haired brother sitting by the name desk asked Are we supposed to whistle now?’

“The sealing was performed by a sunburned old ex-stake president named Howard Barben who mangled ordinary syntax but alluded aptly and elegantly to the noble’ passage in Shakespeare’s The Rape of Lucrece.’ (This was after quoting, in entirety, the lyric to Sweethearts On Parade.’) Somehow, it all worked.

“He gave us excellent counsel… My only complaint about his good service was that he wouldn’t let me look at Laurie over the altar as the covenants were established. He had given us a distinctive visual cure for when each of us was to say Yes’ (him looking suddenly heavenward) and he didn’t want us to miss it.”

“We got to Brian Head (ski town in Southern Utah by Cedar Breaks, which is a magical place we love) after closing time and found the key in an envelope by the door. It broke in the lock when we tried it, but twisting the remnant in the lock with my Leatherman pliers got us in…”

“We knew that my teen-aged daughter Eliza (who fell in love with Laurie before I did) was present and at work when guests began showing up in the reception line wearing red wax lips. There were flowers everywhere, including the large spray that my tiny grand-niece Ilana talked someone into lashing to her head.

“We had elaborate and varied music, from my son Joshua’s classical guitar to his jazz jam with my new father-in-law Dave Koralewski, through to all my boys playing the blues. This was all during the breaks in Tom and Gael Shults’ magical Celtic music, to which bridesmaids, guests, and children danced in fairy rings around the trees.”

Well, it just got better from there-for nineteen years today. Thanks for celebrating our anniversary with me-or maybe for allowing me to celebrate it right in front of you. Marriage is a very good thing, a gift to us from God. Later we’re celebrating by having popcorn with the kids. We’ll save you some.

Marvin & Laurie, Congratulations! We read your yarn with much laughter and a few tears at appropriate interludes. Having been Temple Workers for six years in the Sacramento Temple we could relate very well to your wedding day adventure. We hope above hope---we don't think we---we don't remember doing anything quite like your sweet little guide and sealer. Lili just inserted that she remembers Laurie before she was born. I remember being personally wowed by her reading ability at about three years old. Marvin, I always remember your poetry and your music. Thanks. Dean

Congratulations! What a fun read. Your wedding day ranks right up there with ours, but I've never been able to write up such an amusing account. We've made it for 58 years now, so you young squirts hang on... it's a wonderful ride. Hi to Dave and JaNae, and our very best to you and Laurie. Carol Winkler