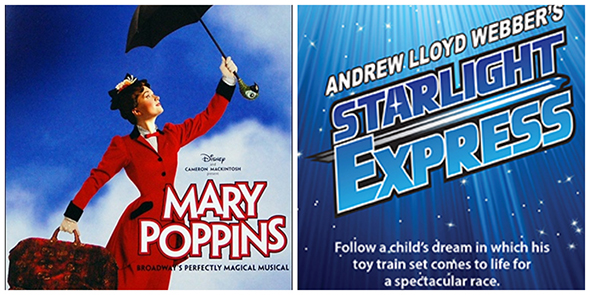 I’ve said it before and I’ll say it again: Tuacahn Ampitheatre, near Saint George, UT, is one of the most exotic and memorable theatre venues in the world. Nestled against towering red rock cliffs, with sunsets often occurring during the first act, there is simply no other place like it. Add to that the quality of the productions, which are near Broadway-level in many cases (actors come from around the world to perform here), and the plays are always worth the trip. 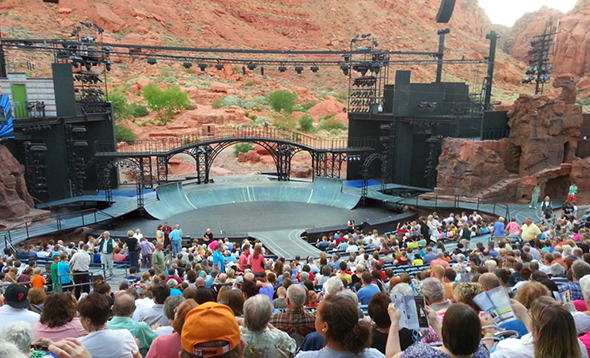 This summer’s offerings are the stage version of Disney’s Mary Poppins and the roller-derby-esque Andrew Lloyd Webber musical Starlight Express (Thoroughly Modern Millie and Disney’s Mulan are coming later in the season). 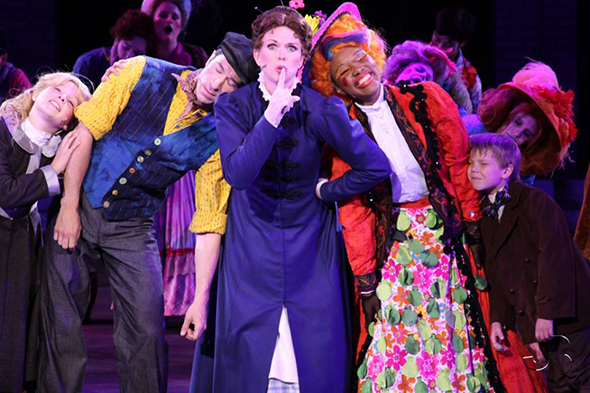 Mary Poppins is an energetic adaptation featuring wonderful vocalists, impressive magical illusions, and some truly phenomenal dance numbers (“Steppin’ Time” and “Supercalifragilisticexpialidocious,” in particular, are real show-stoppers). I lost my Playbill so I can’t mention the actors by name, sadly, but Mary Poppins was perfectly cast. In fact, every actor was superb. Although some changes have been made for the stage (no visit to an animated wonderland, alas) and there are some slow patches (which was also true in the film), the charm and cheek of the story are undeniable. This version actually improves on the characters of Mr. and Mrs. Banks, who were broad caricatures in the film but surprisingly well-rounded here. The character arcs the entire Banks family here are deeply, and surprisingly moving, and the play’s take home message will resonate deeply with audiences.

Starlight Express is by Andrew Lloyd Webber, of Phantom of the Opera and Joseph and the Amazing Technicolor Dreamcoat fame. The play, about a train-set in a boy’s bedroom come to life, is not Webber’s best work. The story (an old-fashioned steam engine races against diesel and electric trains) is riddled with clichs seen in countless other underdog stories. What’s more, actors in train costumes wearing roller skates is hard to take seriously (Toy Story better managed the gravitas that eludes this tale).

The play is absolutely saved, however, by the strength of its music, the physicality of its roller-derby action (if you sit close enough you’re literally in the middle of it as the actors skate around you), the committed energy of the cast, and the nonstop inventiveness of the wardrobe and production design. As with last year’s Aladdin, 3D effects are used to memorable effect. This is a play that I might not have enjoyed elsewhere, but Tuacahn pulls it off as a grand, fast-paced spectacle. There is always something original, flamboyant, and creative happening, and for that reason kids may very well love it (the handful of veiled innuendos will go over their heads). By the rousing, Gospel-flavored final song, the entire audience was clapping, stomping, and grinning. Though not especially substantial, Starlight Express works for a fun night at the theatre.

To learn more about Tuacahn, and to reserve tickets for their shows, please visit www.tuacahn.org. The shows alternate from night to night and run Mon-Saturday.

Jonathan Decker is a licensed marriage and family therapist (LMFT) specializing in couples’ therapy, family counseling, grief and bereavement, singles’ guidance, stepfamily formation, dating and remarriage after divorce or death of a spouse, and premarital counseling. He lives with his wife and children in St. George, Utah. For more information, or to schedule an appointment, please visit www.jdeckertherapy.com

Jonathan also writes Hollywood movie reviews from a Latter-day Saint perspective at www.mormonmovieguy.com. His book, 250 Great Movies for Latter-day Families, is now available for pre-order at a discounted rate on Amazon. 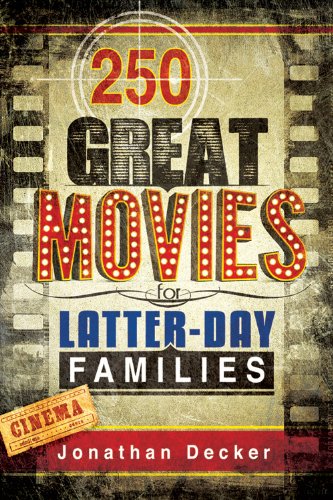 We saw Starlight Express in London when it was first performed. The tracks went all around us. It was exciting & delightful. When it was performed in Seattle, years later, it did not have the same pzazz. It was disappointing after having seen the real thing.

I saw "Starlight Express" in London quite a few years ago and loved it. I think any cliches it might be riddled with come from the original--it is the story of "The Little Engine That Could." Did you never read that as a child, Mr. Decker?