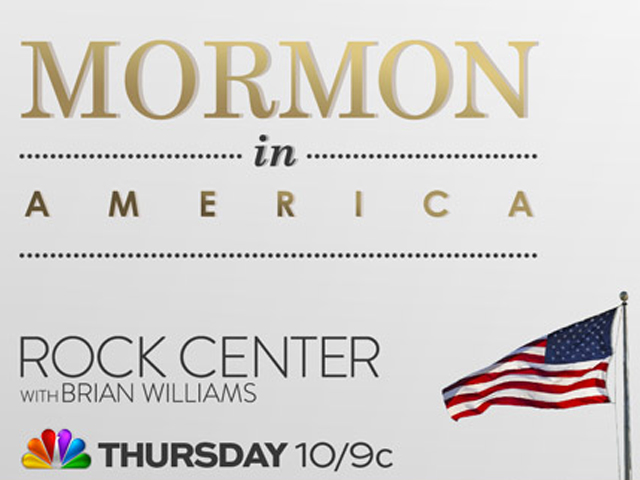 Mitt Romney has chosen not to talk much about his religion in his stumping for president, but no worries, the media wants it to be a topic, and to that end, with or without him, journalists are going to drag it on to center stage, claiming that he’s beginning to open up on the topic.

No mysteries here.  If Mitt talks about his experience as a bishop helping the poor in his ward, the next question will be about so-called racism, or gender inequality or any of the other funhouse mirrors through which the media choose to view the Church. Sacred garments become “magic underwear” through the eyes of the media and no matter how much Mitt wants to stay on message about fixing the economy, his Mormonism will take the starring role.

Thus, just days before the Republican National Convention, Rock Center with Brian Williams became the first network television show to feature a prime time hour on what it means to be Mormon in America. How did they do?  There were hits and misses, but at least, when active Latter-day Saints were allowed to speak about their faith, they did well, expressing deep devotion and commitment that was impressive.

It also seems that nobody at NBC set out purposely to do a hatchet job.  Viewers would come away from the program with these ideas:  Mormons are great at business.  Mormons are devoted to their faith.  Mormons are generous to the needy.  Mormons love their families.

At the same time, viewers would also assume that men and women are not equal in the Church, that the Church is secretive, that the Church hampers individuality and growth, that members of the Church are cookie-cutter conformists.  And most would have little idea about why Latter-day Saints are so committed to their faith.

Here’s what we thought were the hits and misses in a program that was generally positive.

? David Neeleman and Jeff Benedict talked about why so many Mormons are successful in business.  Both emphasized the key role a mission played as “a fast track to seriousness.”

David Neeleman said that two years away from home trying to convince a skeptical world about the value of your faith turns out to be humbling and rewarding.  He attributes much of his success as the founder of Jet Blue and now the fastest-growing airline in Brazil, Azul, to his faith, the kind of pioneer spirit he learned as a youth, “Put your shoulder to the wheel, push along.”

Jeff Benedict said that Mormon CEOs are groomed for the boardroom from an early age, and the biggest influence in their lives is their Mom.

? The show highlighted only one LDS family, and they chose well with Al and Julene Jackson of Lehi, Utah.  Since he is an African American and she is white, they were, the program noted, “an unlikely combination” and Al’s mother was surprised to hear he was dating a Mormon girl.  Yet he learned the gospel and was converted. When the reporter asked her if she felt like she was missing out on a lot living a strict code of conduct she said, “I don’t see it as a uniformity code.  I want to live this way.  I’m not doing anything that I don’t want to do.”

The camera shows the family studying scriptures together, attending Church, and then the reporter explores whether it is hard to raise kids in a secular culture that assaults their religious values.  Their daughter said that a lot of people say that your parents must make you do this, but she has chosen this way for herself.  Julene said you lay the foundation of the gospel for your children, but ultimately they have to go out into the world and see for themselves what matters.  The reporter asked what if her children made a mistake?  She answered, “That’s the beautiful part of the gospel.  The atonement is real.  You can be forgiven.”

Al Jackson, who has been a bishop, was asked what it was like to be the only black face in his congregation and if he’d ever experienced any discrimination.  He said never.

? The reporter was simply astonished by welfare square and the bishop’s storehouse, calling it “a showpiece of Mormon generosity.”  The camera caught the gleaming floors, the goods stacked to the ceiling that go on and on in what looks like nearly an endless warehouse. “All a needy Mormon needs to do is ask,” he said.  This is a significant safety net.  In addition there are 327 employment offices around the world.  “Mormons really do believe they are their brother’s keeper.”  “This is mind boggling,” the reporter noted.

He noted that volunteers who work at the “store” where people come to get groceries go out of their way to make sure there is no stigma attached to needing help.  He interviewed one woman getting groceries who said, “If I fall, there’s someone there to help.”

Visiting welfare square where LDS volunteers were busy working, he was interested that the woman in a hairnet was getting a Ph.D.

?   In the limited time of an hour with the complex task of trying to capture what it means to be a Mormon, producers had to carefully choose who they talked to and highlighted. Yet, of course, there was the almost requisite interviews with a series of people who felt marginalized in the faith for one reason or another.  This means putting fewer active Mormons on screen and letting them say why all this matters so much to them.

A reporter and camera crew spent three days with Julene and Al Jackson, for example, and they said they were both pleased and a bit disappointed about the outcome because said Julene, “we know what they saw and what they could have highlighted.”  She felt the program was superficial in the way they handled them.  They felt that there was way too much focus on those who felt disenfranchised on some level.

? Abby Huntsman, daughter of Jon Huntsman Jr., and the only one of 60 grandchildren in her family to leave and marry outside of the Church, told how she left the Church because of her bishop.  His offense?  He asked her to come and talk to him because she was dating outside of the faith, and she said, that she was so offended she left and didn’t come back. (Oh those oppressive bishops.).

She said, that no one was going to tell her whom to fall in love with and decided, “I’m not going to live in this bubble anymore.” One of the people we watched the program with said, “Why didn’t they interview one of the other 60?”

It was strange, then, that in the program, she became the spokesperson about the temple.  On a topic as important to Latter-day Saints as the temple, the interviewers, asked her opinion, rather than getting information about what the temple is and what it means from someone who could speak with experience.  The reporter asked Abby if it the requirements for entering the temple will ever change so that everyone can enter, instead of only those who have qualified through their obedience and commitment.  She said, “I hope it does. I don’t think it will.”  Again an unspoken assumption on the part of both the interviewer and Abby that this essential doctrine  would evolve as the Church was pushed to enter the mainstream.

At that point the program went on to point out how parents who are not members cannot accompany their Mormon children into the temple for their weddings, including Ann Romney’s parents on their wedding day.

The message was that the temple was secretive and exclusionary, and Abby said how much being “more accepting was very much needed in the Church today.”

? The program showed a picture of the temple garments instead of respecting how sacred these are to Latter-day Saints.  They also showed several pictures of Mitt Romney pointing out that you can see the lines of the garments beneath his white shirts.  The commentary on what the garments are was again by Abby Huntsman who doesn’t wear them.

? The show stated without debate or moderation that the LDS church is a place where the two genders are not equal.  No one who saw it differently was given any air time.  Joanna Brooks, who is active but openly critical of the Church in her blog and writings, said how important it is to her that men and women are equal in the sight of God. (Wow, we never thought of that.)  The implication was that this was surprising and that the Church teachings and practices did not reflect that.  End of issue. No other viewpoint on the topic.

? The show simply skipped the most foundational idea of the gospel-that when Joseph Smith went into the grove he saw God, the Father and his Son, Jesus Christ. All they mentioned was Moroni coming, as if the history started in 1823. In some ways I was glad they skipped the First Vision, as this is so sacred that it is hard to have it reduced to a skeptical report.

? The grand climax to the show was a discussion of the Broadway show The Book of Mormon which was described as “very funny and very dirty” and has already grossed over one hundred million dollars.  This was instead of more than the merest mention of The Book of Mormon scripture and why Latter-day Saints value it.  Clark Johnson, who plays in the show, grew up Latter-day Saint, and went on a mission before he took his “long road”out of the Church because he didn’t feel like he could reach his full potential in the faith. That was it-the end of the show.

With some surprise, the reporter said of Latter-day Saints, “You would not be able to distinguish these people from any other except their total commitment to their faith.”  Yet why that commitment is so strong was not really explored.

Of course, the question was posed, “Would Latter-day Saints be more comfortable if Mitt talked more or less” about his faith?  Perhaps the idea was, as so many others have implored, “C’mon Mitt, go for it.”  We think this is a run for President, and he should stick to his message rather than getting sidetracked.  But for the rest of us-what a great opportunity this time gives us to answer questions about the faith we love so much.