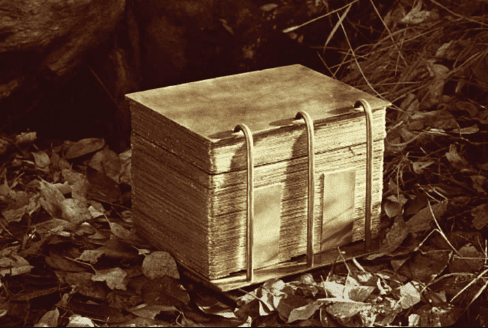 A Little-known Account of the Book of Mormon Witnesses

The following is from Daniel C. Peterson at his Sic Et Non blog. To see the original post, click here.

William E. McLellin was chosen as one of the Twelve Apostles in 1835, but was excommunicated from the Church of Jesus Christ of Latter-day Saints 1838.  However, he never abandoned his faith in the Book of Mormon, and one of the pillars of his faith rested upon his early, searching interviews with the witnesses to that book.  He was a highly intelligent man (and, it seems, a rather irascible one), and he was very careful and intent upon getting at the truth.  He left a number of statements on his investigations.  This one comes from a previously unpublished manuscript that he wrote between January 1871 and January 1872.  I find it fascinating:

In 1833, when mobbing reigned triumphant in Jackson Co. Mo. I and O. Cowdery fled from our homes, for fear of personal violence on Saturday the 20th day of July.  The mob dispersed, agreeing to meet again on the next Tuesday.  They offered eighty dollars reward for any one who would deliver Cowdery or McLellan in Independence on Tuesday.  On Mond[a]y I slipped down into the Whitmer’s settlement, and there in the lonely woods I met with David Whitmer and Oliver Cowdery.  I said to them, “brethren I have never seen an open vision in my life, but you men say you have, and therefore you positively know.  Now you know that our lives are in danger every hour, if the mob can only catch us.  Tell me in the fear of God, is that book of Mormon true?  Cowdery looked at me with solemnity depicted in his face, and said, “Brother William, God sent his holy angel to declare the truth of the translation of it to us, and therefore we know.  And though the mob kill us, yet we must die declaring its truth.”  David said, “Oliver has told you the solemn truth, for we could not be deceived.  I most truly declare to you its truth!!”  Said I, boys I believe you.  I can see no object for you to tell me false <hood> now, when our lives are endangered.  Eight men testify also to handling that sacred pile of plates, from which Joseph Smith <read off the> translation that heavenly Book.

One circumstance I’ll relate of one of these eight witnesses.  While the mob was raging in Jackson Co. Mo. in 1833 some young men ran down Hiram Page <in the woods> one of the eight <witnesses,> and commenced beating and pounding him with whips and clubs.  He begged, but there was no mercy.  They said he was <a> damned Mormon, and they meant to beat him to death!  But finally one then said to him, if you will deny that damned book, we will let you go.  Said he, how can I deny what I knowto be true?  Then they pounded him again.  When they thought he was about to breathe his last, they said to him, Now what do you think of your God, when he dont save you?  Well said he, I believe in God–Well, said one of the most intelligent among them, I believe the damned fool will stick to it though we kill him.  Let us let him go.  But his life was nearly run out.  He was confined to his bed for a length of time.  So much for a man who knows for himself.  Knowledge is beyond faith or doubt.  It is positive certainty.

I in company with <a> friend, <I> visited one of the eight witnesses <in 1869>–he only one who is now alive, and he bore a very lucid and rational testimony, and gave us many interesting particulars.  He was a young man when he had those testimonies.  He is <was then> sixty eight years old, and still he is firm in his faith.  Now I would ask what will I do with such a cloud of faithful witnesses, bearing such a rational and yet solemn testimony?  These men while in the prime of life, saw the vision of the angel, and bore their testimony to all people.  And eight men saw the plates, and handled them.  Hence these men all knew the things they declared to be positively true.  And that too while they were young, and now when old they declare the same things.

These paragraphs come from Mitchell K. Schaefer, ed., William E. McLellin’s Lost Manuscript (Salt Lake City: Eborn Books, 2012), 166-167.  The editorial marks (and McLellin’s curious misspelling of his own name) and the occasional omitted word are all faithfully reproduced and double-checked.

The witness whom McLellin visited in 1869 has to have been John Whitmer, who died in 1878.