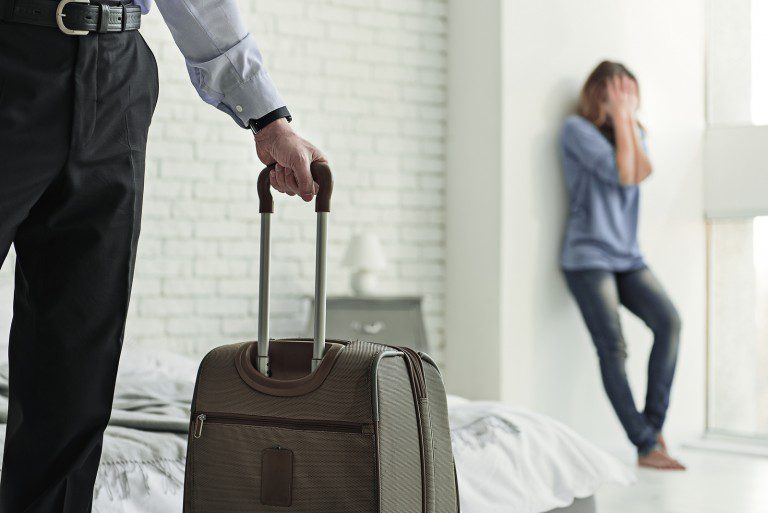 Your Hardest Family Question: My husband suddenly won’t work on our marriage

My husband and I have been married almost four years, two of which I spent in graduate school, we lost loved ones, had a major house renovation, and many other things have happened. For the past few months, we have been arguing. We got into huge arguments several times a month ago, and said some things we cannot take back. After our last argument, he said one of us had to leave and that this was no longer healthy. He told me he still loved me, but believed we are not repairable. Neither of us is willing to move out, so he said he would stay in the house and we would be like roommates until he could find a better solution. He even took off his ring and has not put it back on. We even spent Christmas in separate places. He’s now been going out of town to see guy friends of his that know him best. He has also gone out and not come home two different times.

He doesn’t text me hardly at all and barely speaks to me at the house. We’ve recently had a couple of emotional conversations, so I asked if we could start communicating more. He said he would see what he could do. Yet nothing really changed. He did help me out when I had the flu last weekend by staying in and getting me food. I asked him to dinner on Sunday but he said he wasn’t feeling well and maybe later this week. I then said I just would like to talk, no arguing, fighting, just want to know where we are at, he told me we will talk and that he doesn’t want to argue or fight either that it’s not worth it. Yet, it’s been days and we still haven’t talked about where we are and what he wants. He denies there is someone else.

I want to save our marriage but am dying inside from what he is doing and how we are living. I have been seeing a therapist to work on myself and fix the things I did wrong in the marriage and lost sight of. I told him I am working on me and he said he is working on him too. I just feel so lost and don’t know what to do or how to get him to check back in. I would greatly appreciate your advice!

You have both been through a lot together in your short time together. It sounds like these stressful events brought out some of your less admirable qualities. While I don’t know the particulars of how you hurt each other, it was obviously too much for your husband. It’s worth trying to understand why he believes your relationship isn’t repairable.

You might start looking at your own contribution to these arguments. Yes, you’re both engaged in a heated exchange, but this silent treatment is a boundary he’s setting to change the nature of the conversations. Are you trying to approach him the same way you’ve always approached him? Are you open to a different way of talking with him?

Celeste Headlee, author of “We Need to Talk”, recommends expressing your expectations right out the gate so he knows exactly why you want to speak with him.[i] Instead of throwing him an open-ended question like, “How are you feeling about us?”, You can let him know why you want to speak with him. For example, you might say something like, “I can see that you are cautious about speaking with me. I’ve not done a good job listening to you. I promise to give you my full attention to share why you feel we’re not repairable.” You can even set a time limit so he knows this won’t be a never-ending black hole of a conversation.

Lead with your own accountability and make it clear what he can expect from you in the conversation. He obviously doesn’t want the old interactions, so describe what you commit to do so he can more easily choose to engage. Keep it short and direct. And, of course, keep the conversational promises you make if he decides to talk with you.

He has strong opinions about the relationship, so there may be lots of feedback for you to consider. When he’s sharing, don’t use that as a springboard to vent your frustrations about his behavior. He’s not asking you what he can do better. If you want to invite him to share his views on the relationship, then respect that and keep the focus on his experience. He has less interest in saving the marriage right now, so he gets to go first in explaining his hurt.

Your husband’s behavior is speaking louder than his words. I don’t know if he’ll want to ultimately repair the marriage, but he doesn’t seem to be interested right now. You’re wise to work on yourself and understand how you contributed to the downfall of the marriage instead of passively waiting for him to come back. As you learn things about yourself, you might be tempted to bring these insights to him to prove that you’re healthier now. If you’re healthier, then just be healthy. Healthy people don’t explain why they’re so healthy. They are respectful, patient, accountable, and allow other people to have their own feelings and experiences.

Elder Jeffrey R. Holland used a powerful metaphor to explain how all of us have limits and the need to be sensitive to our partner’s capacity. He explains:

As a youth in England, Samuel Plimsoll was fascinated with watching ships load and unload their cargoes. He soon observed that, regardless of the cargo space available, each ship had its maximum capacity. If a ship exceeded its limit, it would likely sink at sea. In 1868 Plimsoll entered Parliament and passed a merchant shipping act that, among other things, called for making calculations of how much a ship could carry. As a result, lines were drawn on the hull of each ship in England. As the cargo was loaded, the freighter would sink lower and lower into the water. When the water level on the side of the ship reached the Plimsoll mark, the ship was considered loaded to capacity, regardless of how much space remained. As a result, British deaths at sea were greatly reduced.

Like ships, people have differing capacities at different times and even different days in their lives. In our relationships we need to establish our own Plimsoll marks and help identify them in the lives of those we love. Together we need to monitor the load levels and be helpful in shedding or at least readjusting some cargo if we see our sweetheart is sinking. Then, when the ship of love is stabilized, we can evaluate long-term what has to continue, what can be put off until another time, and what can be put off permanently. Friends, sweethearts, and spouses need to be able to monitor each other’s stress and recognize the different tides and seasons of life. We owe it to each other to declare some limits and then help jettison some things if emotional health and the strength of loving relationships are at risk.[ii]

Something profound changed for him. I don’t know why he snapped, but your willingness to stay soft, open, accountable, and inviting may build a bridge back to him so he can experience your relationship in a new way. Hopefully he’ll feel something different and want to try a new way of relating to you.

[i] Headlee, Celeste. We Need to Talk: How to Have Conversations that Matter, p. 57.

COMMENTS: There is ALWAYS the bigger picture - the spiritual lessons that both chose to experience here with one another in the pre-earth life - and these lessons are often designed /learned through much adversity / challenges in relationships with others. Understand your individual and mutual conditioning / thinking and expectations about marriage.that mostly form the basis of your problems. Remove all judgment of one another - you are only responsible for your individual life - not his/hers. Trust in the Lord with all your heart. Lean not to your own understanding of how your marriage relationship is going / should or must be. Acknowledge - thank the Lord for your current problems/challenges - and He will direct your paths - in his way - at his time - in the manner for your individual and mutual best good - even though to you the path may seem hopeless or you may seem unwilling to take the path that you have been given - trust in the Lord and his goodness and love for you both - for your best good - trust no matter what happens - he will abide with you and bring you peace - if not today, as it is meant to be. Love, Gary Dennis

I have been a steady reader of this column since it began, and I am married to an LCSW, with whom I discuss this column, and I have to say that this is the best, most fair reply that has been printed in any of your columns. It felt as if you went out of your way to not take sides or make assumptions. I can feel the writer's pain, but I can also feel the husband's pain. Your advise on how she could open up a dialogue with him was excellent; if followed she would be able to talk to him without having to throw up her defenses and "defend" herself, because the moment she does that the conversation will be over. Only knowing what little that is told in this letter, I get the feeling that listening to each other is what BOTH parties in this relationship might need. Again, excellent reply; thank you!