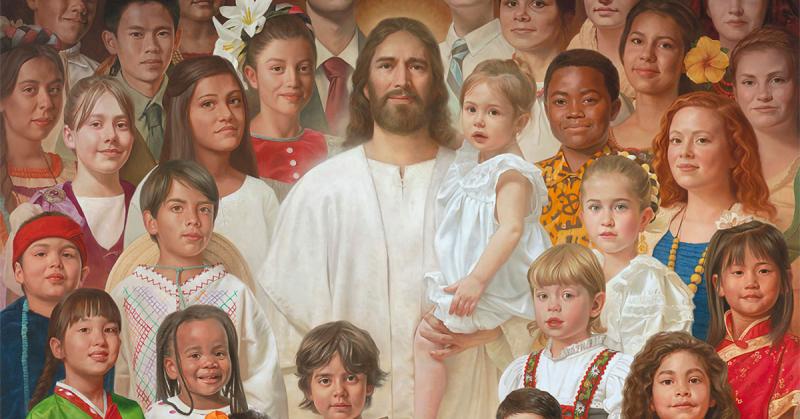 Why You Are Part of God’s Chosen People, Even When it Feels Like You Are Not

Cover image: I Am a Child of God by Howard Lyon.

The scriptures often refer to the promises made to Abraham and his descendants, and if you sit in church for long enough, you will probably hear a reference or two to the “chosen people” or “God’s covenant people.”1 As more and more people across the world join the church, many people may feel left out of this group, assuming that their less direct genealogical connection to Abraham may count for very little.2 Although this is a difficult and painful issue for some people, both the book of Galatians as well as the Book of Mormon teach us a new way to understand what it means to be Abraham’s seed.

Paul’s Epistle to the Galatians was written to a group of Celtic people called the Galatians who settled in Anatolia (what is today Turkey) in the third century BC.3 These people were more closely related to people in France and Ireland than they were to the people surrounding them in Anatolia, but they made the best of the situation and slowly began to adopt the culture of their neighbors.4Yet they remained outsiders in some ways. By as late as the fourth century AD, the scholar Jerome noticed that the people of Galatia were still speaking a language that was more like what people spoke in what is today France than anything like what their neighbors were speaking in Anatolia.5

Perhaps because they were already outsiders in relation to their neighbors, Paul’s comments about their status as “children of Abraham” may have been even more surprising to them than it might have been to other people Paul taught. They may have wondered how Paul could possibly say that they were children of Abraham, given their origins not only as Gentiles, but as Celts who ultimately hailed from Central Europe. They may have assumed that as far as cultural and genealogical connections to Abraham and the Middle East were concerned, they may as well have been from the moon as from the banks of the Danube.

Yet according to Paul, the Galatians could receive the blessings of the Abrahamic covenant as much as anyone else could. According to Galatians 3:7–9, faith is what brings us the blessings of the Abrahamic covenant, not a genealogical connection to Abraham: “Know ye therefore that they which are of faith, the same are the children of Abraham. And the scripture, foreseeing that God would justify the heathen through faith, preached before the gospel unto Abraham, saying, In thee shall all nations be blessed. So then they which be of faith are blessed with faithful Abraham.” Paul explained,

“… as many of you as have been baptized into Christ have put on Christ. There is neither Jew nor Greek, there is neither bond nor free, there is neither male nor female: for ye are all one in Christ Jesus. And if ye be Christ’s, then are ye Abraham’s seed, and heirs according to the promise” (Galatians 13:27–29).

The Book of Mormon

The Book of Mormon confirms Paul’s statements about what it means to be part of God’s chosen people. 2 Nephi 26:33 states that God invites everyone to “come unto him and partake of his goodness; and he denieth none that come unto him, black and white, bond and free, male and female; and he remembereth the heathen; and all are alike unto God, both Jew and Gentile.” No matter where someone is from or what their ethnic background is, God wants everyone to come to Him and denies them no blessings.6

Ultimately, he concluded, “the Lord esteemeth all flesh in one; he that is righteous is favored of God. But behold, this people had rejected every word of God, and they were ripe in iniquity; and the fulness of the wrath of God was upon them; and the Lord did curse the land against them, and bless it unto our fathers; yea, he did curse it against them unto their destruction, and he did bless it unto our fathers unto their obtaining power over it” (1 Nephi 17:35).

For Nephi, “he that is righteous is favored of God,” and ethnicity takes a backseat to righteousness and repentance. Because God loves all of His children, He “invites all to come unto him” and rejects no one because of ethnic origins or cultural background. All that are willing to keep the commandments can receive the blessings of the Abrahamic covenant if they have faith, as Nephi affirmed: Christ “manifesteth himself unto all those who believe in him … yea, unto every nation, kindred, tongue, and people … according to their faith” (2 Nephi 26:13).7

We often see racism and discrimination in the world around us, but the Book of Mormon and the New Testament teach us that this is not God’s way. Christ “loveth the world, even that he layeth down his own life that he may draw all men unto him. Wherefore, He commandeth none that they shall not partake of His salvation” (2 Nephi 26:24). Christ declares, ”Come unto me all ye ends of the earth, buy milk and honey, without money and without price” (v. 25).8

All those who may feel like they are not the children of Abraham, who may feel excluded because of their ethnic origins, remember Paul’s words to the Galatians and Nephi’s words to his family. Those people who are righteous and have faith in Christ will not be denied any blessings because of their background. That was true in Nephi’s time, it was true in Paul’s time, and it is true today.